Python’s elegant syntax and dynamic typing, together with its interpreted nature, make it an ideal language for scripting and rapid application development in many areas on most platforms. The Python interpreter and the extensive standard library are freely available in source or binary form for all major platforms from the Python Web site, and may be freely distributed. The same site also contains distributions of and pointers to many free third party Python modules, programs and tools, and additional documentation. Python Program to Add Two Numbers - The Crazy Programmer.

Python program to calculate the sum of elements in a list. Cppreference.com. C++ Core Guidelines. August 3, 2020 Editors: This is a living document under continuous improvement. 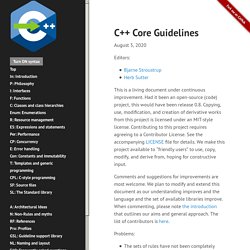 Had it been an open-source (code) project, this would have been release 0.8. Copying, use, modification, and creation of derivative works from this project is licensed under an MIT-style license. Contributing to this project requires agreeing to a Contributor License. Comments and suggestions for improvements are most welcome. Problems: The sets of rules have not been completely checked for completeness, consistency, or enforceability. You can read an explanation of the scope and structure of this Guide or just jump straight in: Supporting sections: You can sample rules for specific language features: You can look at design concepts used to express the rules: assertion: ???

This document is a set of guidelines for using C++ well. The guidelines are focused on relatively high-level issues, such as interfaces, resource management, memory management, and concurrency. Introduction summary: In.target: Target readership. Advice. C++ Praise. C++ - What is the easiest way to initialize a std. C++ Vector Library - push_back() Function - Tutorialspoint. Description The C++ function std::vector::push_back() inserts new element at the end of vector and increases size of vector by one. 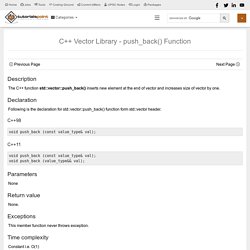 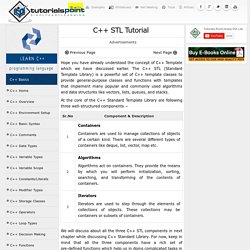 The C++ STL (Standard Template Library) is a powerful set of C++ template classes to provide general-purpose classes and functions with templates that implement many popular and commonly used algorithms and data structures like vectors, lists, queues, and stacks. At the core of the C++ Standard Template Library are following three well-structured components − We will discuss about all the three C++ STL components in next chapter while discussing C++ Standard Library. For now, keep in mind that all the three components have a rich set of pre-defined functions which help us in doing complicated tasks in very easy fashion. Let us take the following program that demonstrates the vector container (a C++ Standard Template) which is similar to an array with an exception that it automatically handles its own storage requirements in case it grows − Live Demo.

C++ - Fast way to write data from a std. C++ Multidimensional Arrays (2nd and 3d arrays) In C++, you can create an array of an array known as multi-dimensional array. 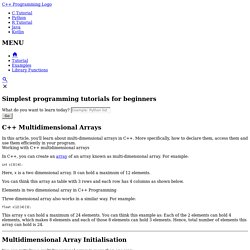 For example: int x[3][4]; Here, is a two dimensional array. It can hold a maximum of 12 elements. You can think this array as table with 3 rows and each row has 4 columns as shown below. Three dimensional array also works in a similar way. Float x[2][4][3]; This array can hold a maximum of 24 elements. Multidimensional Array Initialisation You can initialise a multidimensional array in more than one way. Matrix. Accelerated C++: Practical Programming by Example. Amazon Review If you don't have a lot of time, but you still want to learn the latest in C++, you don't have to learn C first. 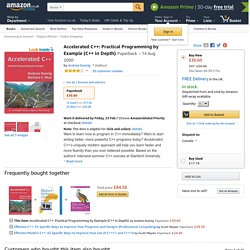 You might learn more by digging into existing language features and classes from the very beginning. That's the approach offered by Accelerated C++, a text that delves into more advanced C++ features like templates and Standard Template Library (STL) collection classes early on. This book can arguably get a motivated beginning programmer into C++ more quickly than other available tutorials. What separates this title from the rest of the pack is that it jumps right in with samples that take advantage of today's Standard C++, from streams to built-in container classes such as vectors and linked lists. C++ how to program , Deitel and Ditel. C++ Primer. Fundamental Algorithms in C++ Amazon.co.