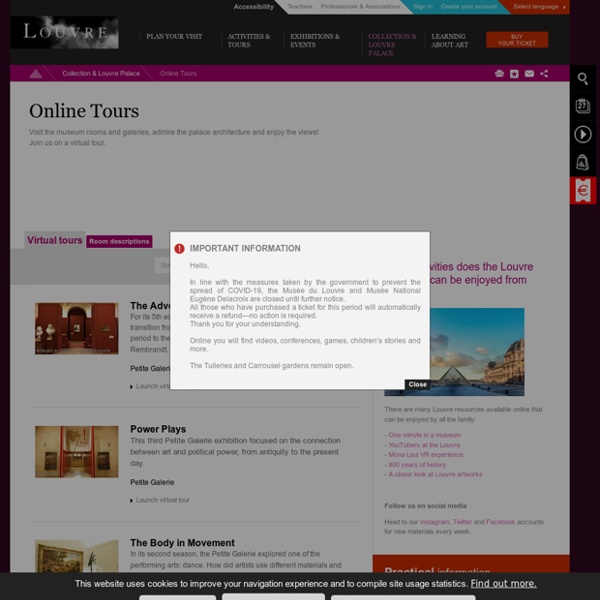 Museo Reina Sofia, Madrid, Espagne : histoire de l’art espagnol, mais aussi histoire de l’Espagne et de l’Europe, et encore : Guernica de Picasso ! Vous pourrez visiter le musée, du Palazio de Velazquèz au Palacio de cristal. Founded in 1990 after originally being created as an art centre, Museo Reina Sofía is among the culminating events of the Spanish transition to democracy, recovering Pablo Picasso's Guernica as well as an outstanding representation of the international avant-gardes and neo-avant-gardes. In short, the founding of this museum means the recuperation of the experience of modernity previously missing from the Spanish context and the opportunity to try out new models of narration from a periphery that is neither lateral nor derivative, but is rather an entry way for new stories, historiographic models and artistic episodes that tip the balance of the orthodox canon of the main museums. The institution no longer considers its task to be simply the transmission of culture. Instead, it works with other agents and institutions, creating networks and alliances that strengthen the public sphere and position Museo Reina Sofía as a reference of prime importance in the geopolitical South.

Collections - Eθνικό Αρχαιολογικό Μουσείο n The National Archaeological Museum is the largest museum in Greece and one of the most important in the world. Originally destined to receive all the 19th century excavations, mainly from Attica and other parts of the country, it gradually took the form of a central National Archaeological Museum and was enriched with finds from all parts of the Greek world. His rich collections, enumerating more than 11,000 exhibits, offer the visitor a panorama of ancient Greek culture from the prehistory to the late antiquity. The museum is housed in the imposing neoclassical building, built at the end of the 19th century in designs by L. Lange and eventually formed by Ernst Ziller. Its exhibition grounds, dozens of halls on each floor, cover an area of ​​8,000 m². and houses the five major permanent collections: The Collection of Prehistoric Antiquities, which includes works of the great civilizations that developed in the Aegean from the 6th millennium to 1050 BC.

Louvre Museum's Visitor Trails Here, Ingres transposed the antique theme of the female nude to the Near East, a place he had traveled to only in his dreams and the pretext for the sensual image of a naked woman in a harem—hence the title, The Large Odalisque—set against an exotic background. Until the end of his life, Ingres continued to paint exotic scenes and female nudes, one of his favorite subjects—as in The Turkish Bath—drawing on influences as diverse as Raphael, the Mannerists, and Persian miniatures. Whereas Ingres, like his master David, was a classical artist in terms of technique and his interest in antiquity, which he showed in other works, he distanced himself from this trend by giving priority to draftsmanship, pure lines, and sensual curves, distorting anatomical reality if necessary.

Google Street View Trekker in NSW National Parks Did you know you can explore NSW national parks online using Google Maps' Street View? Discover new places with a virtual tour of walking tracks, lookouts and campgrounds on the coast, deep within rainforests, and even in Outback NSW. Get 360 degree views of these incredible landscapes before setting out on your own adventure. Working in partnership with Google, NSW National Parks (NPWS) has captured imagery in over 50 national parks using Google's special backpack-mounted trekker. Guided Tour of The American Museum of Photography We bill ourselves as "A Museum Without Walls... For An Art Without Boundaries." Even though we have no walls, we do have "floors," separate areas for different activities. At the bottom of most pages, you'll find a navigation bar that will let you choose our Exhibitions floor, our Main Entrance floor, our Research Center or our Museum Shops. Just click on the place you want to visit. Or click on the Museum's logo and you'll find yourself transported to our Home Page.You're now at the Museum's Main Entrancefloor.

Alte Nationalgalerie, Staatliche Museen deBerlin :l’un des plus beaux musées de la capitale allemande. Retrouvez la visite virtuelle et toutes les collections: Friedrich, Menzel, Manet. The Alte Nationalgalerie is the original home of the Nationalgalerie, whose collections today are divided between the Neue Nationalgalerie, the Hamburger Bahnhof – Museum für Gegenwart – Berlin, the Friedrichswerdersche Kirche, Museum Berggruen and the Sammlung Scharf-Gerstenberg. The idea of establishing a cultural and educational centre across from the Berlin Palace dates back to the time of Friedrich Wilhelm IV, who dreamt of creating a "sanctuary for art and science" on the site. The basic architectural concept for the Alte Nationalgalerie – a temple-like building raised on a plinth decorated with motifs from antiquity – came from the king himself.

Clark Art - Browse Collections This website uses cookies to ensure you get the best experience on your website. Learn More DeclineGot it! In compliance with the Governor's order, the Clark is temporarily closed until at least May 18. Museum The Hermitage Museum, St. Petersburg, Russia State Hermitage is one of the largest museums in the world. Its exhibitions include over 3 million exhibits representing Antiquity, Western Europe, Middle East, Russia and many more epochs, countries and regions. Its foundation dates back to 1764, when Catherine the Great purchased a big collection of Western European paintings. The museum consists of five buildings located in the historical center of St. Petersburg on the Neva embankment.

The Met 360° Project This award-winning series of six short videos invites viewers around the world to virtually visit The Met's art and architecture in a fresh, immersive way. Created using spherical 360° technology, it allows viewers to explore some of the Museum's iconic spaces as never before. Viewed more than 11 million times, this series affords an access and a perspective typically unavailable to the public. Viewers can experience the magic of standing in an empty gallery after-hours, witnessing a bustling space in time-lapse, or floating high above The Met Cloisters for a bird's-eye view. We strung cables, removed protective covers from works of art, and rigged cameras up high, all to allow viewers to explore The Met as never before.