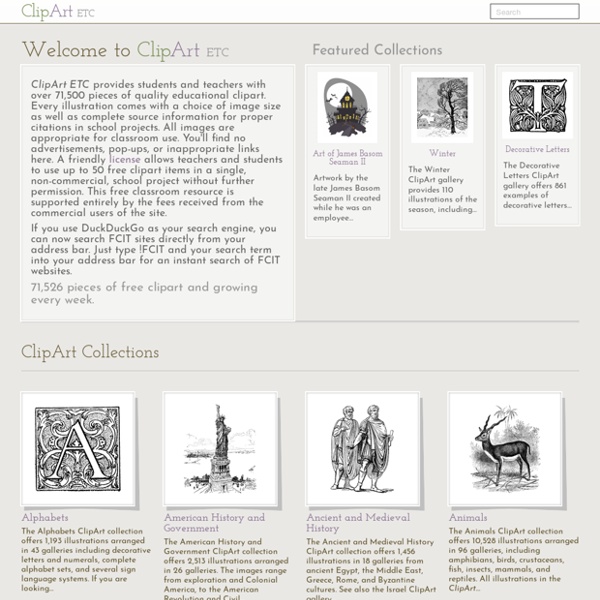 Psychedelic sixties The White Rabbit in Wonderland (East Totem West, 1967) Art By Joe McHugh Nick Mason David Gilmour Richard Wright The Doors/Jim Kweskin Jug Band, June 9 & 10, 1967 - Fillmore Auditorium Art by Bonnie MacLean. Rosemary’s Baby (1968) Three Geography Games Based on Google Maps and Google Earth One of the things that I emphasize to students before they embark on any kind of research or problem-solving task is to take a good long look at the information that they already have before them. To that end, I'll often request that they construct a list of what they know about a topic or problem before they begin to search. Playing one of the following three Google Maps-based games is a fun way to reinforce the concept of using prior knowledge and observations. GeoGuessr is an addictive geography game that is based on the Google Maps Street View imagery.

image collection- Black And White Drawings To download click on the picture to get a full size image. Right click and "save to" your computer desktop or a folder of your choice. This is how the original wing appeared in the patent drawing. I warped it in Photoshop so that it appears as it does below and in the final character. Gutenberg On August 26 2020, the Project Gutenberg website underwent some major changes. These changes had been previewed since early 2020, and visitors to the old site were invited to try the new site, including giving input via a brief survey. The old site is no longer available. If you found yourself on this page unexpectedly, it is because an old page was redirected here. Please use the navigation menus at the top of the page to find what you were looking for. All of the functionality, and most of the content, from the old site is still here - but in a different location.

whole brain teaching Are you familiar with Whole Brain Teaching? I discovered it online last fall while I was exploring information on how the brain learns. This is the first video I saw on the topic: You may notice in the video that the instructor (Coach B from WBT) keeps the students totally engaged, and uses many of the important brain based learning strategies: talking, using emotions, visuals, movement, teaching chunks of information, giving immediate feedback. Photos of The Great War It was supposed to be the war to end all war. For over four years World War I raged on, leaving in its wake a toll of death and destruction such as the world had never seen. These are the images of that time, an eternal testament to all those whose lives were lost or forever altered by The Great War. Europe Map with Countries, Map of Europe, European Countries Map Europe HistoryEurope was first inspired by the Classical Greek culture of the 8th-century B.C.It had a powerful influence on the Roman Empire that spread to Northern and Mediterranean Europe. The Romans had a profound impact on the growth of rich culture and architecture. After the collapse of Roman Empire in the west, Byzantine Empire emerged and survived (285-1450) in the east.

The World of Dante Note: Many of these maps are viewable with a pan and zoom feature. Click the associated image to view the details. Inferno Chart Reproduced with permission of the Museo Casa di Dante. The copyright to this illustration is held by the Unione Fiorentina of the Museo Casa di Dante. 11,700 Free Photos from John Margolies' Archive of Americana Architecture: Download, Use & Re-Mix Many connoisseurs of architecture are enthralled by the modernist philosophy of Le Corbusier, Frank Lloyd Wright, and I M Pei, who shared a belief that form follows function, or, as Wright had it, that form and function are one. Others of us delight in gas stations shaped like teapots and restaurants shaped like fish or doughnuts. If there’s a philosophy behind these insistently playful visions, it likely has something to do with joy…and pulling in tourists. Art historian John Margolies (1940-2016), responding to the beauty of such quirky visions, scrambled to preserve the evidence, transforming into a respected, self-taught photographer in the process.

EssayGator exam Help team will identify your strengths and weaknesses needed to successfully complete a graduation program.Read More: by bensonjennifer May 3