A Noise Level Meter built for the Classroom. 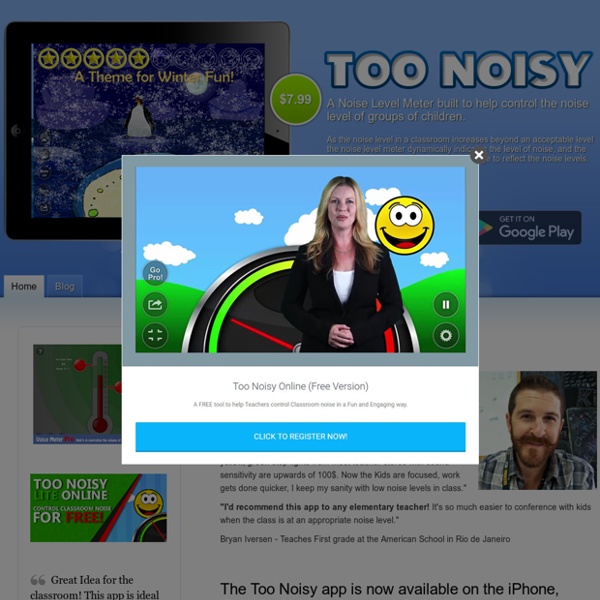 Related:  To be categorized

Elementary Nutrition Education - Childhood Health, Obesity Prevention, Nutrition Tools for Teachers, Elementary Schools, Parents Involvement, School- Home Partnerships Welcome Health & Nutrition Providers and Professional Educators Nourish Interactive is a completely free, English and Spanish website that provides nutrition educators and healthcare providers with a variety of interactive nutrition tools to assist you in teaching the key elements of nutrition to children and parents. We designed the website so that the parents’ webpages and nutrition tools complement the children’s games and nutritional messages. Each one of our computer games has free nutrition lesson plans.

What is Mystery Skype? (Skype) Mystery Skype is an education game, invented by teachers, played by two classrooms on Skype. The aim of the game is to guess the location of the other classroom by asking each other questions. It has totally transformed the way students learn about the world in my school.

YouAreHere - where kids learn to be smarter consumers! In our virtual mall, you can play games, design ads, chat with customers and store owners, and much more. You’ll learn key consumer concepts, such as how advertising affects you, how you benefit when businesses compete, how (and why) to protect your information, and how to spot scams. What better place to do it than at the mall! Each area of the mall focuses on a different topic. ‎Silent Film Studio on the App Store Love the nostalgic look of those old silent movies? It’s never been easier to create your own...instantly on your iPhone, iPod touch and iPad with Silent Film Studio. Right down to static, celluloid dirt and scratches and that old-time film look. Everything you need is right at your fingertips - no computer needed. It's simple to use, deceptively powerful, and loads of fun to play with.

Ideas for iPad Movie Projects (Stop Motion) The Popularity of Stop Motion Effects Stop motion movies date back to the early 20th century, but they have seen a resurgence of late with popular releases like Wallace and Gromit, Chicken Run, Coraline and Frankenweenie topping box offices around the world. So, how do they do that? The premise is simple.

KineMaster - Video Editor - Apps on Google Play KineMaster is a full-featured video editor for Android. KineMaster has powerful tools that are easy to use, like multiple video layers, blending modes, voiceovers, chroma key, speed control, transitions, subtitles, special effects, and so much more! Find out why creators love KineMaster for YouTube, TikTok, and Instagram and why journalists, educators, marketers, and vloggers use it professionally! Download KineMaster to create, edit, and share your own amazing videos! Features

Institute of Scrap Recycling Industries, Inc. ISRI and JASON are proud to partner on a national recycling awareness campaign to help students and educators understand the importance of recycling and the recycling industry, as well as the science, technology, engineering, and math (STEM) topics that relate to recycling. The campaign includes rich, standards-based, multimedia curricular experiences for students in grades K–12, to be composed of the following elements: an annual recycling competition, interactive Web-based experiences to enhance student engagement, classroom posters featuring ISRI’s key educational messages, age-appropriate hands-on activities for students in three grade bands from kindergarten through high school, fact sheets, live events with STEM role models, a national distribution network, strategies for school visits to ISRI facilities, and more. Visit isri.org (link is external) or watch this video (link is external) to learn more about the recycling industry.

Stop motion A clay model of a chicken, designed to be used in a clay stop motion animation. Stop motion is an animated-film making technique in which objects are physically manipulated in small increments between individually photographed frames so that they will appear to exhibit independent motion when the series of frames is played back as a fast sequence. Dolls with movable joints or clay figures are often used in stop motion for their ease of repositioning. Stop-motion animation using plasticine figures is called clay animation or "clay-mation". Not all stop motion, however, requires figures or models: stop-motion films can also be made using humans, household appliances, and other objects, usually for comedic effect. Stop motion using humans is sometimes referred to as pixilation or pixilate animation.

The Complete Guide To Twitter Hashtags For Education What is a hashtag? A word or phrase preceded by a “#.” How do hashtags work? Twitter can be a busy place with lots of tweets–and thus lots of “noise.”