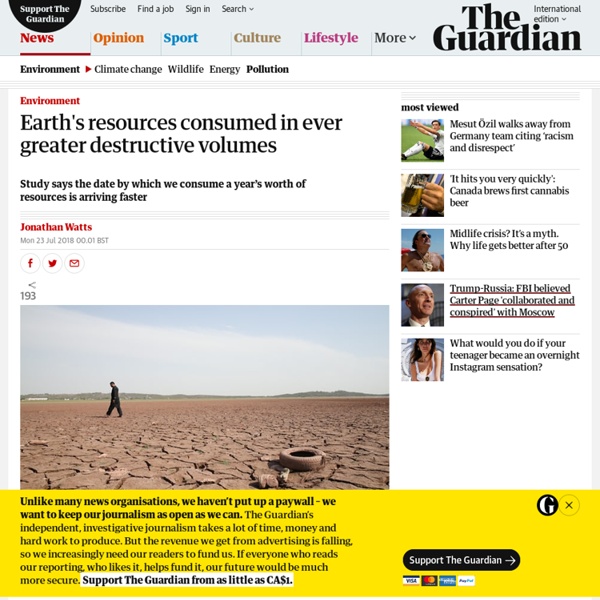 Humanity is devouring our planet’s resources in increasingly destructive volumes, according to a new study that reveals we have consumed a year’s worth of carbon, food, water, fibre, land and timber in a record 212 days. As a result, the Earth Overshoot Day – which marks the point at which consumption exceeds the capacity of nature to regenerate – has moved forward two days to 1 August, the earliest date ever recorded. To maintain our current appetite for resources, we would need the equivalent of 1.7 Earths, according to Global Footprint Network, an international research organisation that makes an annual assessment of how far humankind is falling into ecological debt. The overshoot began in the 1970s, when rising populations and increasing average demands pushed consumption beyond a sustainable level. Since then, the day at which humanity has busted its annual planetary budget has moved forward. Thirty years ago, the overshoot was on 15 October. The situation is reversible.

Related:  The Only Earth We Have • Resource management • Sustainability

*Technosphere (anthropocene): A planet's worth of human-made things has been weighed A new report has calculated the total mass of all the technology humans have produced, everything from buildings to cars and computers, and found it is an astounding 30 trillion tons. That is more than the total amount of living matter on Earth. It shows the sheer magnitude of the human impact on our planet, which is still growing. An international team led by the University of Leicester in England added up the mass of all our houses, factories, skyscrapers, right down to smartphones and ballpoint pens, as well as waste material in landfills, to come up with the staggering number that represents a mass of more than 50 kilograms for every square metre of Earth's surface.

Climate and economic risks 'threaten 2008-style systemic collapse' The gathering storm of human-caused threats to climate, nature and economy pose a danger of systemic collapse comparable to the 2008 financial crisis, according to a new report that calls for urgent and radical reform to protect political and social systems. The study says the combination of global warming, soil infertility, pollinator loss, chemical leaching and ocean acidification is creating a “new domain of risk”, which is hugely underestimated by policymakers even though it may pose the greatest threat in human history. “A new, highly complex and destabilised ‘domain of risk’ is emerging – which includes the risk of the collapse of key social and economic systems, at local and potentially even global levels,” warns the paper from the Institute for Public Policy Research. “This new risk domain affects virtually all areas of policy and politics, and it is doubtful that societies around the world are adequately prepared to manage this risk.” There are other potential cascades.

*Various graphs: Australia’s export performance in 2015 27 May 2016 Mark ThirlwellAustralian EconomyInternational Trade The recent release of supplementary data on international trade in services by the Australian Bureau of Statistics (ABS) has allowed DFAT to update its rankings of Australia’s leading trading partners and top 25 exports and imports. So, what do these numbers tell us about Australia’s export performance in 2015? The central message is that last year’s fall in commodity prices in general and the price of iron ore in particular dragged down overall export values, with this drop only partially offset by increases in the value of exports of services, food and manufactures. The main feature of the headline numbers was a decline in the overall value of exports.

Concrete: the most destructive material on Earth In the time it takes you to read this sentence, the global building industry will have poured more than 19,000 bathtubs of concrete. By the time you are halfway through this article, the volume would fill the Albert Hall and spill out into Hyde Park. In a day it would be almost the size of China’s Three Gorges Dam. In a single year, there is enough to patio over every hill, dale, nook and cranny in England. After water, concrete is the most widely used substance on Earth. If the cement industry were a country, it would be the third largest carbon dioxide emitter in the world with up to 2.8bn tonnes, surpassed only by China and the US. These 5 technologies are transforming the way we consume everyday products Take a look around you. Many of the products you see were made using industrial processes that are at least a century old. That is set to change. New technologies developed in laboratories around the world are reinventing the materials and processes used to make the goods we consume every day. From plastics to cement, this transition is reducing the environmental footprint of industries, often enhancing the finished product’s usefulness too. Here are five everyday products that are now being made of extraordinary things:

Concrete is tipping us into climate catastrophe. It's payback time Tucked away in volume three of the technical data for Britain’s £53bn high speed rail project is a table that shows 20m tonnes of concrete will have to be poured to build the requisite 105 miles of track, culverts, bridges and tunnels. It is enough, it has been calculated, to pave over the entire city of Manchester. A more modest 3 million tonnes of concrete will be needed to construct the Hinckley B nuclear power station in Somerset, and the proposed new runway at Heathrow will require one million tonnes. Cement, the key component of concrete and one of the most widely used manmade materials, is now the cornerstone of global construction.

Contribute to a podcast on how we can make fashion more sustainable In the next episode of our We Need to Talk About podcast, we’ll be exploring how an individual can rethink their relationship to clothes and make easy choices towards sustainable shopping. We’ll be looking at the psychological cycles of buying, as well as the changes that need to come from government level. We want to gather questions from readers and supporters who are experts in related fields, but also those who have personal experiences or reflections to share. In particular we’re looking for positive solutions-based ideas about how we can improve the situation. Lucy Siegle, MP Mary Creagh, and others will be discussing this issue in our next recording.

Explainer: what dust from the Sahara does to you and the planet At this time of year in Europe, you may have noticed something in the air. Dust-laden winds blowing from the Sahara desert cause “seasonal haze episodes” that can even result in mud or “blood” rain. In West Africa, which experiences haze episodes between November and March, the dust-laden trade wind is called the Harmattan and has important implications, not only for soil fertility but also radio communication, visibility at airports and in shipping lanes, and also on livelihoods – and health. Dry skin and cracked lips are regular symptoms of exposure to the haze. But it presents more serious problems for asthmatics – and can lead to silicosis, a lung disease caused due to a high content of quartz in the dust. In some areas the dust blocks the sunlight enough to make temperatures drop significantly.

'We're wholly disappointed': the industry responds to Guardian concrete week This week Guardian Cities is investigating the impact of concrete, revealing the terrible destruction it causes to the planet: • Concrete is responsible for up to 8% of the world’s emissions of carbon dioxide, more than any material after fossil fuels. • Concrete in cities exacerbates flooding that kills thousands of people every year. • Its dust can be toxic. • It uses a tremendous amount of fresh water, roughly 10% of the global supply, often in communities where water for irrigation is in short supply.

Hard living: what does concrete do to our bodies? Michael has worked with concrete for 27 years. His job involves “breaking out” walls and floors, mixing concrete, injection work and drilling. These days, he suffers from chronic breathlessness, has had a cough for around three years and struggles to walk long distances. It is suspected that an emphysema-like condition called silicosis is to blame.

Related:
Related:  The Only Earth We Have   -  Resource management   -  Sustainability