Describe a photo or picture 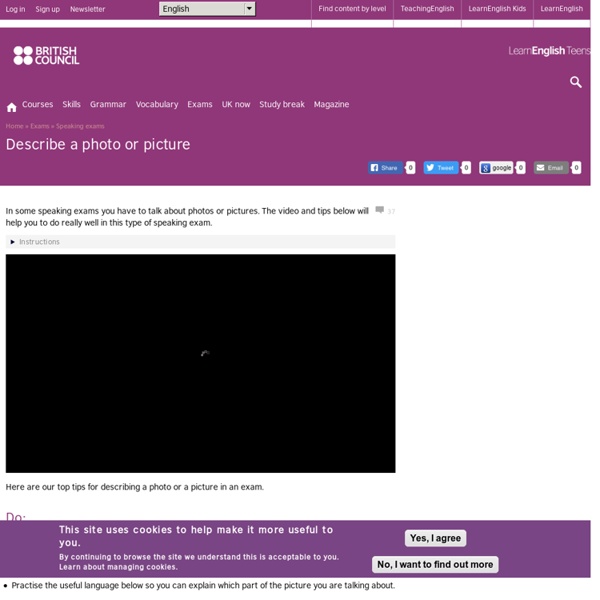 Photographer Tracks Down People He Snapped In His Hometown Almost 40 Years Ago To Recreate The Remarkable Images Photo © by Chris Porsz/Geoff Robinson Paramedic Chris Porsz spent hours walking around the city of Peterborough, Cambridgeshire (Great Britain) in the late 1970s and 80s, taking candid shots of punks and policemen, siblings and sweethearts, traders and teenagers. More than three decades later, Chris has reconstructed a handful of his favourite photos from his collection. He spent the last seven years tracking down the people in his pictures and persuading them to pose once again. His hard work paid off and he has now published his photos in a new book, “Reunions”. More info: Chris Porsz, Facebook (h/t: metro, dailymail)

Giving your opinion Jack: Oh! Hi Gemma. How’s it going?Gemma: Oh. The EFL SMARTblog: Describing photos (comparing, contrasting and speculating) You are going to practise language for; Describing photosComparing and contrasting photos (discussing similarities and differences)Speculating on what might be happeningReacting to photos (giving opinions) Discuss Look at the presentation. Follow the instructions and talk about some of the photos Write The language used here for comparing and contrasting / speculating is also useful for writing discussion / argument essays.

London artist Rich McCor remodels most iconic landmarks using clever cutouts Londoner Rich McCor has turned the London Eye into a bicycle, Big Ben into a watch and the Trafalgar Square lions into playful kittens. And the 28-year-old, who works for a creative agency, does it all with nothing more than paper and a pair of scissors. Using just intricately-designed cut outs, this innovative artist has impressively transformed some of the capital's most familiar sights into his own celebrated brand of quirky artwork. McCor's first attempt at transforming a traditionally well-recognised London landmark - Big Ben - happened earlier this year, using a paper watch strap to obscure the clock face Rich said: 'My favourite cut out so far is the bottle of champagne at the fountains near Tower Bridge. It took about 50 snaps until I got the right angle, depth of field and timing.

Daily Bread - Photographs and text by Gregg Segal Food is a central part of our lives, and yet we tend to take it for granted. We’re often too busy to give much thought to what we’re eating or how it affects our health. In the West, there’s a growing awareness about the harm of eating processed foods loaded with salt, fat and sugar, but awareness hasn’t led to widespread change: obesity rates are climbing, and since corn syrup came along, the incidence of diabetes has tripled. For the first time in many generations, life expectancy has decreased in America, and the main culprit is empty calories—processed, packaged junk foods promoted to us by big-budget commercials. As the saying goes, the hand that stirs the pot rules the world.

Meet Lauren Singer - zero waste girl Presenter: The average American produces 4.3lbs (four point three pounds) of trash a day. That’s almost sixteen hundred pounds a year but if we took some simple steps we could go off the trash grid and minimise thousands of pounds of waste into just a single jar! Going off Grid Lauren Singer: So, this is my trash jar. Presenter: Two years of trash in this tiny little jar. Lauren: Yep!

Motivating speaking activities for lower levels Planning time has been shown to increase production in speaking tasks. Lower level learners often find it especially difficult to speak spontaneously, so these activities incorporate 'thinking time' during which learners can prepare for speaking by planning what they are going to say, and asking the teacher or using a dictionary to look up missing vocabulary. The following activities are relatively short, with minimal materials preparation time for the teacher. They are designed for use as a warmer or a filler in the middle or at the end of a class. providr What’s wrong with today’s society is a popular topic of discussion these days. Usually, technology is at the heart of the issue, but illustrators John Holcroft and Steve Cutts prove modern society is even more problematic than we thought. John Holcroft is a retro illustrator based in England who creates simple 50s inspired art to illustrate serious subjects. You can see more of John Holcroft’s illustrations at www.johnholcroft.com.

Sticky Grammar: Personality types I'm sharing an activity I developed to work on personality types and synonyms with teenagers in a B2 level. Since I knew it would be appealing to them, I used the movie "Divergent" and although the task was challenging, their being acquainted with the story helped consideably. After looking up some words in the dictionary and discussing the different profile a person in each faction should have, they had no problems whatsoever categorizing many different words which weren't familiar to them. I'll show you how I did it.