How the mega-rich are preparing for the apocalyse - CNN Style 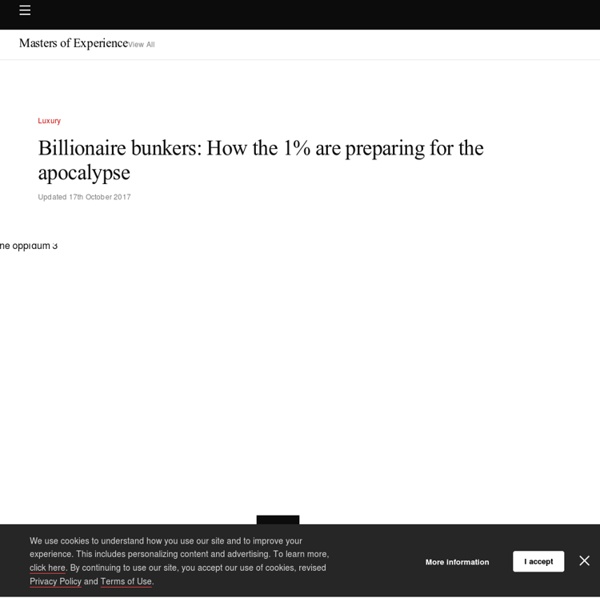 Written by Elizabeth Stamp, CNN Say "doomsday bunker" and most people would imagine a concrete room filled with cots and canned goods. The threat of global annihilation may feel as present as it did during the Cold War, but today's high-security shelters could not be more different from their 20th-century counterparts. A number of companies around the world are meeting a growing demand for structures that protect from any risk, whether it's a global pandemic, an asteroid, or World War III -- while also delivering luxurious amenities. "Your father or grandfather's bunker was not very comfortable," says Robert Vicino, a real estate entrepreneur and CEO of Vivos, a company he founded that builds and manages high-end shelters around the world. "They were gray. Doomsday demand The company's plate steel bunkers, which are designed to last for generations, can hold a minimum of one year's worth of food per resident and withstand earthquakes. 1/17 – Five-star shelter Designer ark Nuclear hardened homes

Related:  What the Hell • Contemporary History

Almost all world’s oceans damaged by human impact, study finds Just 13% of the world’s oceans remain untouched by the damaging impacts of humanity, the first systematic analysis has revealed. Outside the remotest areas of the Pacific and the poles, virtually no ocean is left harbouring naturally high levels of marine wildlife. Huge fishing fleets, global shipping and pollution running off the land are combining with climate change to degrade the oceans, the researchers found.

Election interference has been going on for years. The reason? Voter purges In every American election there are some voters who show up to their polling place ready to cast a ballot, only to find their name isn’t on the registration list. The reason? Voter purges, an often flawed effort to update voter rolls by removing voters’ names from registration lists. Virginians fell victim in 2013, when nearly 39,000 voters were removed when the state relied on faulty data to determine which names should be deleted. Weedkiller found in granola and crackers, internal FDA emails show US government scientists have detected a weedkiller linked to cancer in an array of commonly consumed foods, emails obtained through a freedom of information request show. The Food and Drug Administration (FDA) has been testing food samples for residues of glyphosate, the active ingredient in hundreds of widely used herbicide products, for two years, but has not yet released any official results. But the internal documents obtained by the Guardian show the FDA has had trouble finding any food that does not carry traces of the pesticide. “I have brought wheat crackers, granola cereal and corn meal from home and there’s a fair amount in all of them,” FDA chemist Richard Thompson wrote to colleagues in an email last year regarding glyphosate.

How the black middle class was attacked by Woodrow Wilson’s administration When Woodrow Wilson arrived in the nation’s capital in March 1913, he brought with him an administration loaded with white supremacists. Wilson’s lieutenants segregated offices, harassed black workers and removed black politicians from political appointments held by black men for more than a generation. Racism had always been a part of life in Washington and its government buildings, but the U.S. civil service had never been formally segregated prior to Wilson’s inauguration. Our brains rapidly and automatically process opinions we agree with as if they are facts By Christian Jarrett In a post-truth world of alternative facts, there is understandable interest in the psychology behind why people are generally so wedded to their opinions and why it is so difficult to change minds. We already know a lot about the deliberate mental processes that people engage in to protect their world view, from seeking out confirmatory evidence (the “confirmation bias“) to questioning the methods used to marshal contradictory evidence (the scientific impotence excuse).

We don’t want billionaires’ charity. We want them to pay their taxes “Charity is a cold, grey loveless thing. If a rich man wants to help the poor, he should pay his taxes gladly, not dole out money at a whim.” It is a phrase commonly ascribed to Clement Attlee – the credit actually belongs to his biographer, Francis Beckett – but it elegantly sums up the case for progressive taxation. According to a report by the Swiss bank UBS, last year billionaires made more money than any other point in the history of human civilisation. Their wealth jumped by a fifth – a staggering $8.9tn – and 179 new billionaires joined an exclusive cabal of 2,158. Media Giant Sinclair Hired Reporter From Russian Propaganda Outlet RT Who Produced ‘Must-Run’ ‘Deep State’ Segment The United States' largest owner of television stations, Sinclair Broadcast Group, mandated that its outlets run a segment on the so-called deep state that was produced by a former reporter for the Russian propaganda outlet RT, according to a new report. The "must-run" piece aired on March 21 and featured Sebastian Gorka, the former adviser to President Donald Trump, lamenting the existence of a deep state—a popular conspiracy theory in some circles that longtime career public servants in the government are working to subvert the U.S. government. Trump has repeatedly complained about such a mysterious rogue network.

Trump prophecy and other Christian movements: 3 essential reads A new film, “Trump Prophecy,” will be shown in some limited theaters on Oct. 2 and 4. The film is an adaptation of a book, co-authored by Mark Taylor, a retired firefighter, who claimed he received a message from God in 2011 that the Trump presidency is divinely ordained. Liberty University film students are reported to have participated in the making of the film. How Russia is growing its strategic influence in Africa Much has been made about China’s role and profile in Africa and the factors underlying its activities on the continent. Less debated is the spread and depth of Russia’s contemporary presence and profile in Africa. There was a strong Russian influence in Africa during the heyday of the Soviet Union. The post-independence governments of Angola, Mozambique, Guinea-Bissau, Democratic Republic of Congo, Egypt, Somalia, Ethiopia, Uganda and Benin at some point all received diplomatic or military support from the Soviet Union. But this began to change after the superpower started to collapse in December 1991. More than a quarter of a century later Russia’s President Vladimir Putin seems to have new aspirations in Africa.

A democracy or a kleptocracy? How South Africa stacks up South Africans have been held spellbound by the torrent of evidence of corruption emerging from two parallel commissions of inquiry – into state capture, and the fitness to hold office of two senior officials of the National Prosecuting Authority. These strengthen perceptions that South Africa under former President Jacob Zuma – from May 2009 to March 2018 – transformed from a democracy into a “kleptocracy”: a country ruled by thieves. The country scored only 43 out of 100 on Transparency International’s Corruption Perceptions Index for 2018 Corruption Perceptions Index for 2018, down from 47 in 2009. So the question is: is it indeed the case that South Africa has become a kleptocracy?