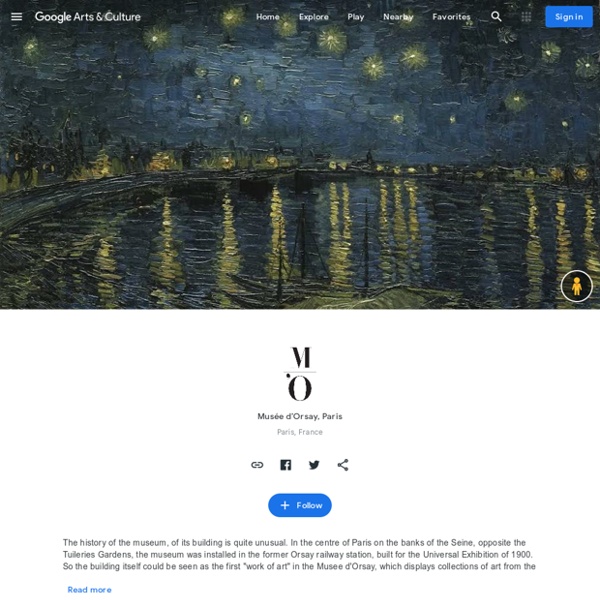 People Trust Museums More Than Newspapers. Here Is Why That Matters Right Now (DATA) - Colleen Dilenschneider It always matters. But new information lends particular insight into the important role that audiences expect museums to play. Are museums perceived as experts – and are they trusted? To what extent? Louvre Museum's Visitor Trails Here, Ingres transposed the antique theme of the female nude to the Near East, a place he had traveled to only in his dreams and the pretext for the sensual image of a naked woman in a harem—hence the title, The Large Odalisque—set against an exotic background. Until the end of his life, Ingres continued to paint exotic scenes and female nudes, one of his favorite subjects—as in The Turkish Bath—drawing on influences as diverse as Raphael, the Mannerists, and Persian miniatures. Whereas Ingres, like his master David, was a classical artist in terms of technique and his interest in antiquity, which he showed in other works, he distanced himself from this trend by giving priority to draftsmanship, pure lines, and sensual curves, distorting anatomical reality if necessary. This odalisque has three vertebrae too many.

Baltimore Museum of Art Please note: From January 2021 until January 2022, the Samuel H. Kress Study Room will be closed in anticipation of an inventory and collection move. Additionally, the BMA’s Prints, Drawings & Photographs Department will enact an external loan moratorium. If your institution requires object loans for exhibitions during this period, all requests must be made in writing to the PDP department by June 30, 2020. Whitney Museum of American Art, New York , United States As the preeminent institution devoted to the art of the United States, the Whitney Museum of American Art presents the full range of twentieth-century and contemporary American art, with a special focus on works by living artists. The Whitney is dedicated to collecting, preserving, interpreting, and exhibiting American art, and its collection—arguably the finest holding of twentieth-century American art in the world—is the Museum’s key resource. The Museum’s signature exhibition, the Biennial, is the country’s leading survey of the most recent developments in American art.Innovation has been a hallmark of the Whitney since its beginnings.

Musée d'Orsay Art museum, Design/Textile Museum, Historic site in Rue de Lille Paris, France The Musée d'Orsay ( MEW-zay dor-SAY, mew-ZAY -⁠, French: [myze dɔʁsɛ]) is a museum in Paris, France, on the Left Bank of the Seine. It is housed in the former Gare d'Orsay, a Beaux-Arts railway station built between 1898 and 1900. The museum holds mainly French art dating from 1848 to 1914, including paintings, sculptures, furniture, and photography. It houses the largest collection of impressionist and post-Impressionist masterpieces in the world, by painters including Monet, Manet, Degas, Renoir, Cézanne, Seurat, Sisley, Gauguin, and Van Gogh.

MoMA Sees Reputation Boost After Displaying Muslim Artists (DATA) - Colleen Dilenschneider Here’s what market research reveals about MoMA’s decision to display artwork from artists hailing from the Muslim-majority nations affected by the original travel ban. Here’s the scene: In early February, The Museum of Modern Art in New York rehung parts of its permanent collection with works by artists from the majority-Muslim nations whose citizens were blocked from entering the United States as a result of the end-of-January travel ban. The action received a lot of press. Data suggest that high-propensity visitor confidence in cultural organizations is at a low point right now, as it was when MoMA made this highly-visible decision in support of its mission. With some cultural organizations taking stands (e.g.

MASP - Museu de Arte de São Paulo Assis Chateaubriand The Museu de Arte de São Paulo is a private, nonprofit museum founded by Brazilian businessman Assis Chateaubriand, in 1947, as Brazil’s first modern museum. Chateaubriand invited Italian art dealer and critic Pietro Maria Bardi to serve as MASP’s director, a position he held for nearly forty-five years. Acquired through donations from the local society, MASP’s first artworks were selected by Bardi and became the most important collection of European art in the Southern Hemisphere. Today, MASP’s collection contains more than 8.000 works, including paintings, sculptures, objects, photographs, and costumes from a wide range of periods, encompassing art from Africa, Asia, Europe, and the Americas. Besides the permanent exhibition of its collection, MASP organizes a compre­hensive program of temporary exhibitions, courses, and talks, as well as musical, dance, and theater presentations.

Vermont History and Art The expansive collection includes the best work of local artists, photographers, inventors, craftspeople, businesses, and factories. Approximately 30,000 objects, 15,000 photographs, 1,600 rare books and over 120 linear feet of archival material represent the region’s diverse arts, rich history, and culture of innovation from the 18th century to the present. Selections from our collection are on exhibit in our galleries. MoMA The Museum of Modern Art, New York, United States Founded in 1929, The Museum of Modern Art (MoMA) in midtown Manhattan was the first museum devoted to the modern era. Today MoMA’s rich and varied collection offers a panoramic overview of modern and contemporary art, from the innovative European painting and sculpture of the 1880s to today's film, design, and performance art. From an initial gift of eight prints and one drawing, the collection has grown to include over 150,000 paintings, sculptures, drawings, prints, photographs, architectural models and drawings, and design objects; approximately 22,000 films and four million film stills; and, in its Library and Archives, over 300,000 books, artist books, and periodicals, and extensive individual files on more than 70,000 artists.

The Hermitage Museum, St. Petersburg, Russia State Hermitage is one of the largest museums in the world. Its exhibitions include over 3 million exhibits representing Antiquity, Western Europe, Middle East, Russia and many more epochs, countries and regions. Its foundation dates back to 1764, when Catherine the Great purchased a big collection of Western European paintings. The museum consists of five buildings located in the historical center of St. Petersburg on the Neva embankment. The Winter Palace was built in 1754-1762 by Francesco Bartolomeo Rastrelli.