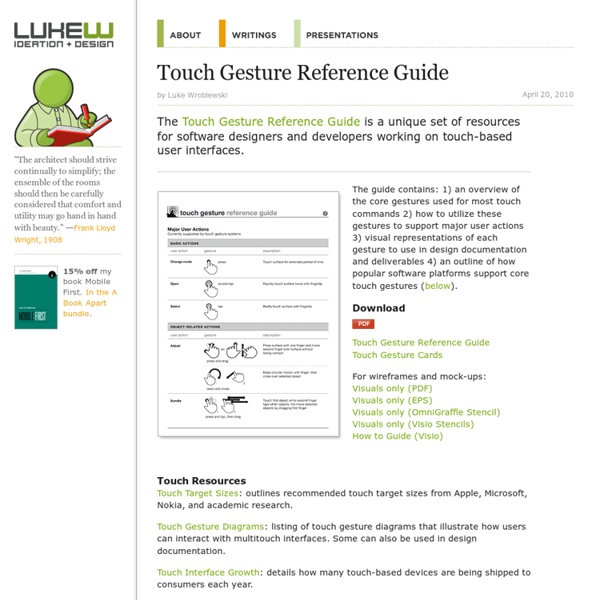 The Touch Gesture Reference Guide is a unique set of resources for software designers and developers working on touch-based user interfaces. The guide contains: 1) an overview of the core gestures used for most touch commands 2) how to utilize these gestures to support major user actions 3) visual representations of each gesture to use in design documentation and deliverables 4) an outline of how popular software platforms support core touch gestures (below). Download Touch Gesture Reference GuideTouch Gesture Cards For wireframes and mock-ups:Visuals only (PDF)Visuals only (EPS)Visuals only (OmniGraffle Stencil)Visuals only (Visio Stencils)How to Guide (Visio) Touch Resources Touch Target Sizes: outlines recommended touch target sizes from Apple, Microsoft, Nokia, and academic research. Touch Gesture Diagrams: listing of touch gesture diagrams that illustrate how users can interact with multitouch interfaces. Platform Support How popular software platforms support core touch gestures.

A Comprehensive Guide To Mobile App Design About The Author Nick Babich is a developer, tech enthusiast, and UX lover. He has spent the last 10 years working in the software industry with a specialized focus on … More about Nick Babich … (This article is kindly sponsored by Adobe.) There are many things to consider when designing for mobile. We’re sure that this detailed guide will help you get rid of that headache when building apps.

The Relevance of User Experience: Using Every Opportunity to Impress Users Is it possible to calculate the ROI of great design? What about the cost-per-acquisition of a customer who purchases software based on its user experience? There are no second chances for first impressions. Accessibility Screen readers may automatically announce a control’s type or state through a sound or by speaking the control name before or after the accessibility text. Search Search field Download over Wi-Fi only

Touchscreen Braille Writer Lets the Blind Type on a Tablet One group of people has traditionally been left out of our modern tablet revolution: the visually impaired. Our slick, button-less touchscreens are essentially useless to those who rely on touch to navigate around a computer interface, unless voice-control features are built in to the device and its OS. But a Stanford team of three has helped change that. Tasked to create a character-recognition program that would turn pages of Braille into readable text on an Android tablet, student Adam Duran, with the help of two mentor-professors, ended up creating something even more useful than his original assignment: a touchscreen-based Braille writer.

Touch Target Sizes People interact with touch-based user interfaces with their fingers. So user interface controls have to be big enough to capture fingertip actions without frustrating users with erroneous actions and tiny targets. Ok, so how big? In the iPhone Human Interface Guidelines, Apple recommends a minimum target size of 44 pixels wide 44 pixels tall. Touchscreens UX: Godsend or disaster? Note: A guest post by Jesse Kunze – More details about Jesse after the post. Touchscreens have taken off – they have went from a rarity, to pressure based touchscreens such as on the Palm Centro, to mostly capacitive, multi-point touchscreens such as iOS products, or most Android devices. As a plus, they are fairly intuitive to use, so you may be wondering why I would ever even think to consider them a disaster in the UX area of design. In fact, you may think that touchscreens will soon take over the whole arena, and you will never get to use a button again.

Misused mobile UX patterns – Zoltan Kollin If you are an experienced designer, you probably agree that being inspired by others is not stealing in UI design. It’s best practice research. It’s using design patterns. It’s following the guidelines. It’s making sure to use patterns that your users are familiar with to create usable interfaces. Some might say that sticking to the guidelines and following others will kill creativity and, at the end of the day, all apps will look the same.

Hamburger menu alternatives for mobile navigation If you’re working on digital products, you have already read dozens of articles describing how and why the hamburger navigation on mobile (and desktop!) hurts UX metrics due of its low discoverability and efficiency. (You can read some of best articles on the topic here, here, here, and here.) Luckily, more and more sites and apps are experimenting with alternative, more efficient solutions for this very problem. None of the ideas listed here is better than the others, their viability and performance obviously depend on the content and the context.

The guide may have missed one. The iPad entire hand finger open then closing together to return to home. by hfernety Nov 22