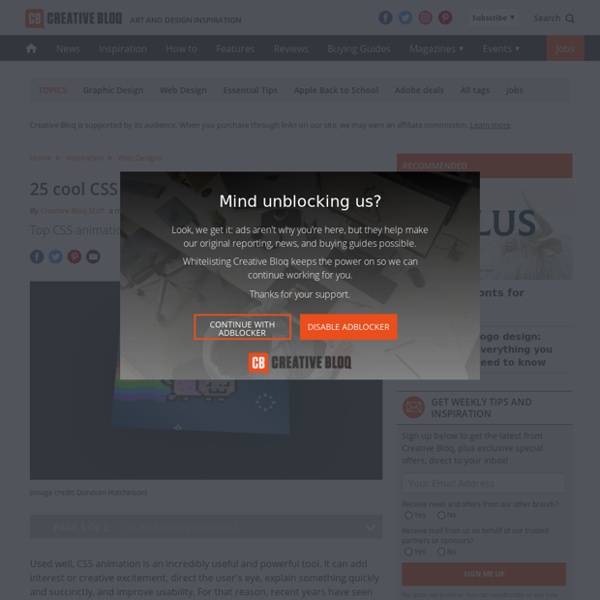 Used well, CSS animation is an incredibly useful and powerful tool. It can add interest or creative excitement, direct the user's eye, explain something quickly and succinctly, and improve usability. For that reason, recent years have seen more and more animation on sites and in app. In this article, we round up some of the coolest CSS animation examples we've seen, and show you how to recreate them. Read on for a range of in-depth tutorials and inspiring effects (and links to their code) to explore. What is CSS animation? CSS animation is a method of animating certain HTML elements without having to use processor and memory-hungry JavaScript or Flash. While it may seem limited when it comes to animation, CSS is actually a really powerful tool and is capable of producing beautifully smooth 60fps animations. The golden rule is that your CSS animations shouldn't be overblown – even a small movement can have a big impact, and too much can be distracting and irritating for users. 01. 02. 03.

8 Snippets That Show the Power of CSS Grid By now, we’ve seen some impressive examples of what CSS Grid can do. But it seems like we’re just starting to scratch the surface of what this newfangled way of creating layouts is capable of. As designers continue to experiment, they’re not only finding ways to solve common roadblocks that were faced before CSS Grid was around, they’re also taking things a step further. What we’re beginning to see is the potential for implementing layouts that are quite unique and perhaps darn-near impossible using other methods.

30 Pure CSS Animation Snippets & Demos Open source code has ushered in a new era of front-end web development. Beginners and experts alike can save time and stress by working with pre-built code snippets. The following gallery consists of 30 different snippets for creating animated effects with pure CSS. All of these code snippets can be found in online cloud IDE platforms. 14 CSS Flat Buttons Collection of hand-picked free HTML and CSS flat button code examples. Author Andrej January 25, 2018 Made with

Creating 3D worlds with HTML and CSS by Keith Clark Last year I created a demo showing how CSS 3D transforms could be used to create 3D environments. The demo was a technical showcase of what could be achieved with CSS at the time but I wanted to see how far I could push things, so over the past few months I’ve been working on a new version with more complex models, realistic lighting, shadows and collision detection. This post documents how I did it and the techniques I used.

CSS Selectors Cheatsheet - FrontEnd30 selectors cheatsheet ID Selector: #a { } The following are the possible ways to create professional animations in SVG: – Medium Export your SMIL animations from a graphics application. The standard way to produce SVG animations with SMIL is to create them in applications like Adobe Animate CC and similar others (see the section below for a list), and then using plugins like Flash2svg to export them in SVG. The Flash2svg add-on, created by the very talented Tom Byrne, is a marvel.

CSS vs SVG: Styling Checkboxes and Radio Buttons : Adobe Dreamweaver Team Blog This is the second article in a series of articles comparing some commonly-used CSS techniques to their SVG counterparts, showing the pros and cons of each, in an attempt to help you make a better decision as to which of these two to choose when solving common design problems on the web. In the previous post, we talked about creating textured text effects using both CSS and SVG, and came to the conclusion that SVG is currently more capable and powerful than CSS is in doing that. In this post, we’ll tackle custom HTML form styling—specifically checkbox and radio inputs. Form elements are particularly not the easiest elements to style with CSS, as you might already know.

CSS, JS or SMIL: What Should You Use For Animations? Web designers usually have three different tools available at their disposal for creating animations. These tools are CSS, JS or SMIL. But the bigger question here is- which is the one that offers maximum benefits in terms of functionality and near perfect designs? Well, each of these tools have their own set of pros and cons. And that’s why, it makes sense to compare all three in regards to specific web design requirements in order to arrive at a well-informed design decision, every time.

Top Free CSS3 Code Generators Newer online tools & webapps allow developers to create rapid websites without manually writing each individual line of code. Frontend development is one area that has seen a lot of growth in the way of frameworks & code libraries. But many developers also forget about code generators and their value in building websites. The following resources are completely free webapps that can generate CSS3 code for patterns, gradients, or even browser prefixed properties. If you write frontend code then these resources can save you a lot of time and offer repeatable snippets for future project work. 1.

How to create dynamic buttons with CSS 3D Last year we developed the new Orangina website with Achtung, with the aim of creating something that felt organic and playful. However, one simple feature turned out to be quite challenging: the buttons. The unorthodox shapes we were after can be tedious to create using CSS. 20 Best CSS Animations on CodeCanyon There was a time in internet history when you had to use Flash if you wanted to add some visual effects to your website beyond an animated GIF. Fast forward to today, and we find Flash dead and things like CSS3 and HTML5 bringing fantastic animations and effects to the web. If you want to add some great CSS animations to your website or next web project, here's a list of the 20 best CSS animations on CodeCanyon to get you started:

An Introduction To Graphical Effects in CSS : Adobe Dreamweaver Team Blog Over the past couple of years, CSS has gotten a set of new properties that allow us to create quite advanced graphical effects right in the browsers, using a few lines of code, and without having to resort to graphics editors to achieve those effects. If you are like me, then that sounds like music to your ears. I don’t do well in graphics editors and would choose a code path over a graphical editor path any day. CSS now allows us to do more graphical work right in our text editors. Gravify The Problem A long, long time ago (in the summer of 2014), when I did everything in my stylesheet, I came across a peculiar problem. I wanted to use CSS3 to give a ball object the effect of bouncing in accordance with the natural laws of physics. I scoured the internet for some way to breathe gravity into this ball.