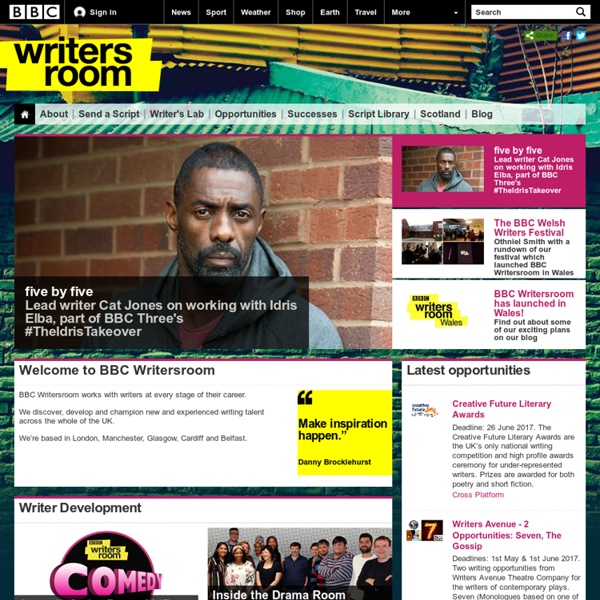 12 Useful Websites to Improve Your Writing by Johnny Webber 1. Words-to-Use.com – A different kind of thesaurus. 2. Shot-by-Shot Style Film Script (1) Scene settings and camera angles start at left margin and are in all caps. (2) For scene descriptions set left margin at 20 and go to 70 on the right (the right margin). (3) For character name set left margin at 40 and put in all caps. (4) For parenthetical descriptions use left margin of 35 and right margin of 50. (5) For dialogue use left margin of 30 and right margin of 65. Free Language Tutorials: Basic Phrases, Vocabulary, Grammar, and Pronunciation in 20 Languages Currently, twenty languages are available: 17 Indo-European and 3 non-Indo-European. There are also Foreign Service Institute (FSI) courses available in HTML format as well as two comparative tutorials for those who want to learn two languages simultaneously. Lists of vocabulary and verb conjugations are available for some Romance and Germanic languages, as well as other helpful ideas, resources and links for learning foreign languages. Some of the tutorials also include audio resources and online exercises, indicated by the headphones and notebooks below. The following pages are not language-specific tutorials, but instead focus on learning languages in general:

The Psychology of Writing and the Cognitive Science of the Perfect Daily Routine Reflecting on the ritualization of creativity, Bukowski famously scoffed that “air and light and time and space have nothing to do with.” Samuel Johnson similarly contended that “a man may write at any time, if he will set himself doggedly to it.” And yet some of history’s most successful and prolific writers were women and men of religious daily routines and odd creative rituals. (Even Buk himself ended up sticking to a peculiar daily routine.) Creative Writing These OWL resources will help you with the basics of creative writing. This section includes resources on writing poetry, fiction, and creative nonfiction. Fiction Writing Basics This resource discusses some terms and techniques that are useful to the beginning and intermediate fiction writer, and to instructors who are teaching fiction at these levels.

TV Writing This site will be of plenty of interest to TV fans, but fundamentally it's for people who want to take their love of TV and transform it into something more practical: actually creating telly that people want to see. These scripts are here because the only way to learn how to write a TV script is to read A LOT of other TV scripts, and there aren't many places you can do that. So here you can study scripts for existing shows, some of your old favourites, and many that never even made it to air. Figure out what makes an episode work, how to format that spec, why a pilot failed and how to write in four, five or six acts. And when you've figured it all out and got your show on air - send me your scripts!

The Internet Can Cultivate Writing. Good Writing. Image from LoadingArtist.com Almost anyone who cares about language and knows about or uses the Internet has been guilty at one time or another of demonizing the world wide web for its effects on the English language. “The Internet makes it easy for people, including professional writers, to publish writing publicly without editing.” “The Internet encourages casual writing and doesn’t reinforce proper writing skills.” David Foster Wallace on Why You Should Use a Dictionary, How to Write a Great Opener, and the Measure of Good Writing By Maria Popova “Readers who want to become writers should read with a dictionary at hand,” Harvard psycholinguist Steven Pinker asserted in his indispensable guide to the art-science of beautiful writing, adding that writers who are “too lazy to crack open a dictionary” are “incurious about the logic and history of the English language” and doom themselves to having “a tin ear for its nuances of meaning and emphasis.” But the most ardent case for using a dictionary came more than a decade earlier from none other than David Foster Wallace. In late 1999, Wallace wrote a lengthy and laudatory profile of writer and dictionary-maker Bryan A.