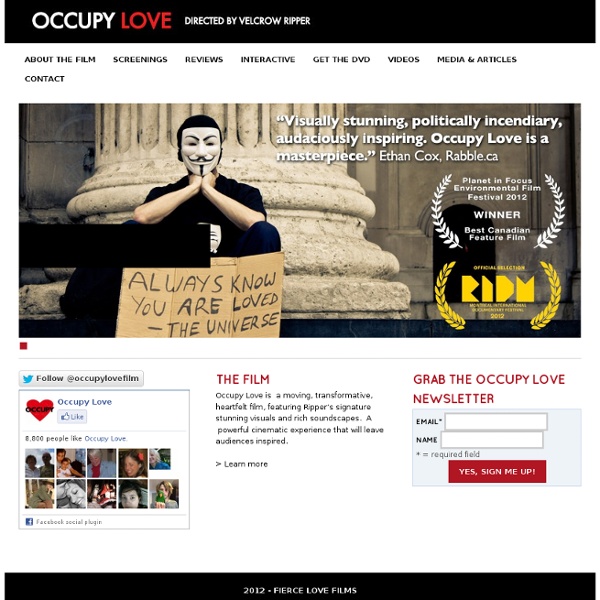 How to Occupy the Noosphere – TedX IAN’S NOTE: This talk represents my own personal synthesis from artists, activists, Occupiers, rabble rousers, revolutionaries and evolutionaries that I’ve had the privilege to meet during my short time on this planet. A sincere bow as well to my friends, supporters, and teachers – which I am forever indebted. I had a lot of fun with this talk. Thanks to the TedX organizers and volunteers, fellow speakers, and all the lovely people of Victoria who made this an amazing event. Please SHARE this video if you’re inspired. WATCH THIS TALK WITH SUBTITLES: Greek, Spanish, French, and Portuguese TedX synopsis: An ardent filmmaker and media activist, Ian MacKenzie is dedicated to capturing and sharing glimpses of emerging human paradigms. Full Transcript: The first time I saw this mask was in the 2006 film “V for Vendetta.” When they searched the catacombs of parliament, they found Guy Fawkes guarding 36 barrels of explosives. My grandmother calls these masks “kind of creepy.” This is love. Fire.

Homepage | Fiercelight - Where Spirit Meets Action gezipark: fr - 2013-06-04 02:00:04 +0200 TUR | FR | ENG | GRE | ITA | GER | ESP News from / Nachrichten / Νέα από / informations / Notizie (da) 4.6.2013 (Istanbul Time): Archetypes of Dissent Radical politics is defined by opacity, anonymity and dissimulation … and by invisibility: by the political presence of absence. The power of surprise, of secret organization, of rebelling, of demonstrating and plotting covertly, of striking invisibly, and in multiple sites at once, is the key element that the Invisible Committee, anonymous authors of The Coming Insurrection, affirm for confronting a power whose firepower is vastly superior. To be explicitly visible, to appear explicitly – in a maneuver, in organizing, even in an occupation –“is to be exposed, that is to say above all, vulnerable.” Here Guy Fawkes and black ski masks become emblems of veritable nobodies, of invisible underground men and women, of people without qualities who want to disguise their inner qualities, who shun visibility and have little desire to be the somebody the world wants them to be. These bodies are publicly expressive bodies yet are bodies weary of revealing too much of themselves.

Protests in Turkey Part of Growing Cycle of Discontent (Source: Protests in Turkey entered their fifth day today, with demonstrators heading into the streets in cities across the country. The protests, which were initially aimed at protesting the demolition of Istanbul’s Gezi park, have transformed, because of police aggression, to include more general grievances with the Turkish government. Mashallah News provides a good recap of the demonstrations’ development, thus far: “In Istanbul, just 1.5% of the land is devoted to public green space, of which nine acres are located in Gezi park. In a much anticipated speech on June 1, Turkish Prime Minister Recep Tayyip Erdogan responded to the growing protest movement. “Prime Minister Recep Tayyip Erdogan… speaking about the police attacks on protesters, is defiant — he says of those who are demonstrating about the re- development of Gezi Park, ‘There are games being played….Nobody has the right to protest against the law and democracy.’ government.

Would You Rather Be Over-Informed or Happy? Not long ago I wrote a blog post that quickly resonated with thousands of people called “Living in a Brainwashed Culture of Urgency.” I want to take that discussion to the next level highlighting not only the habit in our culture toward urgency, but also to being overly informed. The reality is our digital machines make it so easy to get an abundance of information at the touch of a fingertip. For the most part, the need to know all the latest news whether it’s social, political, sports, health, or what-have-you actually gets in the way of our happiness. But, it seems like we need all that information. Do we? Somehow the media has us at the digital counter saying, “Super-Size me please.” Like an addiction to food, most of the time we ingest it because it’s either a habit and we don’t know what else to do, or it’s a way for us to check out from feeling bored, anxious or generally uncomfortable with the moment. Be on the lookout for moments of “checking” the media.

Occupy Europe: How a generation went from indifferent to indignant The most significant current youth movement in Europe started with a tweet on Justin Bieber, the boyish Canadian crooner. On May 15, following a rally against education cuts at Madrid's main square, a cluster of 40 students stayed on, talking into the night. Spain, like Greece and Italy, faces huge public deficits. The government has been cutting outlays for basic services like schools, health care, and social welfare. While college attendance in Spain is a success story, youth unemployment has risen to a horrific 44 percent. So on Puerta del Sol square, the kids were hashing it out. The tweet distilled perfectly frustrations among youth that Europe, Spain, their politicians, the banks, the system, their lives – all are in trouble and need to change. Yet some Rubicon was crossed on May 15. Today, their idea has spread across southern Europe to Rome and Athens and the far corners of Spanish cyberspace, where the group has 70,000 participants. Yes, they want jobs. It's pretty utopian.

Al Gore: Internet is Changing Thinking The Nobel Prize winner and former vice president talks global networks, Marshall McLuhan, and how computing is changing what it means to be human. Mario Anzuoni/Reuters Technology and the "World Brain" Writers have used the human nervous system to describe electronic communication since the invention of the telegraph. In 1851, only six years after Samuel Morse received the message "What hath God wrought?" Since the nervous system connects to the human brain and the brain gives rise to the mind, it was understandable that one of the twentieth century's greatest theologians, Teilhard de Chardin, would modify Hawthorne's metaphor yet again. The supercomputers and software in use have all been designed by human beings, but as Marshall McLuhan once said, "We shape our tools, and thereafter, our tools shape us." The change being driven by the wholesale adoption of the Internet as the principal means of information exchange is simultaneously disruptive and creative.

Take The Square | Squares around the world The Revolution is evolving Globalizing Dissent, From Tahrir Square to Liberty Plaza The winds of change are blowing across the globe. What triggers such change, and when it will strike, is something that no one can predict. Last Jan. 18, a courageous young woman in Egypt took a dangerous step. Asmaa Mahfouz was 25 years old, part of the April 6 Youth Movement, with thousands of young people engaging online in debate on the future of their country. photo: Ramy Raoof Similar acts of protest spread to Egypt, where at least four men attempted self-immolation. Nine months later, Asmaa Mahfouz was giving a teach-in at Occupy Wall Street. I asked how it felt to be in the United States, which had for so long supported the Mubarak regime in Egypt. The Egyptian revolution has not been without consequences for her. Her arrest provoked a worldwide response, with groups ranging from the Muslim Brotherhood to Amnesty International condemning it. The arrests are happening here in the U.S. now, at many of the protest sites across the country. © 2011 Amy Goodman