What Media Teach Kids About Gender Can Have Lasting Effects? 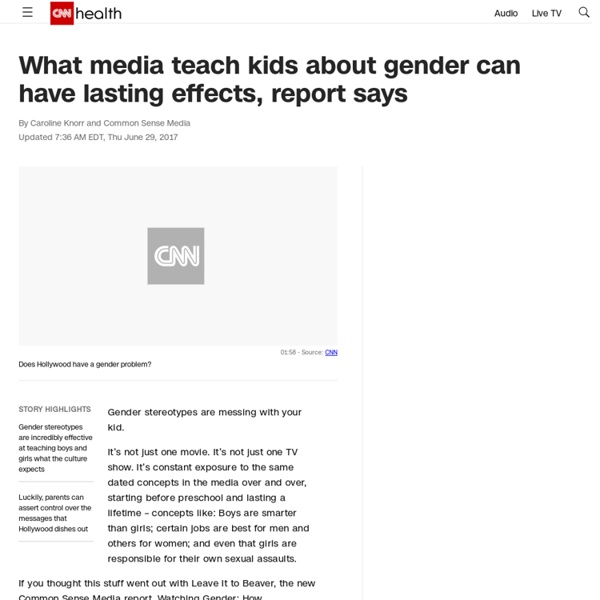 Story highlights Gender stereotypes are incredibly effective at teaching boys and girls what the culture expects Luckily, parents can assert control over the messages that Hollywood dishes out Gender stereotypes are messing with your kid. It’s not just one movie. It’s not just one TV show. If you thought this stuff went out with Leave It to Beaver, the new Common Sense Media report, Watching Gender: How Stereotypes in Movies and on TV Impact Kids’ Development, will put you right back in June Cleaver’s kitchen. According to the report, which analyzed more than 150 articles, interviews, books, and other social-scientific research, gender stereotypes in movies and on TV shows are more than persistent; they’re incredibly effective at teaching kids what the culture expects of boys and girls. What makes these messages stick – and harder for parents to counteract – is that they’re timed for the precise moment in kids’ development when they’re most receptive to their influence. At this age, kids:

How Stereotypes in Movies and on TV Impact Kids' Development [downloadable] - CHC Resource Library A new Common Sense Media study shows that learning gender roles from movies and TV shows has real consequences on kids’ self-esteem, relationships, and even their future careers. The Common Sense Media report, Watching Gender: How Stereotypes in Movies and on TV Impact Kids’ Development analyzes more than 150 articles, interviews, books, and other social-scientific research and finds that gender stereotypes in movies and on TV shows are widespread and very influential — teaching children what the culture expects of boys and girls. According to the report, a lifetime of viewing stereotypical media becomes so ingrained it can ultimately affect kids’ career choices, self-worth, relationships, and ability to achieve their full potential. Key Findings: Download the 19-page report to learn more about this research, and read this Common Sense Media blog post for recommendations on actions parents can take to counteract gender stereotypes. Do you have concerns about your child?

Gender stereotypes in mass media. Case study: Analysis of the gender stereotyping phenomenon in TV commercials. Mass media play a significant role in a modern world, by broadcasting information in fast pace and giving entertainment to vast audiences. They consist of press, television, radio, books and the Internet. The latter is now the most developing medium, however, TV also has a wide field of influence. By creating a certain type of message, media can manipulate people’s attitude and opinions. I would like to focus on this problem by investigating commercials structure; I will also attempt to specify gender stereotypes, which are used in advertising as a persuasion technique. Stereotypes

AI assistants like Siri and Alexa are perpetuating sexist stereotypes, UN says The report by UNESCO warns of the negative consequences of the personal assistants, claiming they perpetuate the idea that "women are obliging, docile and eager-to-please helpers, available at the touch of a button or with a blunt voice command." It also highlighted the passive and polite responses the assistants give when users make sexually abusive remarks, warning that their algorithms are reinforcing sexist tropes. "The assistant holds no power of agency beyond what the commander asks of it," the report states. The influence of television on children Author: Witt, Susan D. Source: v. 76 no5 (annual theme issue) (2000) p. 322-4 ISSN: 0009-4056 Number: BEDI00016560 Copyright: The magazine publisher is the copyright holder of this article and it is reproduced with permission. Further reproduction of this article in violation of the copyright is prohibited. Children often internalize gender role stereotypes from books, songs, television, and the movies (Thorne, 1993).

Parents’ Gender Roles Predict Children’s Aspirations and Beliefs Summary How do parents’ beliefs about gender and their gendered behaviours affect their children’s aspirations? This study conducted tests with 326 children and their parents to investigate this question. It found that mothers’ explicit beliefs about gender roles – such as associating women with the home and men with work – predicted their children’s beliefs.

How Toys Impact Children's Development Children Learn Quickly: a Short Lesson in Neuroplasticity Children are extremely fast learners. For newborns, the world is a flood of information and they absorb it like a sponge. Connections between neurons in the brain called 'synapses' form, and because children have the ability to take in large amounts of information, the number of connections in a young child's brain (particularly babies and toddlers) are far greater than an adult's. This is because, unlike adult brains which ignore irrelevant information, the developing brain takes in everything, and forms neural connections that are virtually useless. As the child develops, certain synapses which are used more and more are strengthened and become more efficient.

Unisex toy store in Strasbourg challenges pink/blue divide Issued on: 06/12/2019 - 15:23 Walk into most any toy store in France, and the colours will hit you: on one side pink boxes of dolls, on the other, blue boxes of cars and construction kits. In Strasbourg, one store is trying to change this by offering a setting where toys are neither for girls or boys. Gender Stereotypes in a Children's Television Program Introduction Women are underrepresented in domains that require intensive mathematical skills (National Science Foundation, 2015; National Science Board, 2016). This bias is crucial to the larger economy and contributes to gender inequity in income: More women in science, technology, engineering, and mathematics (STEM) would diversify the workforce, and mathematically intensive STEM fields usually provide high-status career options (National Science Foundation, 2015). Drawing on expectancy-value theory (Eccles et al., 1983), gender differences in STEM careers can be linked to early emerging gender differences in math motivational dispositions. These are rooted in different socialization processes for girls and boys such as the gender stereotypes children encounter in their environments (see Wigfield et al., 2015). Television programs are one potential source of gender stereotypes for children.

Social Learning Theory Application: School Nearly a half-century ago, educational theorist and researcher Albert Bandura coined the term ‘Social Learning Theory’ to describe the transfer of knowledge among students who learned not just from a teacher expert or a textbook but from each other. Even though all learners were at the same developmental stage, they observed each other, imitated learning actions and modeled them for others. Implicit in this practice are the attitudes and emotional responses to environments that are modeled and imitated as well. Social learning creates a social context. As learners adopt habits and attitudes, the atmosphere affects personality development and a social learning atmosphere helps develop norms, values, and attitudes that benefit everyone. This kind of learning is continuous and reciprocal; as long as peers are in the same environment, learning takes place in multiple situations and at multiple levels.