The Origin of Gender. Gender stereotypes. The Multiple Dimensions of Gender Stereotypes. Introduction There is no question that a great deal of progress has been made toward gender equality, and this progress is particularly evident in the workplace. 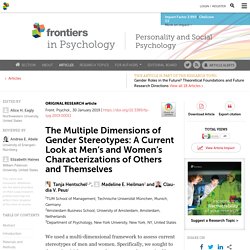 There also is no question that the goal of full gender equality has not yet been achieved – not in pay (AAUW, 2016) or position level (Catalyst, 2016). In a recent interview study with female managers the majority of barriers for women’s advancement that were identified were consequences of gender stereotypes (Peus et al., 2015). There is a long history of research in psychology that corroborates this finding (for reviews see Eagly and Sczesny, 2009; Heilman, 2012). These investigations support the idea that gender stereotypes can be impediments to women’s career advancement, promoting both gender bias in employment decisions and women’s self-limiting behavior (Heilman, 1983).

Have gender stereotypes changed over time? 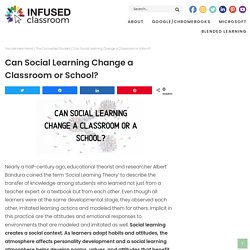 Even though all learners were at the same developmental stage, they observed each other, imitated learning actions and modeled them for others. Implicit in this practice are the attitudes and emotional responses to environments that are modeled and imitated as well. Social learning creates a social context. As learners adopt habits and attitudes, the atmosphere affects personality development and a social learning atmosphere helps develop norms, values, and attitudes that benefit everyone. 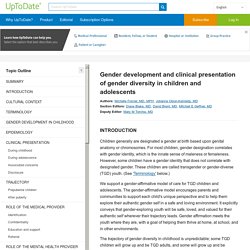 For most children, gender designation correlates with gender identity, which is the innate sense of maleness or femaleness. However, some children have a gender identity that does not correlate with designated gender. These children are called transgender or gender-diverse (TGD) youth. (See 'Terminology' below.) Children’s Gender Development: Associations With Parental Sexual Orientation, Division of Labor, and Gender Ideology. Helping kids learn about gender. Children's Social Learning From Television Programmes. ABSTRACT - This paper assesses advertising effects on children and adolescents from a social learning theory perspective, emphasizing imitative performance of vicariously reinforced consumption stimuli. 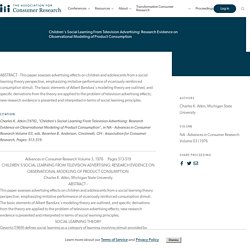 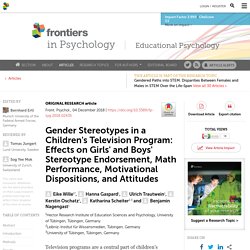 This bias is crucial to the larger economy and contributes to gender inequity in income: More women in science, technology, engineering, and mathematics (STEM) would diversify the workforce, and mathematically intensive STEM fields usually provide high-status career options (National Science Foundation, 2015). Drawing on expectancy-value theory (Eccles et al., 1983), gender differences in STEM careers can be linked to early emerging gender differences in math motivational dispositions. These are rooted in different socialization processes for girls and boys such as the gender stereotypes children encounter in their environments (see Wigfield et al., 2015). What Media Teach Kids About Gender Can Have Lasting Effects? 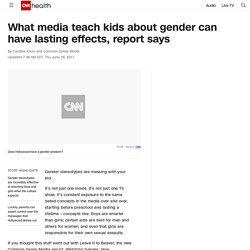 It’s not just one movie. It’s not just one TV show. How Stereotypes in Movies and on TV Impact Kids' Development [downloadable] - CHC Resource Library. A new Common Sense Media study shows that learning gender roles from movies and TV shows has real consequences on kids’ self-esteem, relationships, and even their future careers. 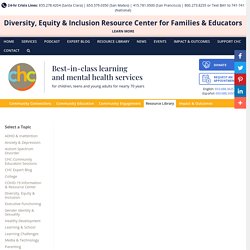 The Common Sense Media report, Watching Gender: How Stereotypes in Movies and on TV Impact Kids’ Development analyzes more than 150 articles, interviews, books, and other social-scientific research and finds that gender stereotypes in movies and on TV shows are widespread and very influential — teaching children what the culture expects of boys and girls. According to the report, a lifetime of viewing stereotypical media becomes so ingrained it can ultimately affect kids’ career choices, self-worth, relationships, and ability to achieve their full potential. Key Findings: Download the 19-page report to learn more about this research, and read this Common Sense Media blog post for recommendations on actions parents can take to counteract gender stereotypes. Parents’ Gender Roles Predict Children’s Aspirations and Beliefs. Summary How do parents’ beliefs about gender and their gendered behaviours affect their children’s aspirations? 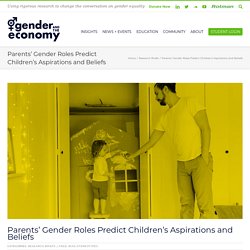 This study conducted tests with 326 children and their parents to investigate this question. How Parents Influence Kids' Gender Roles? Gender Identity and Expression in the Early Childhood Classroom: Influences on Development Within Sociocultural Contexts (Voices) Schools Are Teaching Gender and Sexual Identity.