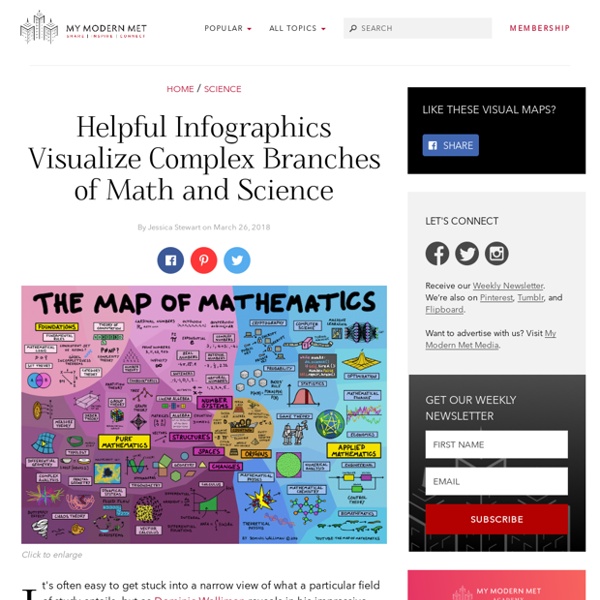 Click to enlarge It's often easy to get stuck into a narrow view of what a particular field of study entails, but as Dominic Walliman reveals in his impressive science infographics, there's much more than meets the eye when thinking of particular STEM subjects. Walliman demonstrates the diversity and complexity of biology, chemistry, computer science, physics, and mathematics in visual maps that explore the breadth of each field. Walliman, who also created animated videos exploring his science infographics, manages to pack all the shades of each complex field on one page. For instance, the Map of Mathematics travels from the origins and foundations of the field to the differences between pure mathematics and applied mathematics. Likewise, chemistry is divided between rules and different sub-topics like biochemistry and inorganic chemistry, with fun illustrations to clearly show what falls underneath each area. Dominic Walliman: YouTube | Flickr h/t: [Open Culture] Related Articles:

Conformal Projections <br /><table class="warning" summary=""><tr><td><h2 class="warning">JavaScript Is Not Available</h2><table summary=""><tr><td><img src="../../StockImg/warning36.png" alt=""></td><td>&nbsp;</td><td><em>Since JavaScript is disabled or not supported in your browser, some or all maps in this page will not be displayed.</em></td></tr></table></td></tr></table><br /> Introduction A hypothetical map projection faithfully reproducing all features of the original sphere would be perfectly equidistant, i.e., distances between every two points would keep the same ratio on both map and sphere; therefore, all shapes would also be preserved. On a flat map this property is simply not possible, as easily seen at points at the map's edge.

There's No Scientific Basis for Race—It's a Made-Up Label This story is part of The Race Issue, a special issue of National Geographic that explores how race defines, separates, and unites us. In the first half of the 19th century, one of America’s most prominent scientists was a doctor named Samuel Morton. Morton lived in Philadelphia, and he collected skulls. He wasn’t choosy about his suppliers. He accepted skulls scavenged from battlefields and snatched from catacombs. One of his most famous craniums belonged to an Irishman who’d been sent as a convict to Tasmania (and ultimately hanged for killing and eating other convicts).

The book that fights sexism with science When young men and women come up against sexist stereotypes masquerading as science, Angela Saini wants them to be armed with the facts. “I call my book ammunition,” she says of her 288-page prize-winning work Inferior: The True Power of Women and the Science that Shows It. “There are people out there who insist that somehow the inequalities we see in society are not just because of historic discrimination, but also because of biology – the idea that there are factors within us that will cause men or women to be better at some things than others.” She wrote Inferior to demonstrate that “actually, science doesn’t support that point of view. I think it’s important we understand these scientific facts. We need that ammunition to counter the weird mistruths that are circulating within and outside science about sex difference”.

Map of most hated foods in America click 2x Courtesy of Hater The INSIDER Summary: Dating app Hater used data from its users to create a map that shows the most hated food in each state.Some results make total sense; others are weirdly specific.For example, Missouri hates the last bite of a hot dog, New Jersey hates gas station wine, and Tennessee hates foraged food. Back in July, the dating app Hater created a map that revealed what everyone hates the most in each state. Unsurprisingly, things like Times Square, polo shirts, and workout couples were among the hilarious and often weirdly specific results. Now, the dating app is back with another map that shows the most hated food in each state.

Climate change will displace millions Wildfires tearing across Southern California have forced thousands of residents to evacuate from their homes. Even more people fled ahead of the hurricanes that slammed into Texas and Florida earlier this year, jamming highways and filling hotels. A viral social media post showed a flight-radar picture of people trying to escape Florida and posed a provocative question: What if the adjoining states were countries and didn’t grant escaping migrants refuge? By the middle of this century, experts estimate that climate change is likely to displace between 150 and 300 million people. Taking Notes By Hand May Be Better Than Digitally, Researchers Say Laptops are common in lecture halls worldwide. Students hear a lecture at the Johann Wolfang Goethe-University on Oct. 13, 2014, in Frankfurt am Main, Germany. Thomas Lohnes/Getty Images hide caption toggle caption Thomas Lohnes/Getty Images Laptops are common in lecture halls worldwide.

Peters Projection Map, Widely used in educational and business circles Maps not only represent the world, they shape the way we see it. The revolutionary Peters Projection map presents countries in their true proportion to one another: it has been adopted by the UN, aid agencies, schools and businesses around the world. The Peters World Map is an Equal Area cylindrical projection with standard parallels at 45 degrees thus resulting in a distortion of shape which is stretched about the equator and squashed towards the poles, but having the great advantage that all countries are correct in size in relation to each other. Widely used in educational and business circles as an icon of the modern concept of world equality. Five thousand years of human history have brought us to the threshold of a new age. It is an age typified by science and technology, by the end of colonial domination, and by a growing awareness of the interdependence of all nations and all peoples.

Climate change: 'Hothouse Earth' risks even if CO2 emissions slashed Image copyright Getty Images It may sound like the title of a low budget sci-fi movie, but for planetary scientists, "Hothouse Earth" is a deadly serious concept. Researchers believe we could soon cross a threshold leading to boiling hot temperatures and towering seas in the centuries to come. Equality Is Not Enough: What the Classroom Has Taught Me About Justice Imagine this situation: A classroom of students is settling down to work on a writing task. All of a sudden, one student exclaims, “That’s not fair! Why do they get to listen to the instructions on the headphones! I want to listen, too!” This happens way more often than you think. Not because teachers are inherently unfair creatures (I would know; I’m a teacher), but because students have come to understand “fairness” as simply equal treatment.