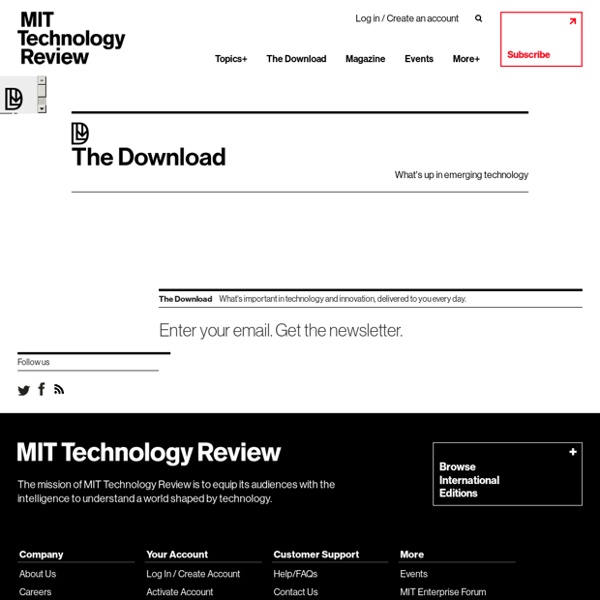 A new report claims that half of the world’s population may struggle to quench its thirst in the coming decades. The news: UNESCO’s new World Water Development Report says that 3.6 billion people currently live in places that can suffer from water scarcity for at least one month of the year. It projects that the figure will rise to five billion—half of the world’s predicted 10 billion population—by 2050. The problem: More and more demands are being placed on the water cycle by industry, agriculture, and a growing population. At the same time, climate change is exacerbating the problem by causing extreme drought and floods, often making arid regions even drier—and we're not doing enough to solve that problem. The solution: Might not be entirely technologocial. Image credit: Jeremy Brooks | Flickr

Sheriffs who cheered Trump's attack on press have their own media run-ins Donald Trump whipped up another rowdy ovation from a friendly crowd this week with an attack on the media, accusing journalists of being “very, very dishonest” and refusing to give him credit for his purported achievements. But rather than the usual sports stadium packed with partisans in red baseball caps, this tirade against the press was applauded by dozens of senior law enforcement officials in the splendour of the East Room of the White House. The episode unfolded on Wednesday afternoon, after the New York Times published an article by an unidentified senior Trump administration official who claimed to be one of many working to thwart Trump’s “worst inclinations” and frustrate his agenda. Some figures in law enforcement were dismayed by the sheriffs’ response to Trump’s remarks.

Moodle The long-awaited christening celebration for Edward would have marked a high point in the decadent feasts at Hampton Court Palace. But what would have been on the menu? Undoubtedly the feast which accompanied the christening was a monumental affair, however we actually know very little about what was served. What we do know is that this was a court which ate well and enjoyed food as a spectacle on a day-to-day basis, and so the menu for this momentous occasion must surely have been truly magnificent. We know meat rarely formed part of the average Tudor person’s diet, being expensive to procure and to roast. More acidic oceans 'will affect all sea life' Image copyright JAGO-TEAM/GEOMAR All sea life will be affected because carbon dioxide emissions from modern society are making the oceans more acidic, a major new report will say. The eight-year study from more than 250 scientists finds that infant sea creatures will be especially harmed. This means the number of baby cod growing to adulthood could fall to a quarter or even a 12th of today's numbers, the researchers suggest. The assessment comes from the BIOACID project, which is led from Germany. A brochure summarising the main outcomes will be presented to climate negotiators at their annual meeting, which this year is taking place in Bonn in November.

Hurricane Will Likely Cover North Carolina in Hog Feces, As Manure "Lagoons" at Factory Farms Overflow Smithfield’s hog farmers are scrambling to drain thousands of toxic manure lagoons, some the size of lakes, before they overflow into drinking water and the growing “dead zone” off the North Carolina coast A lake of pig feces and urine the size of 4 football fields outside a Smithfield facility in North Carolina. Image caught by spy drone in video below. Credit: Mark Devries One of the little discussed horrors of factory farming are manure lagoons — giant cesspools of chemically-treated, bacteria-laden, liquid feces — built to contain the massive amount of waste produced by the cows, pigs and chickens imprisoned in concentrated animal feeding operations, or CAFOs. As the nation’s top turkey producer, second largest pork producer, and third largest chicken producer, North Carolina’s factory farms produce more than 10 billion pounds — or 15,000 Olympic swimming pools’ worth — of wet animal waste per year.

Dormice, ostrich meat and fresh fish: the surprising foods eaten in ancient Rome - HistoryExtra We often think of the Mediterranean triad – bread, wine and olive oil – as the diet of most Romans, but in fact food in ancient Rome was much more diverse. And within each food type there was a range of goods suited to fit every financial budget: cheap local plonk or expensive Falernian wine from the Bay of Naples; home grown pot-herbs or exotic seasonings from India, and traditional salted pork or the coveted salted tuna from Spain. Consumption practices in ancient Rome, too, ranged from the traditional to the truly exotic. Conversely, another myth surrounding Roman food and eating practices claims the Romans held elaborate banquets where bears, smelly fish sauce and even dormice were eaten. The exaggeration and perpetuation of these stories is primarily due to the fact that the Romans themselves were, on occasion, both fascinated and disgusted by their own eating habits, and so wrote them down.

60 Environmental Rules on the Way Out Under Trump 1. Revoked Obama-era flood standards for federal infrastructure projects This Obama-era rule, revoked by Mr. Trump in August, required that federal agencies protect new infrastructure projects by building to higher flood standards. Building trade groups and many Republican lawmakers opposed it as costly and burdensome. 2. Time Bomb: How Atmos Energy’s natural gas keeps blowing up Texas homes After getting home from his overnight job, Domingo Mendez holds his infant son, Mateo. In the background, his wife, Juliana, prepares breakfast for their older son, Pablo, in their Dallas kitchen. Domingo, Juliana and Pablo were badly burned in 2011 when their home exploded after a gas leak. (Smiley N.

History of Spices - McCormick Science Institute Abundant anecdotal information documents the historical use of herbs and spices for their health benefits (1). Early documentation suggests that hunters and gatherers wrapped meat in the leaves of bushes, accidentally discovering that this process enhanced the taste of the meat, as did certain nuts, seeds, berries, and bark. Over the years, spices and herbs were used for medicinal purposes. Spices and herbs were also used as a way to mask unpleasant tastes and odors of food, and later, to keep food fresh (2). Weed killer Roundup increases risks of cancer by 40 percent, UW study finds SEATTLE – Exposure to chemicals in weed killer Roundup increases the risk of some cancers by more than 40 percent, according to a University of Washington study. Researchers found that the link between the most widely used herbicide glyphosate and developing Non-Hodgkin Lymphoma is stronger than previously reported. They examined studies between 2001 and 2018, finding that the risk of developing that type of cancer increases by 41 percent.

Trump prophecy and other Christian movements: 3 essential reads A new film, “Trump Prophecy,” will be shown in some limited theaters on Oct. 2 and 4. The film is an adaptation of a book, co-authored by Mark Taylor, a retired firefighter, who claimed he received a message from God in 2011 that the Trump presidency is divinely ordained. Liberty University film students are reported to have participated in the making of the film. Food in the Roman World The ancient Mediterranean diet revolved around four staples, which, even today, continue to dominate restaurant menus and kitchen tables: cereals, vegetables, olive oil and wine. Seafood, cheese, eggs, meat and many types of fruit were also available to those who could afford it. The Romans were also adept at processing and conserving their food using techniques from pickling to storage in honey. Flavouring food with sauces, herbs and exotic spices was another important element of Roman food preparation.