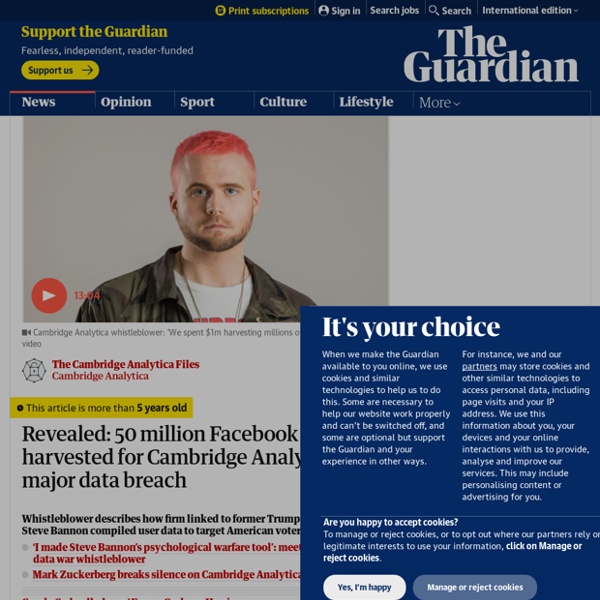 The data analytics firm that worked with Donald Trump’s election team and the winning Brexit campaign harvested millions of Facebook profiles of US voters, in one of the tech giant’s biggest ever data breaches, and used them to build a powerful software program to predict and influence choices at the ballot box. A whistleblower has revealed to the Observer how Cambridge Analytica – a company owned by the hedge fund billionaire Robert Mercer, and headed at the time by Trump’s key adviser Steve Bannon – used personal information taken without authorisation in early 2014 to build a system that could profile individual US voters, in order to target them with personalised political advertisements. Christopher Wylie, who worked with a Cambridge University academic to obtain the data, told the Observer: “We exploited Facebook to harvest millions of people’s profiles. And built models to exploit what we knew about them and target their inner demons. The revelations provoked widespread outrage.

12/4/18: Mueller about to have his say This week, Mueller is due to make three crucial court filings -- sentencing memos for Michael Flynn, Michael Cohen and Paul Manafort. Each document will tell us something important about what the future holds for these defendants and, more importantly, about what Mueller knows and where he might be headed. By the end of this week, we will know much more about the strength of Mueller's hand and the threat his investigation poses to President Donald Trump and his administration. Ever since his December 2017 guilty plea, Flynn has been something of a mystery man. Trump's former national security adviser, Flynn pleaded guilty to lying to the FBI about his contacts with Russian ambassador Sergey Kislyak.

Explainer: What is Cambridge Analytica? - RNZ Facebook's shares has lost billions of dollars in value after something to do with data used by Cambridge Analytica. Confused? Here's what it means, and what could come next. Photo: 123RF Cambridge Analytica is a London-based consulting firm. 3/21/17: Comey confirms FBI Is Investigating Trump’s Ties to Russia FBI Director James Comey also said the FBI has “no information” that supports Trump’s unsubstantiated claims that President Obama tapped Trump’s phones in Trump Tower during the election. James Comey: “With respect to the president’s tweets about alleged wiretapping directed at him by the prior administration, I have no information that supports those tweets, and we have looked carefully inside the FBI. The Department of Justice has asked me to share with you that the answer is the same for the Department of Justice and all its components: The department has no information that supports those tweets.” During the hearing, the director of the National Security Agency, Michael Rogers, also refuted President Trump’s claims that President Obama asked the British intelligence agency GCHQ to carry out the wiretap on Trump Tower. This is Rogers being questioned by California Democratic Congressmember Adam Schiff. Rep.

Bias already exists in search engine results, and it’s only going to get worse The internet might seem like a level playing field, but it isn’t. Safiya Umoja Noble came face to face with that fact one day when she used Google’s search engine to look for subjects her nieces might find interesting. She entered the term “black girls” and came back with pages dominated by pornography. Noble, a USC Annenberg communications professor, was horrified but not surprised. 12/8/18: Takeaways from the new Cohen & Manafort filings The court filings released Friday by Robert Mueller and federal prosecutors detail the alleged lies Donald Trump's former lawyer Michael Cohen and former campaign chairman Paul Manafort told both publicly and to the special counsel's investigators. And for the first time, prosecutors publicly endorsed Cohen's earlier statements in court that he acted at the direction of Trump when he committed two crimes in 2016: making payments to the two women alleging affairs with Trump in order to keep them silent. The court documents provide new insights into the Mueller probe itself, including why the proposed Trump Tower Moscow project was relevant to Russian election meddling and potential new contacts between Cohen and Russian officials seeking to arrange a meeting between Trump and Russian President Vladimir Putin. They reveal that a Russian national who claimed connections to the Russian government spoke with Cohen in 2015 and offered "political synergy" with the Trump campaign. Lying liars

Welcome to the Post-Text Future Your phone buzzes. A message, an Instagram post, a tweet — some bit of digital effluvia has come in, and it’s right there, promising a brief but necessary hit of connection. All you have to do is look. But, just as an experiment, how long can you resist looking? A minute? Two?

12/8/18: DJT: Please step away. Nothing to see here. "We're very happy with what we're reading because there was no collusion whatsoever," Trump told reporters Saturday at the White House before boarding Marine One for the Army-Navy game in Philadelphia. Trump told reporters he has not read the court filings, which detail alleged lies Cohen and Manafort told publicly and to investigators. In August, Cohen pleaded guilty to eight federal crimes after being charged by Manhattan federal prosecutors.

With artificial intelligence and automation, how many Kiwi jobs will go? - Noted The automation revolution Last week, a report by Infometrics From Education to Employment, estimated that the “automation revolution” would displace 31 per cent of jobs by 2036. That report wasn’t based on a new economic analysis, but on a review of previous reports, chiefly by PwC and NZIER and Chartered Accountants Australia and New Zealand.

1/15/17: Conway: Russian Hacking Investigation Should Be Kept Secret To 'Protect The Public' <a class="icopyright-article-tools-noscript" href=" target="_blank" title="Main menu of all reuse options"><img height="25" width="27" border="0" align="bottom" alt="[Reuse options]" src=" Click here for reuse options! </a> During part of a lengthy interview on this Sunday's Fox & Friends, incoming Trump propagandist in chief, Kellyanne Conway was asked whether or not her boss would like to fire FBI Director James Comey after he's sworn in later this week, and Conway told the crew on the curvy couch that she's very concerned that the American people are going to be harmed by all of these leaks.

Smartphones affecting New Zealanders' relationships - survey More than a third of New Zealanders are concerned their partners are spending too much time on their smartphone. Photo: 123RF A 2degrees survey showed 39 percent of 2200 respondents aged older than 16 believed the amount of time being spent on their smartphones was affecting the quality of their relationship. The survey also found more than half of New Zealanders choose their phone or computer if they have to deliver bad news, but 43 percent of respondents felt guilty about this. 11/16/17: Hicks may hold the keys to Mueller's Russia puzzle Special counsel Robert Mueller’s team is preparing to interview the woman who’s seen it all: Hope Hicks. She’s been part of Donald Trump’s inner circle for years, first at Trump Tower and then as an omnipresent gatekeeper and fixer who could get emails or other communications directly to the boss during the 2016 campaign. Story Continued Below

'We're told to be grateful we even have readers': pirated ebooks threaten the future of book series The bestselling American fantasy novelist Maggie Stiefvater is leading a chorus of writers warning readers that if they download pirated ebooks, then authors will not be able to continue writing because they will be unable to make a living. Stiefvater, author of the Shiver and Raven Cycle series, raised the issue after she was contacted on Twitter by a reader who told her: “I never bought ur books I read them online pirated.” On her website, Stiefvater later explained that, when ebook sales for the third book in the Raven Cycle – Blue Lily, Lily Blue – “dropped precipitously”, her publisher decided to cut the print run of the next book in the series to less than half of its predecessors.

The Perfect Weapon: How Russian Cyberpower Invaded the U.S. “I had no way of differentiating the call I just received from a prank call,” Mr. Tamene wrote in an internal memo, obtained by The New York Times, that detailed his contact with the F.B.I. It was the cryptic first sign of a cyberespionage and information-warfare campaign devised to disrupt the 2016 presidential election, the first such attempt by a foreign power in American history. What started as an information-gathering operation, intelligence officials believe, ultimately morphed into an effort to harm one candidate, Hillary Clinton, and tip the election to her opponent, Donald J.

Yes, Digital Literacy. But Which One? One of the problems I’ve had for a while with traditional digital literacy programs is that they tend to see digital literacy as a separable skill from domain knowledge. In the metaphor of most educators, there’s a set of digital or information literacy skills, which is sort of like the factory process. And there’s data, which is like raw material. You put the data through the critical literacy process and out comes useful information on the other side. You set up the infolit processes over a few days of instruction, and then you start running the raw material through the factory, for everything from newspaper articles on the deficit to studies on sickle cell anemia. Useful information, correctly weighted, comes out the other end.