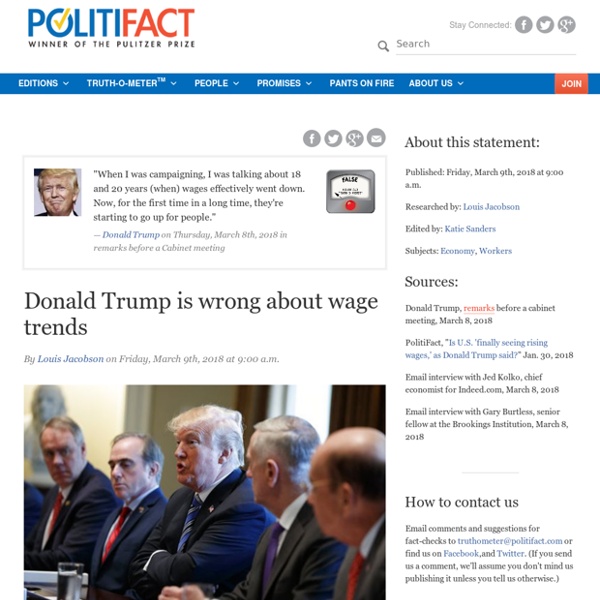 Before meeting with his Cabinet, President Donald Trump held court with the reporters assembled at the White House. Among other topics, Trump discussed some of the economic achievements on his watch: "Wages are rising at the fastest pace in more than a decade, something that people have been waiting for, as you know. When I was campaigning, I was talking about 18 and 20 years, and wages effectively went down. Now, for the first time in a long time, they're starting to go up for people." Previously, we rated a similar statement by Trump about rising wages "finally" coming "after years of wage stagnation" as Mostly False. Trump’s recent statement is more problematic. We looked at the data for what economists say is the best measurement — median usual weekly real earnings for full-time wage and salary workers, 16 years and over. This figure has been calculated quarterly since 1979. In July 1994, median inflation-adjusted wages stood at $314. Our ruling We rate the statement False.

Related:  Trumped Up • Fake vs Fact

Trump Org: a magnet for dirty businessmen By Inti Pacheco, Manuela Andreoni, Alex Mierjeski and Keenan Chen In late 1997, Donald Trump was beginning to bounce back from near financial ruin. Two years earlier, his financial losses had totaled $916 million following a string of bankruptcies at Trump casinos and other properties earlier in the decade, according to tax records published in late 2016.

Trump's got it all wrong about Amazon Amazon in the crosshairs of President Trump? Amazon stock sells off following report of President Trump's desire to 'go after' the company, targeting their tax treatment. Gary Kaltbaum and Hitha Herzog weigh in on 'Your World.' President Trump’s claim that Amazon is a tax scofflaw, subsidized by the U.S. Postal Service and an unfair threat to small businesses and malls, is absurdly wrong and dangerous. Amazon is an online platform that markets products for thousands of manufacturers and smaller merchants.

Truth, truthiness, triangulation: A news literacy toolkit for a “post-truth” world We were guaranteed a free press, We were not guaranteed a neutral or a true press. We can celebrate the journalistic freedom to publish without interference from the state. We can also celebrate our freedom to share multiple stories through multiple lenses. But it has always been up to the reader or viewer to make the reliability and credibility decisions. It is up to the reader or viewer to negotiate truth. News literacy is complicated. 'He talked about jobs': Trump comes out fighting – and touts ally in Roseanne Donald Trump grabbed the page with his right hand and showed it to the audience. “You know, this was going to be my remarks. It would have taken about two minutes but …” He tossed the sheet into the air then ducked as it came fluttering down, waving his hands with contempt. “That would have been a little boring,” he said with sly grin. “No, I’m reading off the first paragraph and I said, ‘This is boring.

No proof of Trump's conspiracy theory that millions voted many times In a speech in West Virginia that was billed as being about tax reform, President Donald Trump continued his refrain about widespread voter fraud by stating that millions of people vote multiple times. "In many places, like California, the same person votes many times," he said. "You probably heard about that. They always like to say 'oh that's a conspiracy theory.' Manufacturer Confirms Installing Remote-Access Software on U.S. Voting Machines CHANGING ITS STORY. Election hacking is at the top of everyone’s mind right now, thanks to the controversy surrounding the 2016 Presidential election. But a new report by Motherboard suggests the issue is far from new.