The Psychologist’s View of UX Design 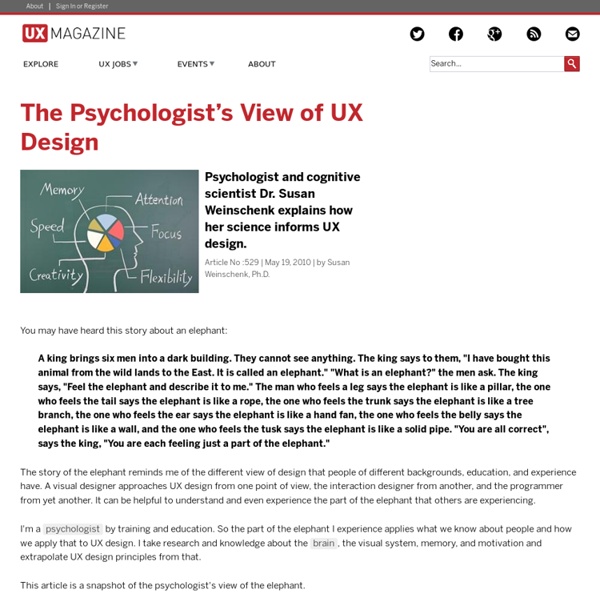 Realism in UI Design The history of the visual design of user interfaces can be described as a gradual change towards more realism. As computers have become faster, designers have added increasingly realistic details such as color, 3D effects, shadows, translucency, and even simple physics. Some of these changes have helped usability. In other areas, the improvements are questionable at best. Details and realism can distract from these concepts. The image on the left is a face of a specific person. At the same time, it’s obvious that some details are required. The circle on the left clearly shows a face. Let’s look at a symbol we actually see in user interfaces, the home button. The thing on the left is a house. The thing on the left is a home button. Let me explain this concept using an entirely unscientific graph: People are confused by symbols if they have too many or too few details. The button on the left is too realistic. The same applies to these toggles. An Exception Conclusion

COM : Technology I always think you should have some sort of philosophy when you design your software , this may not be a a opinion just related to UIs but i think it is important. I think it is very good if you have a simple concept that a user can understand. The ideal case is if the two first pages of your Documentation makes the user "get it" and everything after that is following that rule. Classics is of course the UNIX concept of "Everything is a file", Or in HTML everything is done by tags, and even if you have to most fancy HTML tool in the world it helps to know a bit about what a tag is and some basics of how to write HTML manually. It makes the user understand what the application does, and makes it more predictable. Don't ever try to hide the the basics of the software, even though the user will almost only use high level functions to do fancy things, He or She will sooner or later want to do something by hand, just to have total control and then the app should let them!

8 ways to reduce cognitive load: Part 2 In the previous part of the article I described 5 major design techniques that help to reduce cognitive load. This notion refers to the total amount of mental effort that is required from a user to complete a task. Increase of this phenomena above the level that is acceptable for user can cause serious usability issues such as: rise of bounce rateshallow visit depthlower conversion than expected to name a few. Yet, even if a service or product requires complex activity from a user, there are ways to make the design help people go through the process smooth and clear. 5. When people read on paper, eye movement create a Z-shaped path from left to right and diagonally down or right to left for Arabic or Japanese speakers. Do we read in a zig-zag pattern online to? How the awareness about this pattern can be used by designers to help users consume the content? 6. Are there any doubts what is the main CTA on this site? And just for the comparison… 7. 8. Reading list

Review: UX Archive Buttons, scrollbars, drop-down menus, borders, windows, rollers, cursors, and all sorts of other widgets are the playthings of UI designers. Buttons are for pushing, rollers are for rolling, and knobs are for turning. User experience deals with how these individual actions feel, but more importantly, a user’s overall experience on web or mobile. Essentially an archive of successful user flows, UX Archive shows a cycle of specific events through individual high-definition screen shots of each process. The chain of events shown on the site helps to clarify the architecture of the apps as well as exhibiting the general feel, with events split in to five different sections: exploring, onboarding, searching, sharing and sign up. The fact that the events are not combined—no single group of photos showing all five events together—actually makes the site more useful. At present there are only a handful of applications listed (and, as I mentioned, they are limited to those for iPhones).

How Google Unified Its Products With A Humble Index Card If you hadn’t noticed, every Google service has been trending toward a certain understated elegance. The company’s infamous era of championing 41 shades of blue is long over, as the company has learned to embrace clean lines, airy typography, and liberal white space across their platforms. But amidst implementing these long-established good design practices, Google rediscovered an old idea: index cards. Just like index and business cards of yore (or at least the late '90s), Google’s cards are plain, white rectangles peppered with nothing more than a little bit of type and maybe a photo. Are cards the epitome of flat modernism, or are they subconscious skeuomorphism? Even Google’s designers debated this point when I posed the question. We first saw cards returning results through Search’s Knowledge Graph, as Google began summarizing Wikipedia entries into condensed blurbs. Yes, Google is even developing cards on cards. Are Cards Good Design, Or A Foregone Conclusion?

The vital role of user research – Design at IBM To many people, conducting user research is a bit like cleaning up the garage: they know it would be a good thing to do and would bring some real benefits, yet somehow they never quite get round to it. For others, user research is something that does happen, but only occasionally, such as at the beginning of a big new project. Then there are those who do carry out some form of user research activity fairly frequently, but who tend to just use the one or two research methods that they have used previously. Obviously some user research is better than none. User research helps us to understand how people go about performing tasks and achieving goals that are important to them. Or, to put it another way, User research focuses on understanding user expectations, behaviors, needs, and motivations through methodical, investigative approaches. It helps us identify unarticulated needs and to fill in any gaps in our knowledge about our users, context of use, challenges, and opportunities.

Stop Explaining UX and Start Doing UX Both design communities I’ve been involved in (graphic design and user experience design) spend an inordinate amount of energy bemoaning the lack of respect designers get and how misunderstood our value is. Perhaps you’ve heard or even uttered statements like this: I always include user research in my proposals, but clients never want to pay for it. Nobody in our company understands what we do. They think we’re just here to build wireframes and make things look pretty. If I could convince management how important design is, they’d involve us earlier in the process and we could have more influence on the direction of the product. Not surprisingly, there is no shortage of articles and blog posts about how to communicate the value of UX. Many of us have been drawn into the “define the damn thing” debate. If only people understood us, we’d get the respect we deserve, right? The External Validation Model If we model this strategy, it looks something like this: The Internal Validation Model 1. 2.

Game design vs UX design Short form: UX design is about removing problems from the user. Game design is about giving problems to the user. In both cases you look at users’ cognitive reasoning and process capacity. And these days, we have UX designers on game teams, and they are incredibly valuable. Most UX designers don’t work in games. transparent, so that the user needs to think as little as possibleaffordant, so that the user knows what possibilities it offersscalable, so that it unfolds as the user develops skillsfeedback-rich, so that the user knows when they did somethingconstraining, so that the user can’t do things that get them in trouble What they do not do is actually specify the inner workings of whatever is being used. UX design in non-game applications is absolutely not about teaching the player how the guts of the software works. In general a game designer’s job is to create a great experience when playing a game. challenging. In addition, game designers In general, these lines get blurry.