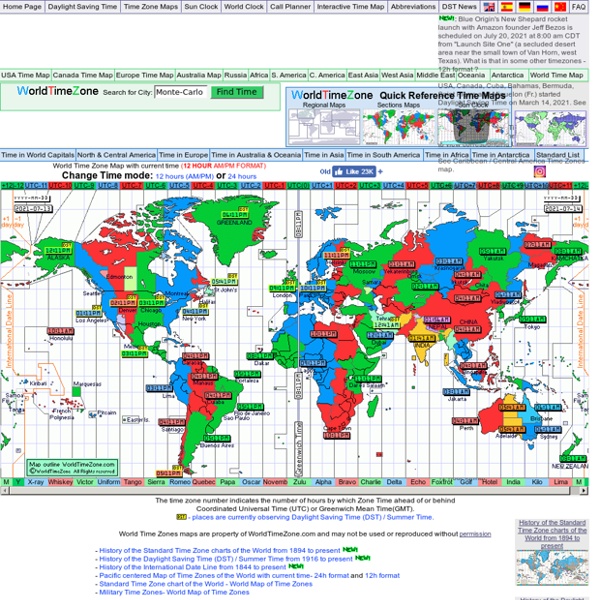 The Grand Tour: French Indochina The year is 1860 and you’re a French explorer and botanist, trekking through relentlessly hot and mosquito ridden jungle in northern Cambodia – a country you have found to be hopelessly undeveloped and unenlightened – when you come across a magnificent overgrown temple complex ‘grander than anything left to us by Greece or Rome’. Henri Mouhot’s ‘discovery’ of the temples of Angkor (in reality, the ruins were never really lost) is the stuff of boy’s adventure stories; 70 years later, a reconstruction of Angkor Wat would prove the highpoint of the predictably romantic Colonial Exhibition held in Paris, a celebration of France’s colonial conquests including its colonies and protectorates in French Indochina. French Indochina covered the region that today comprises Vietnam, Cambodia and Laos from 1887 until the French evacuation from Vietnam in 1954.

Time Zone Map DST – Click red dot for more info Legend: How to use the interactive Time Zone Map Search for any city in the search field above and place a black "pin" by that city on the map. If you place more than one pin, an extra line of information is added underneath the map with links to those cities' pages. You may add as many pins as you like. To remove the pins permanently (undo not possible), simply click here or on the Time Zone Map link in the menu above.Hover your mouse over any of the red dots to see the name of the city and country and current local time. untitled Jim Shockey and Alaska Tent & Tarp enter partnership. December 30, 2013 – Fairbanks Alaska. Alaska Tent & Tarp, manufacturer of the Arctic Oven tent, announced today a new multi-year partnership with professional hunter, Jim Shockey, and his company, Shockey Enterprises. The Arctic Oven tent is known worldwide as the premier extreme-environment camping tent, excelling in cold and wet climates.

See the Historic Maps Declassified by the CIA Shortly after the attacks of September 11, 2001, U.S. President George W. Bush and several advisors gathered at Camp David to weigh the country’s options. Kentucky Patriots - Starting Your Own Group How to start your own patriot group. So many folks whine about the lack of leadership. They keep looking ... and waiting ... for a leader to emerge.If you're one of those ... try looking in the mirror first. Ask yourself ... What can I do ?

History of the Lewis and Clark Expedition On May 21, 1804, Meriwether Lewis and William Clark left from St. Louis, Missouri with the Corps of Discovery and headed west in an effort to explore and document the new lands bought by the Louisiana Purchase. With only one death, the group reached the Pacific Ocean at Portland and then returned back to St. Sea Salt and Baking Soda Best All NaturalRemedy For Curing Radiation Exposure and Cancer If you have been exposed to any form of radiation, either for medical diagnostic purposes (fluoroscopy / mammography / other medical x-ray exams) or in the course of radiotherapy treatment, or if you are otherwise concerned by excessive radiation exposure, overload or poisoning (such as living near a nuclear reactor facility, working with diagnostic radiological equipment / in the nuclear processing industries / uranium mining / uranium or plutonium processing), or if you have been exposed to radioactive particles or higher ionizing radiation doses stemming from other sources such as depleted uranium (DU), testing of atomic weapons, frequent flights in higher altitudes, a nuclear disaster (radiation fallout from the Japan nuclear power plants) etc., If you are having any kind of radiation treatments, macrobiotic is the cure. Macrobiotics is very effective in curing radiation sickness and cancer. Exposure to radiation causes a cascade offree radicals that wreak havoc on the body.

Island Maps: Caribbean Islands, Greek Islands, Pacific Islands, Atlantic Islands & More - Worldatlas.com Arctic Ocean Atlantic Ocean (North) North of the equator Here’s How to Open a Can With Your Bare Hands There are still tin cans out there that don’t have the handy pop-top tab for you to pull, and thus, require a can opener. But what if you don’t have access to the specialized, can-opening kitchen tool? What then?

1846 - mrlincolnandfreedom.org Menu Preface by Lewis Lehrman Introduction by Richard Behn Credits An American History Project of Man Moves Huge Blocks By Himself Using Simple Tools & Ancient Knowledge Is this how Stonehenge and the pyramids were made? This Michigan man uses simple levers and stones to move massive blocks weighing as much as 21,000 pounds. Forgotten Technology Website: