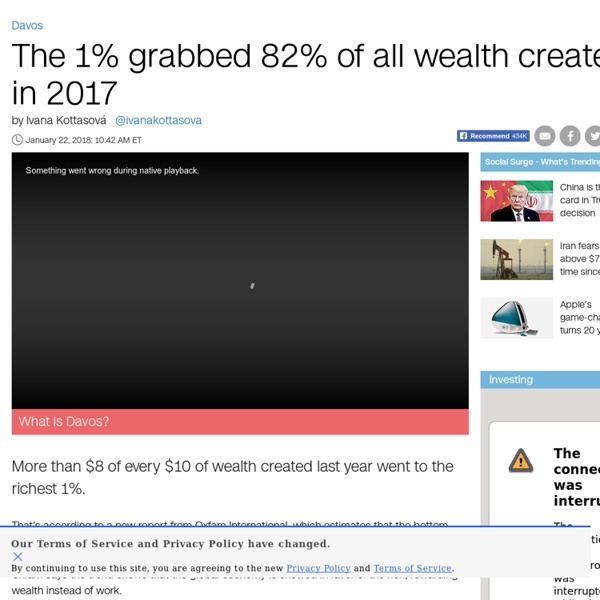 That's according to a new report from Oxfam International, which estimates that the bottom 50% of the world's population saw no increase in wealth. Oxfam says the trend shows that the global economy is skewed in favor of the rich, rewarding wealth instead of work. "The billionaire boom is not a sign of a thriving economy but a symptom of a failing economic system," said Winnie Byanyima, executive director of Oxfam International. The head of the advocacy group argued that the people who "make our clothes, assemble our phones and grow our food" are being exploited in order to enrich corporations and the super wealthy. The study, released ahead of the World Economic Forum in Davos, was produced using data from Credit Suisse's (CS) Global Wealth Databook. Related: 5 ways the world is pulling apart The report also highlights the detrimental effects of gender inequality with data that show more men own land, shares and other capital assets than women. Related: Thought 2017 was bad?

Deaf children losing out as English councils cut support, charity warns More than a third of councils in England are cutting educational support totalling £4m for deaf children, according to figures obtained by the National Deaf Children’s Society (NDCS). The figures, gained through freedom of information requests, show that councils in these areas are cutting 10% on average from deaf children’s services, which the charity warns are already near breaking point. In the last four years, one in 10 specialist teachers of the deaf have been cut, the charity claims. Meanwhile, deaf children are falling behind at every stage of school, and at GCSE two-thirds of deaf children fail to achieve a grade 5 in both English and maths – a key government target. The NDCS said it had received responses from 122 councils, of which 45 said they were making cuts between 2017-18 and 2018-19. The cuts come as councils across England struggle to meet growing demand for support for children with special needs.

Saudi Arabia accused of torturing female activists by electrocution and flogging leaving them unable to walk Campaigners have accused Saudi Arabia of subjecting several activists, including female human rights defenders, imprisoned since May to torture and sexual harassment. More than a dozen women’s rights activists have been detained for months, most of whom had campaigned for the right to drive and an end to the Kingdom’s male guardianship system, but some have since been freed. A group of UN experts last month called for the immediate release of six female human rights defenders they said were still being held incommunicado in Saudi Arabia. The arrests in May followed an earlier crackdown on clerics, intellectuals and activists in September 2017, in an apparent attempt to silence potential opponents of the country’s de facto ruler Crown Prince Mohammed bin Salman. The torture allegations come as Riyadh faces international outcry over the killing last month of dissident Saudi journalist Jamal Khashoggi in the Saudi consulate in Istanbul. Additional reporting by Reuters

Media Giant Sinclair Hired Reporter From Russian Propaganda Outlet RT Who Produced ‘Must-Run’ ‘Deep State’ Segment The United States' largest owner of television stations, Sinclair Broadcast Group, mandated that its outlets run a segment on the so-called deep state that was produced by a former reporter for the Russian propaganda outlet RT, according to a new report. The "must-run" piece aired on March 21 and featured Sebastian Gorka, the former adviser to President Donald Trump, lamenting the existence of a deep state—a popular conspiracy theory in some circles that longtime career public servants in the government are working to subvert the U.S. government. Trump has repeatedly complained about such a mysterious rogue network.

Our brains rapidly and automatically process opinions we agree with as if they are facts By Christian Jarrett In a post-truth world of alternative facts, there is understandable interest in the psychology behind why people are generally so wedded to their opinions and why it is so difficult to change minds. We already know a lot about the deliberate mental processes that people engage in to protect their world view, from seeking out confirmatory evidence (the “confirmation bias“) to questioning the methods used to marshal contradictory evidence (the scientific impotence excuse). NRA’s Ties to Russia and Alleged Spy Maria Butina Run Deep Despite Denials, Report Reveals For the first time since the National Rifle Association’s links to Russia became a matter of public interest, the gun advocacy organization released a statement about a trip high-ranking members of the group took to Moscow in 2015. The organization’s lawyers told The New York Times that the NRA’s chief executive had forbidden members of the association from joining the delegation that went to Russia, and noted that the NRA’s then-president Allan Cors had decided not to go on the trip. But despite attempts to minimize the involvement of its top officials, analysts say there is ample evidence that the organization had deeps ties to Russia and a longstanding relationship with Russian guns rights activist Maria Butina, who was recently charged for attempting to infiltrate Republican political circles on behalf of the Russian government.

Weedkiller found in granola and crackers, internal FDA emails show US government scientists have detected a weedkiller linked to cancer in an array of commonly consumed foods, emails obtained through a freedom of information request show. The Food and Drug Administration (FDA) has been testing food samples for residues of glyphosate, the active ingredient in hundreds of widely used herbicide products, for two years, but has not yet released any official results. But the internal documents obtained by the Guardian show the FDA has had trouble finding any food that does not carry traces of the pesticide. “I have brought wheat crackers, granola cereal and corn meal from home and there’s a fair amount in all of them,” FDA chemist Richard Thompson wrote to colleagues in an email last year regarding glyphosate.

A Russian 'troll slayer' went undercover at a troll factory Slaying online trolls can be a lonely business. Just ask Russia’s Lyudmila Savchuk, who first exposed the story of Russia’s disinformation campaign back in 2014. The journalist and 33-year-old mother of two, Savchuk started noticing websites and social media accounts attacking local opposition activists in her hometown of Saint Petersburg with a frequency she hadn’t seen before. The posts were all too similar. The verbal assaults too coordinated.