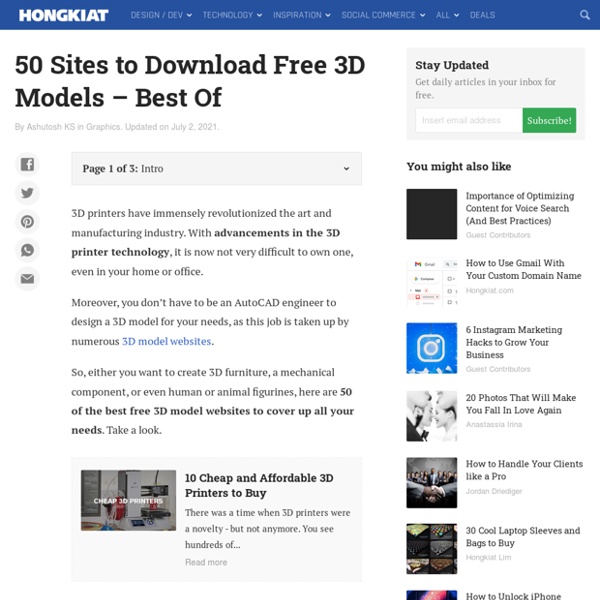 3D printers have immensely revolutionized the art and manufacturing industry. With advancements in the 3D printer technology, it is now not very difficult to own one, even in your home or office. Moreover, you don’t have to be an AutoCAD engineer to design a 3D model for your needs, as this job is taken up by numerous 3D model websites. So, either you want to create 3D furniture, a mechanical component, or even human or animal figurines, here are 50 of the best free 3D model websites to cover up all your needs. Take a look. 10 Cheap and Affordable 3D Printers to Buy 10 Cheap and Affordable 3D Printers to Buy There was a time when 3D printers were a novelty - but not anymore. Pikbest Pikbest offers thousands of 3D models that are presented under various categories like decoration, wedding, appliances, bathroom, kitchen, furniture. GrabCAD GrabCAD Community Library offers 2.8+ million designs and models including CADs, thanks to its largest community of designers, engineers, and students. Cults

10 Tips for Designing Presentations That Don’t Suck: Pt.1 Powerpoint has produced more bad design in its day that perhaps any other digital tool in history with the possible exception of Microsoft paint. In this post we’re going to address the epidemic of bad presentation design with ten super practical tips for designer better looking and more professional presentations. Along the way we’ll see a number of awesome slide designs from Note & Point along with some custom examples built by yours truly. Let’s get started! 3 Tricks to Optimize STL Designs for 3D Printing 3D modeling for printing can be hard-work, especially when one does not know all the tricks of the modeling software and cannot put them in application to ensure a shorter printing time of the model. There is the general belief that a high-detailed model in printable file format, with accurate and clean-printed outer shell, must take a lot of time to design, weigh much and print forever and a day. However, this is not the case.

Credit card-sized Raspberry Pi computer gets a video cam! Just when you thought you can no longer squeeze anything else into the tiny Raspberry Pi computer, think again: the puny device is getting a video camera. A report on PC World said developers expect to make the HD camera available by early spring, though the camera's specifications have yet to be finalized. "The first cameras are expected to come with a 15-centimeter (just under 6 inches) flat cable and sell for around $25. The lens on the camera is similar to those found on many camera phones and is expected to provide 5 megapixels," PC World said. It quoted Raspberry Pi developers as saying the camera board is an alternative to using USB cameras with the Raspberry Pi. They said a camera board may give a better-quality resolution at a lower price, compared to USB-based counterparts.

Free Online Game Creator By kylemawer This free downloadable game creator let’s you make your very own flash games. If you’ve ever fancied turning your hand to making a simple flash game or perhaps you’re looking for a summer course project to run with learners then Stencyl could be just the program for you. It’s free, online, simple to download and use and it’s available for either a PC or a Mac. The program comes with a few examples to try out and customize. They are pictured here on the left.

15 truly useful things you can 3D print for your home Feb 19, 2016 | By Tess, Kira We’ve said time and again that desktop 3D printers are for much more than just making cheap plastic tchotchkes and trinkets. Beyond the ornaments, the paperweights, and the 3D printed coasters are tons of truly useful 3D printed household goods that could make your daily life easier than you’ve ever imagined, often while being cheaper or more practical than comparable store-bought products. Don't know where to start? We’ve compiled a list of some of the most practical, useful, and ingeniously simple 3D printed objects that you can make at home for your home, regardless of your 3D printing skill level. 7 Most Notorious Computer Hacker Groups of All Time With the recent attack on PlayStation Network and a bunch of high-profile websites, computer hackers are back in the limelight again. Hackers and hacker groups were quite famous in the 80’s and 90’s but their popularity started fading since the Y2K days. Today, we are once again witnessing hackers threatening to take on giant corporations sending chills down everyone's spine.

Platonic Solids and Plato's Theory of Everything The idea that all the constituents of nature consist of mixtures of a small number of "elements", and in particular the selection of the four elements of earth, water, air, and fire, is attributed to an earlier Greek philosopher Empedocles of Agrigentum (495-435 BC). Empedocles believed that although these elements (which he called "the roots of all things") could be mixed together in various proportions, the elements themselves were inviolable, and could never be changed. In contrast, one of the intriguing aspects of Plato's theory was that he believed it was possible for the subatomic particles to split up and re-combine into other kinds of atoms. For example, he believed that a corpuscle of liquid, consisting of 120 "type 1" triangles, could be broken up into five corpuscles of plasma, or into two corpuscles of gas and one of plasma.

Top 20 Biggest 3D Printers in 2016 Feb 10, 2016 | By Kira We know that bigger doesn’t always mean better, but when it comes to 3D printing, the ever-growing list of absolutely massive, large size 3D printing ventures is hard to ignore. That’s why we’ve put together a list of the top 20 biggest 3D printers right now, and the various large-format 3D printing projects they are capable of. Though you’d need a pretty powerful microscope to see the tiniest color picture ever 3D printed (small enough to fit inside a human hair), there’s no way you could miss the giant 3D printed airplane parts, 3D printed furniture, 3D printed cars and yes, even 3D printed buildings coming out of these colossal 3D printers.

How To Become A Hacker Copyright © 2001 Eric S. Raymond As editor of the Jargon File and author of a few other well-known documents of similar nature, I often get email requests from enthusiastic network newbies asking (in effect) "how can I learn to be a wizardly hacker?". Back in 1996 I noticed that there didn't seem to be any other FAQs or web documents that addressed this vital question, so I started this one.