Closing the attainment gap in Scottish education. Key points The gap between children from low-income and high-income households starts early. 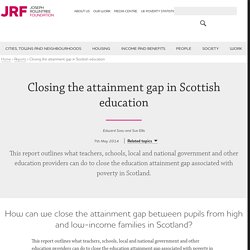 By age 5, it is 10–13 months. Lower attainment in literacy and numeracy is linked to deprivation throughout primary school. By age 12–14 (S2), pupils from better-off areas are more than twice as likely as those from the most deprived areas to do well in numeracy. Attainment at 16 (the end of S4) has risen overall, but a significant and persistent gap remains between groups. The researchers conclude that: advice about developing the curriculum, improving educational outcomes for all pupils and inspecting schools should explicitly provide guidance on reducing the link between poverty and attainment; lack of data, research and evaluation evidence for schools and local authorities currently hampers progress.

The Scottish education community needs a national evidence base of what works and professional development in how to use evidence. Background. ClosingtheAttainmentGapinScottishEducation. Briefing33. Domielli anti oppressive practice. Inequality income social problems full. Mpse summary 0. Dp the broken society and reflections on antiwelfarism 010611 en. Inequalities. Scotland's attainment gap: three ways to bridge the educational divide. The UK has one of the most socially segregated school systems in the developed world, with academic selection – where children are admitted to a school on the basis of ability – and parental choice at its core. 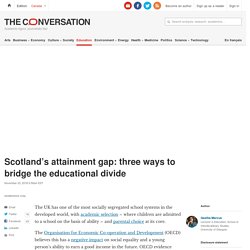 The Organisation for Economic Co-operation and Development (OECD) believes this has a negative impact on social equality and a young person’s ability to earn a good income in the future. OECD evidence shows that segregated schools present children with two different perspectives of the world and affect their life chances. Effects of poverty There is a strong link between a pupil’s socioeconomic status and how well they do in school. Pupils from disadvantaged backgrounds have a higher chance of failing. In Scotland, it is estimated that one in four children is living in poverty. Following the Finns Finland is widely recognised as being an educational success story. Why children under five are twice as likely to die in the UK as in Sweden. Revealed: health prospects of children in care look worse than for anyone else.

When the state gets involved in the welfare of children or young people under 18, we call them “looked after”. 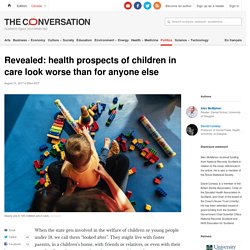 They might live with foster parents, in a children’s home, with friends or relatives, or even with their own family under a compulsory home supervision order. Nearly 95,000 British youngsters live in such arrangements, which is not far off one in 100. We know that their life chances are not as good as they should be. A child's chances of being taken into care depend on where they live in the UK. A child growing up in the UK is much less likely to be doing so in care if they live in Northern Ireland rather than England, Scotland or Wales. 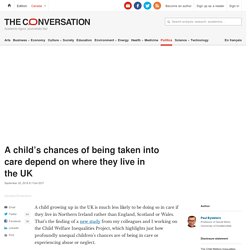 That’s the finding of a new study from my colleagues and I working on the Child Welfare Inequalities Project, which highlights just how profoundly unequal children’s chances are of being in care or experiencing abuse or neglect. Our research set out to identify inequalities in children’s chances of being on a child protection plan or register – essentially a confirmed case of abuse or neglect – or of being in care, or what’s called a looked after child. We analysed data for about 36,000 children in contact with child protection services in 55 local authorities or trusts in 2015 and examined the minutiae of what happened in eight of them.

The four UK countries of England, Northern Ireland, Scotland and Wales create a kind of natural experiment in children’s social care with differing legal systems, structures and political leadership. Global inequality is on the rise – but at vastly different rates across the world. Inequality is rising almost everywhere across the world – that’s the clear finding of the first ever World Inequality Report.

In particular, it has grown fastest in Russia, India and China – places where this was long suspected but there was little accurate data to paint a reliable picture. Until now, it was actually very difficult to compare inequality in different regions of the world because of sparse or inconsistent data, which lacked credibility. But, attempting to overcome this gap, the new World Inequality Report is built on data collection work carried out by more than a hundred researchers located across every continent and contributing to the World Wealth and Income Database.

Inequality in Scotland: despite Nordic aspirations, things are not improving. When it comes to social policy, Scottish politicians have tended to look across the North Sea, rather than the Atlantic, for inspiration. 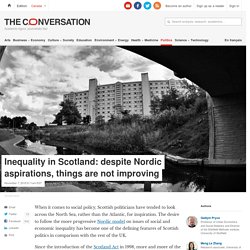 The desire to follow the more progressive Nordic model on issues of social and economic inequality has become one of the defining features of Scottish politics in comparison with the rest of the UK. Since the introduction of the Scotland Act in 1998, more and more of the powers needed to achieve this “idyll” have been devolved from Westminster to Holyrood, enabling the Scottish parliament to take a different course to its southern neighbour. Given that 2018 is the 20th anniversary of the Scotland Act, it is a timely moment to take stock. How has Scotland fared in its aspiration to reduce inequality?