Tips on Learning to Talk 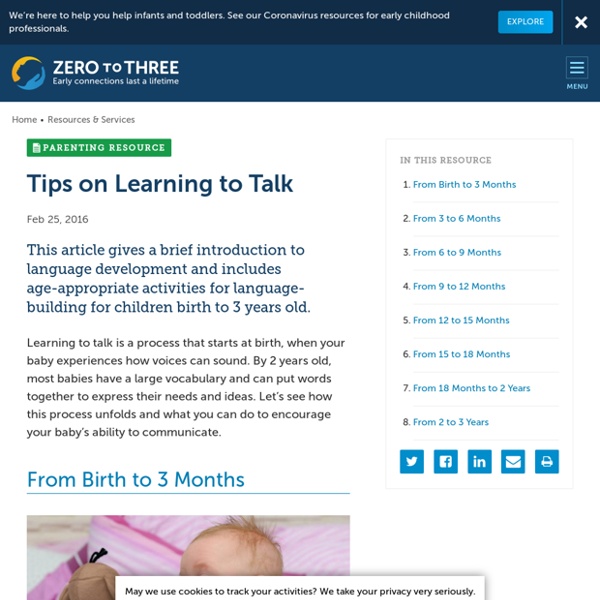 Learning to talk is a process that starts at birth, when your baby experiences how voices can sound. By 2 years old, most babies have a large vocabulary and can put words together to express their needs and ideas. Let’s see how this process unfolds and what you can do to encourage your baby’s ability to communicate. From Birth to 3 Months Your baby listens to your voice. He coos and gurgles and tries to make the same sounds you make. Sing to your baby. From 3 to 6 Months Your baby is learning how people talk to each other. Hold your baby close so he will look in your eyes.Talk to him and smile.When your baby babbles, imitate the sounds.If he tries to make the same sound you do, say the word again. From 6 to 9 Months Your baby will play with sounds. Play games like Peek-a-Boo or Pat-a-Cake. From 9 to 12 Months Your baby will begin to understand simple words. From 12 to 15 Months Babies begin to use words. Talk about the things you use, like “cup,” “juice,” “doll.” From 15 to 18 Months

A few more myths about speakers of multiple languages Does multilingualism cause language delays and identity problems? The British Council's Nayr Ibrahim busts a few more myths about speakers of multiple languages. Myth: Multilingualism causes language delay Raising children bilingually is sometimes believed to cause language delay. This misconception is based on a separate underlying proficiency (SUP) hypothesis. This theory, now discredited, suggests that languages are stored in separate compartments or containers, which represent half the capacity of the monolingual brain. Read Early and Often Why Read to Babies? Reading together when babies are as young as 4 months old increases the chances that parents continue reading to babies as they get older. Beginning early is important because the roots of language are developing in a baby’s brain even before he can talk!

Let's Talk What do babies need in order to learn and thrive? One thing they need is conversation — responsive, back-and-forth communication with their parents and caregivers. This interactive engagement is like food for their developing brains, nurturing language acquisition, early literacy, school readiness, and social and emotional well-being. KQED Public Media for Northern CA There was a direct correlation between the children who’d heard a lot of parent talk and how prepared they were to learn once they arrived at school. Hart and Risley wrote, “With few exceptions, the more parents talked to their children, the faster the children’s vocabularies [grew] and the higher the children’s IQ test scores at age 3 and later.” For Suskind, a lightbulb went on. “The truth is, much of what you see in children born into poverty is analogous to children born deaf,” Suskind said. “It’s a really important point. The most fundamental science shows that it’s really language, and all that comes with it, the brain-building aspect of things, that makes a difference.”

Does being bilingual make you smarter? Language teacher and researcher Miguel Angel Muñoz explains the latest research on how being bilingual affects your brain, ahead of a British Council seminar in Cardiff on whether learning a foreign language makes you smarter. You can watch the live-streamed seminar on Tuesday, 3 June. More than half the world's population uses two or more languages every day It is hard to estimate the exact number of bilingual people in the world, as there is a lack of reliable statistics .

Free Online Books for Kids in English and Multi Language There are numerous benefits of reading, and every child deserves the gift of a good book. With this list of free online books for kids in English and various other languages, children can read books online free anytime they like. Whether you are lacking books at home for your child’s age group, or you have a home library full of books but your child is bored with those they have, free online books for kids are always accessible if you know where to find them. There is a huge range of books on line for free that you can utilise. Here are a few sites where you can find them. Sound Words: Examples of Onomatopoeia Onomatopoeia is a fun, linguistic tool used in literature, songs and advertisements. Now that you've seen examples of the individual words, consider the following examples of onomatopoeia words in use. Take a look at the different onomatopoeia examples in Todd Rundgren's song, appropriately named Onomatopoeia.

How can young children best learn languages? The British Council's Tracey Chapelton explains how parents of young children can lay the foundations for success. Children's brains are highly active Your child is unique, but what all children have in common is natural curiosity and an innate ability to learn. Kuhl states that babies and young children are geniuses at acquiring a second language.