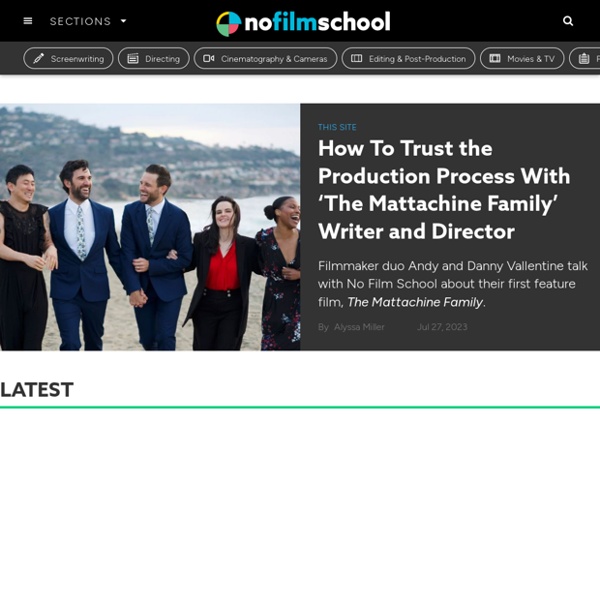 Get 100+ Real Light Leak & Lens Flare Overlays in Full HD from RodyPolis If your film work consists of a lot of wedding, music, or experimental videos, you probably include a good amount of stylistic light leaks and lens flares to add a little more panache to match the emotional nature of your material. However, if you or your clients are like the Chotchkie’s Manager from Office Space and want just a little more flair, RodyPolis has a collection of over 100 HD leaks and flare overlays called Lens FX Prism that are not only organic, but reasonably priced. Okay, so you can definitely find a bunch of great overlays online, be they flares, leaks, grains, or whatever. However, many times you get what you pay for (flat, poorly designed — essentially overlays that look like overlays).

Gosheven: 'I have very apocalyptic visions of the world' - Shape Gosheven is the solo project of Bálint Szabó, member of the improvisation trio 12z and curator at Trafó House in Budapest. Leaper is his first solo venture, released in May 2017 on Opal Tapes. He put to use the several years he spent studying different tuning systems for electric guitar. He’s developed a unique electric guitar with strings that can be placed in a stereo field to further enrich the already unusual sounds of the retuned instrument, inspired by some of the greatest American minimalists, such as La Monte Young and Terry Riley, and Italian Renaissance composers (“Unbalanced Holiness” is based on a composition by the great Giovanni Maria Trabaci).

How to Finance Your Short Film Q: What is the format of a webinar? A: Stage 32 Next Level Webinars are typically 90-minute broadcasts that take place online using a designated software program from Stage 32. Q: Do I have to be located in a specific location?A: No, you can participate from the comfort of your own home using your personal computer! If you attend a live online webinar, you will be able to communicate directly with your instructor during the webinar.

A Cheap & Easy Way to Create a Professional-Looking Infinite Black Backdrop Here's a cheap, simple, and professional-looking technique to add to your arsenal -- the infinite black background. Because its visuals add a level of surrealism and style, we've seen this used in music videos, dream sequences in narrative films, art films, you name it -- and chances are if you're not wondering how to pull it off, it's because your curiosity has already led you to find the answer. Filmmaker Lewis McGregor shares his insight into how to create this effect inexpensively and simply by using black material, three lights, and editing software.

18 top stock photo libraries Are you struggling to find images to complete your latest project? If so, these great photo libraries could be the solution to all your problems. iStock offers millions of affordable, unique, royalty free images and stock photos. A Long List of the Best Short Film Festivals Around the World Screening at a short film festival is a sure-fire way to start creating a buzz around your film and your career. You are also likely to bump into short-film buyers eager for content for the dozens of fledgling websites desperate for movies. Short films are much easier to see on the web or on a mobile telephone than features (at the moment, at least) How to Light & Shoot a Seamless White Background from Start to Finish A seamless background can make your project look like a million bucks, but lighting one can be a little tricky if you don't know where to start. Zach Arias offers up this lighting tutorial on DEDPXL to show you how to light for a seamless white, black, grey (virtually any color, really) background. If you're a stickler for details like me, one thing you'll appreciate is the utter thoroughness of the lesson. Arias breaks down not only the hows, but the whys behind every creative and technical decision he makes on his set.

Initial thoughts on the Canon EOS C100 Edit: Philip here. Just arrived in Helsinki and reading the specs, but one thing jumps out at me like a flasher in the bushes…there appears to be no slow motion feature at all! Not even 720p. Surely this is an omission in the specs. I will check it out and report back. If they have done this,it’s a huge mistake. Reviews of Powell and Pressburger works Reviews of Powell and Pressburger works The reviews have been divided into the following sections: The Masters - Michael Powell & Emeric Pressburger The Films - Listed by year then alphabetically The People - Actors, Actresses, crew Miscellaneous - Everything else Some articles may deal with more than one person or film, where this happens we have tried to cross reference them. The Masters: Emeric Pressburger Master Storyteller Michael Powell the man himself The Films: (Any reviews are liable to contain spoilers) The People: Note: I have only included the people that I have articles about. There were many more people involved in the making of these films.

National Film Board of Canada Who We Are The National Film Board of Canada is the nation’s public producer and distributor of distinctive and audacious audiovisual content. Our mandate is to engage Canadians and the world through the production of creative and innovative works that reflect our country and Canadian points of view. 3 Isn't a Crowd, but You Can Make It Look Like It Is with These Cinematography Tricks What do wild parties, college lectures, massive armies, and zombie hordes have in common? If you're a filmmaker, they all require a ton of extras. But not everyone has a big enough budget or network to acquire them, which can be pretty stressful considering that at some point in your filmmaking journey, you're going to want/need to shoot a scene that requires a crowd. That's why it's crucial for every indie filmmaker to learn how to trick your audience into thinking that your five roommates (god help you) are actually a throng of wasted co-eds thrashing to EDM -- or whatever your scene calls for. This video from our buddies at Film Riot offers some techniques on how to do this both in-camera with clever blocking and camera settings, as well as in post by compositing multiple shots of the same extras. That technique is great if you want to show your crowd in an extreme wide shot, but you're eventually going to have to get in close.