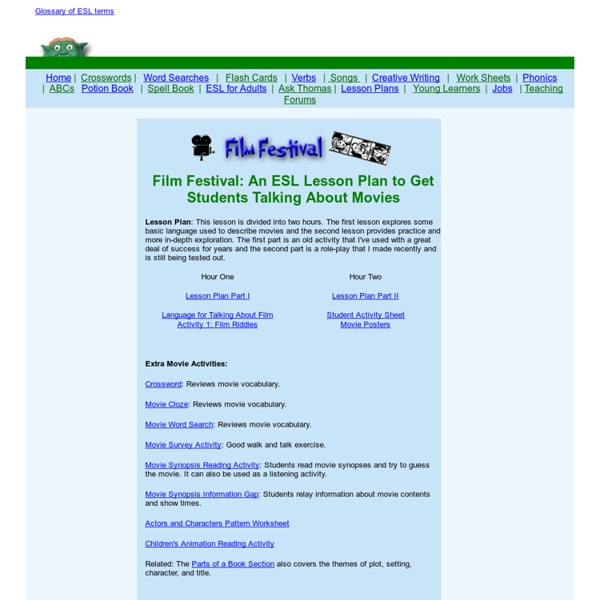 English Conversation – Movies This is the preparation material for an English Conversation lesson about movies. There are some common terms and idioms that we use when discussing movies and a list of conversation questions that people might ask eachother when talking about this subject. Audio discussion about movies Listen to discussion about movies Transcript of audio discussion Vocabulary we might use when talking about movies Writing English Drama Scripts in ESL Class English learners need to use their English in productive settings to improve their communicative skills. One of the most fun ways to do this is by working on collaborative projects. Students work together towards some tangible goal such as a business presentation, creating a power point slide or by performing a short work for each other. This lesson plan focuses on helping students write a short script, practice the dialogue and perform for fellow students. Having students perform a short drama script that they've developed combines a number of production skills through working in groups. Some of the territory covered includes:

Resources for teachers and students Teaching packs, teaching guides and resources to support the use of moving image media in schools and other learning environments. New film education guide for schools 21st Century Literacy, a 3-year Strategy to recognise the value of film in education, has produced this essential guide for schools who want to deliver film activities in and out of the classroom. Using Film in Schools: A Practical Guide will help teachers and headteachers integrate filmmaking, watching and critical analysis across the curriculum. Screenonline 29 Incredibly Useful Websites You Wish You Knew Earlier There are so many wonderful websites around, and it is difficult to know each and every one of them. The below list provides some of those websites that I find particularly helpful, even though they are not as famous or as prevalent as some of the big names out there. 1. BugMeNot Are you bugged constantly to sign up for websites, even though you do not wish to share your email? If yes, then BugMeNot is for you.

Effective Classroom Movie Lesson Plan Ideas If you are unable to show an entire film because of time or school guidelines, you may want to show scenes or clips. You may also want to use the closed caption feature during a film because the combination of reading with film can reinforce student understanding, especially if the film is an adaptation of a play (Shakespeare) or novel (Pride and Prejudice). The following list gives ideas for how you can effectively use films to reinforce what is being taught. mfiles - film music history, an overview of the development of music for film The history of music as an accompaniment to visual entertainment is surely a long one. Without going back to antiquity, there is all manner of theatre (musical or non-musical), variety shows and various forms of opera. In all of these forms of theatre, music can adopt a range of roles: sometimes it is an intrinsic part of the entertainment (a collection of songs or a musical), and sometimes it is providing an accompaniment to other visual or verbal forms of entertainment. As an accompaniment music can simply "be there" (in the background), but often the music is chosen with a particular purpose of enhancing the spectacle in some way (creating atmosphere) or in a more sophisticated way to create or enhance an emotional reaction among members of the audience (see the article What is Music?). This spectrum of musical involvement in the entertainment also applies to film. Growth of a new industry - the early years of film music

Advanced Level Listening: How to Spot a Liar I noticed that some of you would like more realistic listening practice, so here's another Ted lecture for you to test your listening skills! How are your listening skills? Listening to long English lecture style listenings are an important ability. Students on our university preparation programmes practise listening to lectures, because in American universities, lectures are the main way of teaching. It's a difficult task to listen and take notes for future reference at the same time. This skill is also important if you need to listen to business presentations in English.