How many verb tenses are there in English? - Anna Ananichuk 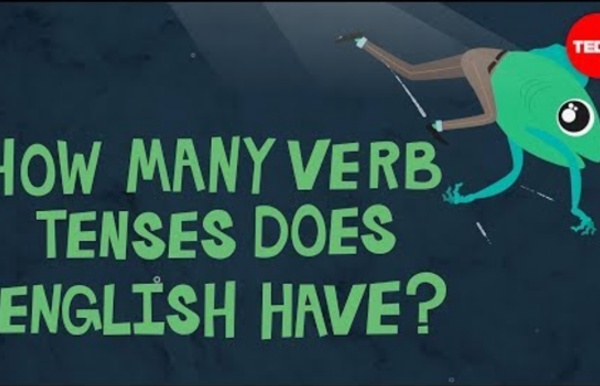 Telling the Time Updated February 2022 - let me know if there are any problems. You can set this page as a homework task for a group of students; doing so will give you a record of who has completed the task. Visit the teacher's section for more information. You can share this page by using the link below. This is a mini-game to learn and practice telling the time in English. The first screen shows an analog clock displaying a time - initially 9 o'clock - and a pane below showing the matching time phrase. On the second screen there is a mini-game. While playing the game, a cat is displayed in the bottom left of the screen, with a bridge infront of her. The target language is time phrases, specifically: Half past, quarter past, quarter to, five past/to, ten past/to, twenty past/to, twenty-five past/to. These were chosen as they are the main phrases used to tell the time. This game is made with Javascript with the CreateJS framework.

On learning languages and the gaining of wisdom - Language on the Move The National Institute of the English Language in Tehran has used the slogan “A new language is a new life” for more than 50 years I’m preparing my lecture on “Internationalization and Multilingualism” for a language teaching conference in Bangkok later this week and I’ve been looking for a pithy proverb or quote about the joys of language learning. I’ve discovered more than I can possibly use and so am sharing some below. The idea that learning a new language extends your horizons, makes you wiser and allows you to live your life more fully can be found in a number of intellectual traditions. This idea is based on the fact that each language is related to a particular cultural and intellectual tradition and a particular world view. Die Grenzen meiner Sprache bedeuten die Grenzen meiner Welt. Obviously, one way to extend the limits of one language is to learn another one. Notitia linguarum est prima porta sapientiae. A Chinese proverb makes the same point: 学一门语言，就是多一个观察世界的窗户。

Ruth's story: One child refugee's journey from Eritrea to England - CBBC Newsround Ruth was 14 when she left her home country of Eritrea in east Africa. She didn't like the way she was being treated, so she embarked on a dangerous journey to the UK. Ruth has been telling Newsround's Hayley her story... Three-thousand children Three-thousand children arrived in the UK alone last year. Many of them are migrants or refugees escaping war or devastation in their home countries. When they get to the UK they are often tired and afraid. They are taken by immigration officers or police to a safe place where they are asked lots of questions. This is so that the people in charge can understand how old the child is, where they have come from and what they will need to keep them healthy and safe. Leave to remain If the child is under 17, they are given leave to remain, which means they can stay in the UK and will be looked after until they are old enough to look after themselves. I have spoken to 12 children. One of them was Ruth. Living in Eritrea But this was no easy task. Leaving Eritrea

Use six different tenses in English | Games to learn English Students often learn just one piece of grammar in a lesson. Most of them master that day’s subject and move on to the next. But, when the time for revision comes, they often don’t remember what they’ve learnt. For example, two weeks ago my class encountered an exercise in which several tenses were revised. First, they demanded that I re-explain the grammar and then they seemed really confused about what form they should use. ADVERT: That was why I decided to stop there and prepare several exercises and a clear mind map. The second infographic is much more detailed. Now that your students understand the grammar, they have to use it as soon as possible. If you cannot do the exercise online, you can try the following paper version of the quiz. six tenses worksheet You can find more exercises to practise different tenses at Five Tenses and Five Tenses additional exercises.

Harry Potter at Home: Readings Harry Potter at Home* brings the magic of the Harry Potter books to children, parents and carers in lockdown. Now, some of the best-loved faces in entertainment, music and sport have lent their voices to the story they love by recording videos of themselves reading Harry Potter and the Philosopher’s Stone. All seventeen chapters of the book will be released between now and the middle of the summer. Videos will be posted weekly on harrypotterathome.com, with an audio-only version available for free on Spotify. On this page, you can buy different editions of the book, download magical activities, test your Philosopher's Stone knowledge, and receive a certificate once you’ve completed the readalong! *The Harry Potter At Home project is an initiative by Wizarding World Digital and J.K.

theconversation A new study on second language learning has recently taken the media by storm. A range of headlines – from the BBC to the Daily Mail and The Guardian – all trumpeted the depressing message that it’s impossible to become fluent in a foreign language after around age ten. All of these reports dramatically misrepresented the findings from the study, and the message they sent is flat-out wrong. For one thing, the words “fluency” or “fluent” never even appear in the original study, published in the journal Cognition. There’s a good reason for this: fluency is not what the study’s authors, or any other scientists studying the effect of age in foreign language learning, are interested in. To be fluent in another language means that you can communicate with relative ease, that is, without it being a real strain on either the speaker or the listener. Pretty much anyone can become fluent in pretty much any language at pretty much any age. The ‘critical window’ No cut off at age ten

Does Speaking A Foreign Language Change Your Personality? My high school English teacher used to tell us stuff like, “Learning a foreign language changes you forever.” Despite being an obvious attempt to make us passionate about her subject, her words made sense to me — the kid who quoted obscure Buffy the Vampire Slayer lines and treated Alanis Morissette’s lyrics like the word of God. After all, without a basic understanding of the English language I couldn’t have done any of that, and all those beautiful imaginary friendships would have never blossomed. Then I made it to adulthood (I think) and experienced first-hand the perks of speaking a foreign language: hitting on exotic men (whilst still using Buffy references as pick up lines #ForeverAlone) and weaseling my way into more office gossip than ever before. Split of the online self Learning English strongly affected my habits, but was I really profoundly changed by it? Blogging is where the signs of this metamorphosis first showed. The persistent vegetative state of the party

Past Continuous Tense vs. Past Simple: Mysterious Stalker (ESL Video) Synopsis of English / ESL Video Watch the suspense thriller short about Elissa and the mysterious stalker & present the past continuous tense vs. past simple to students in a pre-intermediate level lesson. Title of English / ESL Video Elissa and the Mysterious Stalker Target English Grammar Past Continuous Tense vs. Student Proficiency Level Pre-intermediate level grammar Suggested Courses General English. Instructions – Play the video in class after delivering a warm-up activity first. – Pause the video whenever the narrator asks students a question to give students time to answer. Summary of English Grammar: Past Continuous Tense vs. Approximate chronological order: Storyline: – Starts at 0:00. English Grammar Rules and Explanations: Function: – To talk about an action still in progress in the past. Timeline: – Someone was chasing her. – Someone started chasing her in the past, but we don’t know when. – That person stopped chasing her some time in the past. Specific Uses: Simple Past: Form: Statements: