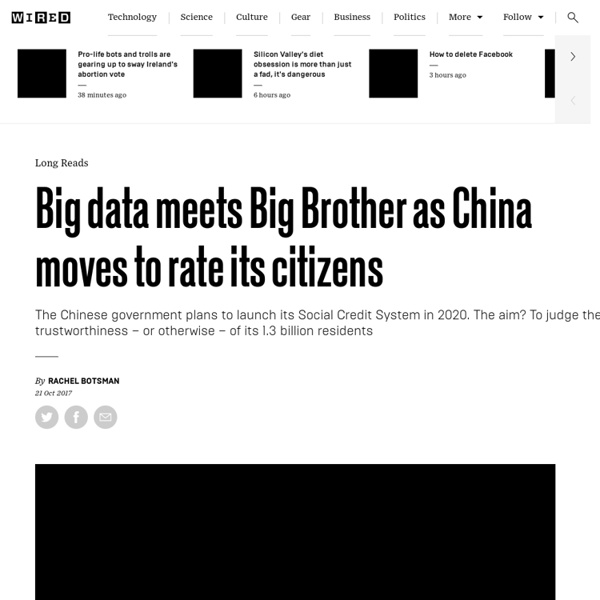 On June 14, 2014, the State Council of China published an ominous-sounding document called "Planning Outline for the Construction of a Social Credit System". In the way of Chinese policy documents, it was a lengthy and rather dry affair, but it contained a radical idea. What if there was a national trust score that rated the kind of citizen you were? Imagine a world where many of your daily activities were constantly monitored and evaluated: what you buy at the shops and online; where you are at any given time; who your friends are and how you interact with them; how many hours you spend watching content or playing video games; and what bills and taxes you pay (or not). It's not hard to picture, because most of that already happens, thanks to all those data-collecting behemoths like Google, Facebook and Instagram or health-tracking apps such as Fitbit. A futuristic vision of Big Brother out of control? China's new viral app could be straight out of Black Mirror Kevin Hong

5 data mining methods - The Daily Universe Editor’s note: This story pairs with “Data mining: how it works, why it’s important” There are many methods of data collection and data mining. Here are some of the most common forms of data mining and how they work: 1. Anomaly detection Anomaly detection can be used to determine when something is noticeably different from the regular pattern. Slaughterbots: They Cannot Be Stopped (WATCH) [SM] The Future of Life Institute (an AI watchdog organization that has made a name for itself through its campaign to stop killer robots) released a nightmarish short film imagining a future where smart drones kill. The short is called ‘Slaughterbots,’ and it channels the near-future dystopias depicted in Black Mirror in an attempt to raise awareness about the dangers of autonomous weapons. According to disclose: You can’t actually stop autonomous weapons.

World's Leading Physicist Says Quantum Computers Are "Tools of Destruction, Not Creation" Weapon of Mass Disruption Quantum Computers are heralded as the next step in the evolution of data processing. The future of this technology promises us a tool that can outperform any conventional system, handling more data and at faster speeds than even the most powerful of today’s supercomputers. However, at the present juncture, much of the science dedicated to this field is still focused on the technology’s ultimate utilization.

The 7 Most Important Data Mining Techniques Data mining is the process of looking at large banks of information to generate new information. Intuitively, you might think that data “mining” refers to the extraction of new data, but this isn’t the case; instead, data mining is about extrapolating patterns and new knowledge from the data you’ve already collected. Relying on techniques and technologies from the intersection of database management, statistics, and machine learning, specialists in data mining have dedicated their careers to better understanding how to process and draw conclusions from vast amounts of information. But what are the techniques they use to make this happen? Explicit cookie consent MOST lovers of Chinese martial arts take the magical aspects of kung fu, as demonstrated by the flying fighters of legend and film, with a pinch of salt. But Wei Lei built his career in China on a claim that his mastery of tai chi, a branch of kung fu, had given him supernatural power. In a programme about kung fu that was broadcast on state television in 2015, Mr Wei demonstrated that he could keep a dove standing on his hand with an invisible force-field and smash the inside of a watermelon without damaging its rind. The broadcaster itself appeared to be among the credulous. There were many sceptics, too. Earlier this year one of them stepped forward to challenge Mr Wei: Xu Xiaodong, a practitioner of mixed martial arts—a fighting form drawing on Eastern and Western traditions that began to take off in America in the 1990s (and is picking up fans in China).

'Our minds can be hijacked': the tech insiders who fear a smartphone dystopia Justin Rosenstein had tweaked his laptop’s operating system to block Reddit, banned himself from Snapchat, which he compares to heroin, and imposed limits on his use of Facebook. But even that wasn’t enough. In August, the 34-year-old tech executive took a more radical step to restrict his use of social media and other addictive technologies. Rosenstein purchased a new iPhone and instructed his assistant to set up a parental-control feature to prevent him from downloading any apps. He was particularly aware of the allure of Facebook “likes”, which he describes as “bright dings of pseudo-pleasure” that can be as hollow as they are seductive.

Northern white rhino: Last male Sudan dies in Kenya Media playback is unsupported on your device The world's last surviving male northern white rhino has died after months of poor health, his carers say. Sudan, who was 45, lived at the Ol Pejeta Conservancy in Kenya. 17 Data Science Applications & Examples You Should Know Data scientists tackle questions about the future. They start with big data, characterized by the three V’s: volume, variety and velocity. Then, they use it as fodder for algorithms and models. This Is What It’s Like To Not Own A Smartphone In 2018 It’s 2018, and I’ve never owned a smartphone. Four years ago, I wrote about having no regrets for being a “dumb phone” user. At the time I was an anomaly: 58% of Americans, according to Pew researchers, owned a smartphone; that figure was around 80% for people in my age demographic. Now, I’m a clear oddity: 77% of U.S. adults are smartphone users, as are around 90% of my peers. But, oh well. I don’t plan on changing tack anytime soon.

Bring Deep Learning Algorithms To Your Security Cameras AI is quickly revolutionizing the security camera industry. Several manufacturers sell cameras which use deep learning to detect cars, people, and other events. These smart cameras are generally expensive though, compared to their “dumb” counterparts. [Martin] was able to bring these detection features to a standard camera with a Raspberry Pi, and a bit of ingenuity. [Martin’s] goal was to capture events of interest, such as a person on screen, or a car in the driveway.

The story behind the UK's coronavirus symptom tracker app The story of Britain’s most successful Covid-19 app – yes, there is such a thing – started with twins. Tim Spector, a professor of genetic epidemiology at King’s College London, has been probing and observing identical twins for a long time – and in Just 1992 he launched the registry TwinsUK to aid research on the subject. His interest was investigating how people with identical genes could grow up to develop radically different traits and illnesses. Take nutrition: identical twins might eat the same food, but react very differently – maybe one will develop an allergy while the other won’t; or their blood sugar level would draw dissimilar curves, with different repercussions on each sibling’s metabolism. After decades spent researching twins at King’s College, in 2018 Spector teamed up with technologists Jonathan Wolf and George Hadjigeorgiou to launch a startup called ZOE. Then the coronavirus outbreak started.