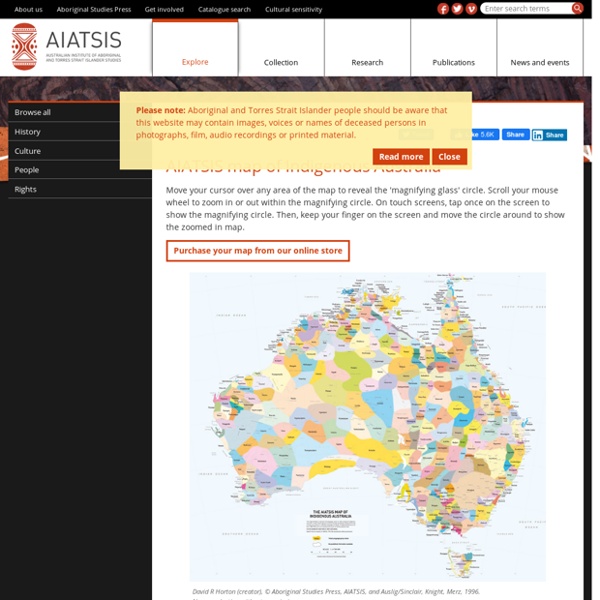 Move your cursor over any area of the map to reveal the 'magnifying glass' circle. Scroll your mouse wheel to zoom in or out within the magnifying circle. On touch screens, tap once on the screen to show the magnifying circle. Then, keep your finger on the screen and move the circle around to show the zoomed in map. Purchase your map from our online store For thousands of years, the original inhabitants of Australia, Aboriginal and Torres Strait Islander peoples occupied the lands with very different boundaries than today, centred on intimate cultural relationships with the land and sea. “It’s my fathers land, my grandfather’s land, my grandmothers land. The map is an attempt to represent all the language, tribal or nation groups of the Indigenous peoples of Australia. The map was developed along with the Encyclopedia of Aboriginal Australia as part of a research project. "What was before Lord Vestey born and I born? Limitations of the map Further information

Indigenous Australian Languages Celebrating 2019 International Year of Indigenous Languages Strong cultural identity enables one to feel proud of themselves, and speaking and maintaining ones language raises self-esteem and enables one to feel good about themselves. Traditional language is important for maintaining strong cultural connections. Where traditional languages have been taken away from communities, a sense of loss, grief and inadequacy develops. To keep communities and generations strong, traditional language being passed from one generation to another is vital. Brooke Joy, descendant of Boandik people from the Mount Gambier region in South Australia (Community, identity, wellbeing: The report of the Second National Indigenous Languages Survey, 2014)

Mary Ann Bugg, the Aboriginal bushranger erased from Australian folklore Updated about 5 hours agoMon 18 Nov 2019, 6:47am Mary Ann Bugg doesn't fit the stereotype of a 19th-century woman. Often dressed in men's clothes, she was an expert horse rider and skilled bush navigator who roamed with her partner across NSW as he robbed travellers, stations, pubs and stores while eluding police. Most history books mention her as the partner of the infamous Captain Thunderbolt, the "gentleman bushranger" famed for escaping from jail on Cockatoo Island — but Mary Ann has every claim to being just as iconic. Mary Ann was a proud Worimi woman, born of an Indigenous mother and convict father near Gloucester on the mid-north coast of NSW. In 1860 she met Thunderbolt, whose real name was Fred Ward.

Australians Together Kinship is at the heart of Indigenous society. A person’s position in the kinship system establishes their relationship to others and to the universe, prescribing their responsibilities towards other people, the land and natural resources. Traditional kinship structures remain important in many Indigenous communities today.[1] There are over 500 Indigenous nations across Australia.

On 'Carpentaria', by Alexis Wright - Griffith Review I FIRST READ the fiction of Alexis Wright when I was writing a thesis on transgenerational trauma for my doctorate at Western Sydney University. I was exploring the ways in which literature testifies to transmissions of psychic trauma, which, in Unclaimed Experience (Johns Hopkins University Press, 1996), Cathy Caruth defines as the impact of an unassimilated event or experience that makes its presence known belatedly and often illogically. In Carpentaria, Wright’s second novel, I found a prime example of such testimony: a fierce epic that both honours Indigenous sovereignty and culture and attests to the ravages wrought by colonisation. Set in the fictional coastal town of Desperance, on the Gulf of Carpentaria in north-west Queensland, the novel centres on the infighting between local Aboriginal communities, and the greater challenge that befalls the region when a multinational mining corporation sets up on sacred land. References Wright, A 1997, The Grog War, Magabala Books, Broome.

National Museum of Australia Aboriginal occupation Aboriginal people are known to have occupied mainland Australia for at least 65,000 years. It is widely accepted that this predates the human settlement of Europe and the Americas. Stories From The Dreaming The news that BHP will “destroy at least 40 Aboriginal sites, up to 15,000 years old” is a modern-day tragedy. Stories will be lost with the destruction of these sites. Each site, whether it contains ancient artwork or remains for the archaeologist to piece together, could hold dozens of stories. Let’s talk about the artwork first An Aboriginal elder once proudly said to me: “Our painting carries the spirituality of who we are.” “How so?”

Aboriginal people and place - Barani Aboriginal woman in a canoe (nawi) fishing with a line, c1805 (Mitchell Library, State Library of NSW - PXB 513) Author: Anita Heiss and Melodie-Jane Gibson The Council of the City of Sydney acknowledges Aboriginal and Torres Strait Islander peoples as the traditional custodians of our land – Australia.