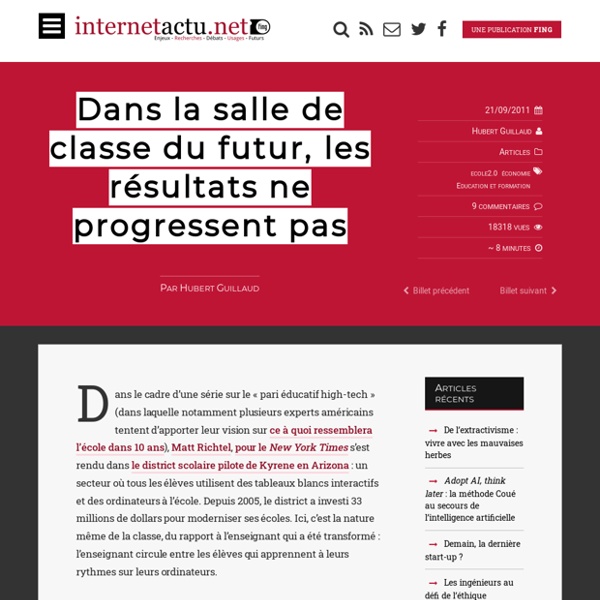 ePedagogy Introduction Despite an increased interest in the use of e-learning to enhance students’ learning, it is surprising that so little research has been conducted to justify these claims. Goodyear (2001GoodyearP (2001) Psychological foundations of networked learningin: C. Jones & C. Steeples (Eds)Networked learning: perspectives and issues(Godalming, Springer) [Google Scholar]) concluded: ‘the literature on learning in higher education is surprisingly quiet with respect to what both lay people and practitioners might expect to be a key construct—that of “understanding” ’ (p. 62). Matt Richtel - Bits Blog Thor Swift for The New York TimesClifford I. Nass, a professor of communication at Stanford University, in 2000. Clifford I. Nass, a professor of communication at Stanford University who died over the weekend, did pioneering work on multitasking and its impact on behavior and the brain. Read more… Danny Moloshok/Associated PressWerner Herzog's new documentary explores the consequences of texting while driving, and is sponsored by the major mobile phone companies.

What can computers teach that textbooks and paper can't? September 06, 2011 What can computers teach that textbooks and paper can’t? On Sunday, Matt Richtel publishing a terrific piece in the New York Times lamenting how schools are blowing billions on high-tech gewgaws, despite little evidence showing it helps learning. Richtel unearths lots of grisly facts: Study after study has found that many popular tech initiatives — such as one-to-one laptops, interactive whiteboards, and “clickers” — don’t necessarily correlate with higher test scores, and sometimes they correlate with lower ones. This hasn’t stopped schools from blowing tons of dough: The Arizona district of Kyrene has spent $33 million in tech since 2005, yet scores have “stagnated” even as those across the state have, overall, risen. Amazingly, Kyrene is nonetheless asking voters to approve another $46.3 million for school technology over the next five years.

Bloom, Kolb s.a 1. Introduction Information and Communication Technology (ICT) applications, in particular with the education system, might change the future of the underdeveloped world, eliminating the digital divide from the education system both locally and in the international arena [1]. However, there are some challenges that the developing world faces in trying to adopt ICT to the education sector. These challenges relate to: limitation of funds, Internet access, lack of trained staff, hesitation to change to new technologies and policy inadequacy. Richtel’s Rearview Mirror Misses the Mark Email Share September 5, 2011 - by Tom Vander Ark 0 Email Share Matt Richtel wrote the rearview mirror story of the last decade—technology layered on top of how we’ve always done school yielding meager results at least when measured in traditional ways. The story of this decade is that personal digital learning will change the world. The Sunday feature in the NYTimes did a disservice to the field.

untitled Photo by Steve Wheeler No, this is not some new discovery about the evolutionary development of snakes - nor is it a reptile dysfunction... If you can please the Head when all about you Are losing hope and blaming it on you, Stagnant Future, Stagnant Tests: Pointed Response to NY Times "Grading the Digital School" Matt Richtel's panoramic essay, "In Classroom of the Future, Stagnant Scores." weighs in this morning by "Grading the Digital School." I found myself cheering and jeering alternately throughout this piece. Why? Because it so quickly confuses "standards" with "standardized test scores" and technology put into classrooms with "preparing kids for a digital future (actually, the digital present: it's here, it's now, like it or not).

5 Pedagogical Techniques for eLearning success When implementing eLearning into your organization it is imperative to draw upon your Subject Matter Expert’s (SME) vast body of knowledge in order create more institutionally effective and highly relevant training content. Using your SME’s background however is not enough to build great eLearning. Knowing different pedagogical techniques to build effective courses is imperative to having successful learning both in a face-to-face environment as well as an online environment. Making sure your instructional design teams are experts in learning theories and strategies is critical to effective learning.