Helen Pearson: Lessons from the longest study on human development 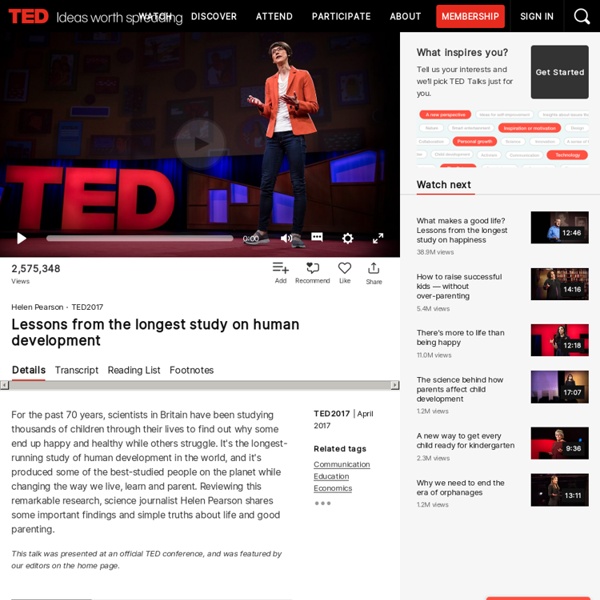 edutopia “Why did you cheat in high school?” I posed the question to a dozen former students. “I wanted good grades and I didn’t want to work,” said Sonya, who graduates from college in June. [The students’ names in this article have been changed to protect their privacy.] My current students were less candid than Sonya. Jerusalem syndrome The best known, although not the most prevalent, manifestation of Jerusalem syndrome is the phenomenon whereby a person who seems previously balanced and devoid of any signs of psychopathology becomes psychotic after arriving in Jerusalem.[citation needed] The psychosis is characterised by an intense religious theme and typically resolves to full recovery after a few weeks or after being removed from the area. The religious focus of Jerusalem syndrome distinguishes it from other phenomena, such as Stendhal syndrome in Florence or Paris syndrome for Japanese tourists. In a 2000 article in the British Journal of Psychiatry, Bar-El et al. claim to have identified and described a specific syndrome which emerges in tourists with no previous psychiatric history.[1] However, this claim has been disputed by M. Kalian and E. Witztum.[2][3] Kalian and Witztum stressed that nearly all of the tourists who demonstrated the described behaviours were mentally ill prior to their arrival in Jerusalem.

The Impact of Cell Phones on Student Attention in the Classroom Many studies have investigated the so-called “downstream” effect of cell phone presence on learning. Students who split their attention between a learning task and texting on their cell phones or accessing Facebook, for example, perform poorly when compared to students who are not dividing their attention. But recent research from the Journal of the Association for Consumer Research suggests that cell phones might have a negative “upstream” impact on learning, too. The authors propose that the mere presence of a cell phone, even when it is silenced and stored out of sight, might be undermining our ability to focus.

How the smartphone affected an entire generation of kids As someone who researches generational differences, I find one of the most frequent questions I’m asked is “What generation am I in?” If you were born before 1980, that’s a relatively easy question to answer: the Silent Generation was born between 1925 and 1945; baby boomers were born between 1946 and 1964; Gen X followed (born between 1965 and 1979). Next come millennials, born after 1980.

Sweden officially the 'goodest' country in the world, study says Sweden has topped a poll as the best ‒ or “goodest” ‒ country when it comes to serving the interests of its people while avoiding damaging impacts to other nations and the environment. The country has outranked 162 others to take pole position in the Good Country Index, a league table based on 35 separate indicators from sources including the United Nations and the World Bank. Sweden scores highest for positive lifestyle contributions including prosperity, equality, health and wellbeing, while also performing well culturally. We’ll tell you what’s true. You can form your own view. From 15p €0.18 $0.18 USD 0.27 a day, more exclusives, analysis and extras.

Mind molding psychedelic drugs could treat depression, and other mental illnesses My research group has been studying the effects of psychedelics on neuronal structure and function, and we found that these compounds cause neurons to grow. A lot. Many of these compounds are well-known and include lysergic acid diethylamide (LSD), psilocin (from magic mushrooms), N,N-dimethyltryptamine (DMT, from ayahuasca) and 3,4-methylenedioxymethamphetamine (MDMA, aka ecstasy). These are among the most powerful drugs known to affect brain function, and our research shows that they can alter the structure of the brain as well. Changes in neuronal structure are important because they can impact how the brain is wired, and consequently, how we feel, think and behave. Prior to our study, there were relatively few compounds known to have such drastic and rapid effects on neuronal structure.

This school scans classrooms every 30 seconds through facial recognition technology A high school in China has made a facial recognition technology system that scans the student’s behavior in the classroom. The facial recognition technology introduced in the school is recording facial expressions of all students while they are in their classrooms. The system scans the classroom every 30 seconds and recognizes seven different expressions such as neutral, happy, sad, disappointed, scared, angry and surprised. The system is called as“Intelligent Classroom Behavior Management System” and it is being used at Hangzhou No. 11 High School. With scanning facial expressions the system has the ability to even analysis six types of behaviors by the students such as standing up, reading, writing, hand raising, listening to the teacher, and leaning on the desk. The information regarding how the students are reacting and behaving in the class when a teacher teaches is later sent to teachers to more efficiently analyze the behavior of students.

Why predicting suicide is a difficult and complex challenge Who is going to die by suicide? This terrible mystery of human behavior takes on particular poignance in the wake of suicides by high-profile and much-beloved celebrities Kate Spade and Anthony Bourdain. It is only natural that people want to know why such tragedies occur. Those closest to those who take their lives are often tormented, wondering if there is something they could have – or should have – known to prevent their loved one’s suicide. The age of the tragic selfie Image copyright AP When daily life resumes at a scene of death and destruction it's usually a hopeful sign. At the Erawan shrine in Bangkok, the site of Thailand's most deadly bomb attack, it didn't take long for Hindu worshippers to return - and with them came other people taking selfies.

4 simple exercises to strengthen attention and reduce distractibility Mengxin Li “I think, therefore I am distracted.” If Descartes were writing today, this is what his famous aphorism might have become. Xiuhtezcatl Martinez Explains Why He's Fighting Climate Change In this op-ed, Xiuhtezcatl Martinez, a Colorado-based 17-year-old youth director of Earth Guardians, explains why protecting the earth is the responsibility of young people. Xiuhtezcatl is of indigenous descent and has sued the government, including a recent lawsuit in Colorado arguing that the state should require state oil and gas regulators to consider public health and the environment, and is one of many young people involved in an ongoing lawsuit against the government for failing to protect people from the effects of climate change. In addition, Xiuhtezcatl is a hip-hop artist and has toured the nation and other countries around the world to perform his music. My dad taught me that protecting the earth is a responsibility, the same way our ancestors had the responsibility to do so. Those were the teachings I grew up with. My mom was very involved in environmental activism, and I’ve been working my whole life with the Earth Guardians.

Arenas and zoos can be overwhelming for children with autism Jared Oriel Like many kids his age, six-year-old Abram Maha was fascinated by mummies. So one summer day in 2014, his parents, physicians Julian Maha and Michele Kong, took him to one of his favorite places: the mummy exhibit at a museum in their hometown of Birmingham, Alabama. 5 Inspiring TED Talks To Transform Your English Class - The Teaching Cove It’s no secret that TED talks are all the rage in the English classroom. So, why write a teaching tips post about them if everyone uses them anyway? Well, I really believe that it’s not just about turning on Youtube or TED and letting your students listen.

Tantalized by Train Wreck Reality Television Glitz, snits, and ditsy-ness make for high drama and even higher ratings, but are these the real reasons people tune into reality shows like Toddlers & Tiaras and Here Comes Honey Boo Boo? These programs regularly attract millions of viewers but the oft-asked question is why. Query any viewer and most will tell you they are both repulsed and fascinated at the same time; they simply can’t turn away. Just like a freeway car accident or train wreck, we rubberneck toward disaster. But why are we so attracted to television shows that seem to exploit and reward outrageous behavior?