How to choose your news - Damon Brown 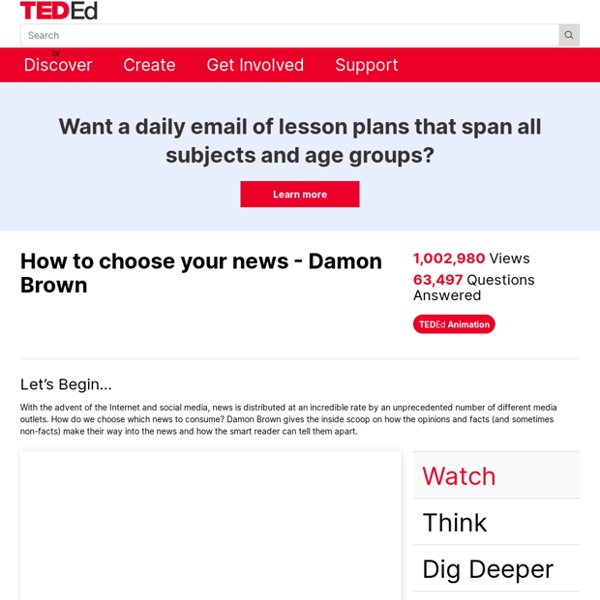 How the media landscape has changed Media visionary Clay Shirky gave a TED Talk on how the media landscape has changed. “The moment we’re living through, the moment our historical generation is living through, is the largest increase in expressive capability in human history.” In other words, the amount of information we are capable of capturing is unprecedented. As a result, we need new techniques to filter through the information and need to work much harder than previous generation to better understand our world. Watch Clay Shirky’s fascinating media discussion on TED-Ed. Understanding social media The TED Book “Our Virtual Shadow: Why We Are Obsessed with Documenting Our Lives Online” discusses the challenges of social media turning every day folks into journalists. You can read an excerpt of Our Virtual Shadow on the TED blog. Journalism can be much more than reporting. Related:  FAKE NEWS • Source Credibility and Fact-Checking

The Definitive List of 176 Fake News Sites on Facebook Fake news is unavoidable. While the idea of “fake news” was born out of the very real instances of fake news stories helping sway the election in favor of now-President Donald Trump, it has since been co-opted by Trump’s administration to be used as a weapon to sow doubt in legitimate media stories that they find unappealing. But real fake news—not the kind Trump likes to point out on Twitter virtually every day—is pervasive. And if you care about reading truthful stories, you need to be on high alert. Facebook, a primary driver of traffic to publications, came under fire late last year for allowing the promotion of fake news sites that deal in conspiracy theories rather than facts. Both Facebook and Google have responded by cutting these sites out of their advertising networks and otherwise making their stories harder to find. But fake news sites are still out there, and someone on your Facebook friend’s list is probably sharing one of their stories right now. 1. 70news.wordpress.com 3.

Test Your Fake News Judgement with Factitious How false news can spread - Noah Tavlin The term “circular reporting” likely originated in the government and military intelligence community, where ascertaining the validity of information is absolutely critical when there is misinformation intentionally being spread and leaked by one’s opposition. This paper goes into greater detail about how the military intelligence community deals with circular reporting. Sometimes, false information can spread so widely that it becomes accepted as true. For example, the Coati, a relative of the raccoon, native to Brazil, has become alternatively known as “the Brazilian Aardvark.” This blog post details ten of the biggest Wikipedia hoaxes to date. While Wikipedia has high-risk potential to be a source of misinformation—and has been such in the past—its community of editors has become more and more vigilant about catching un-cited or biased edits to pages before they are widely read. Why do we sometimes believe what we read or hear, even when we shouldn’t?

Toolkit To spot bad and misleading information, ask yourself these three simple questions: Where’s it from? A trusted source is your safest option. If you don’t know the source, check out the about page or ask yourself why they’re sharing the story. If there’s no source, search for one. You can search for images to find out where they’ve been seen before or search for the story to see where it started. If it doesn’t look right, be careful. False news can be hidden on websites made to look like the real thing. What’s missing? Get the whole story, not just a headline. One click can help you spot false news. Images and videos can be faked. False news stories often contain images or videos that have been changed. Check what other people say. Check out the sources they give. How do you feel? People who make false news try to manipulate your feelings. They know that making you angry or worried means they’re more likely to get clicks. If it looks too good to be true, it probably is.

Sorting the Real Sandy Photos From the Fakes With Hurricane Sandy approaching the New York metro area, the nation's eyes are turning to its largest city. Photos of storms and flooding are popping up all over Twitter, and while many are real, some of them -- especially the really eye-popping ones -- are fake. This post, which will be updated over the next couple of days, is an effort to sort the real from the unreal. It's a photograph verification service, you might say, or a pictorial investigation bureau. If you see a picture that looks fishy, send it to me at alexis.madrigal[at]gmail.com. If you like this sort of thing, you should also visit istwitterwrong.tumblr.com, which is just cataloging the fakes. The fakes come in three varieties: 1) Real photos that were taken long ago, but that pranksters reintroduce as images of Sandy, 2) Photoshopped images that are straight up fake, and 3) The combination of the first two: old, Photoshopped pictures being trotted out again. And ... it's legit! So the image is most likely a real one.

The Course Pack for Fall 2017 | Stony Brook Center for News Literacy The full News Literacy course, developed at Stony Brook University, organizes the material into 8 concepts that are spread amongst our 14 week course that take students from the first information revolution of Johannes Gutenberg's printing press to the Digital Age of Mark Zuckerberg's Facebook. Each lesson stands alone or can easily be integrated into your program. Below, find a summary of each of those lessons, and a link to the most updated version of the teaching materials for each from our professors at Stony Brook University. You will notice as the semester progresses, the name of some of our lessons change, along with the sequence of the lessons. Updated Course Syllabus for Fall 2018 Lesson 1: What is News Literacy? News Literacy Lesson 1 Course Pack - Updated FALL 2018 In the wake of the latest information revolution, it is up to the consumer to determine whether information is reliable and whether to publish it. Lesson 2: The Power of Information Lesson 4: What Makes News Different?

Media Bias 101: The Difference Between News, Analysis, and Opinion Many media outlets do not properly label content. You can be easily deceived by media bias when you think you’re reading news, but are actually reading someone’s opinion or analysis. These guides can help you learn how to spot the difference. News: What happened. Analysis: What happened and why — writer considers facts and draws conclusions. Opinion: What I think about what happened. How to Spot the Difference Between News, Analysis and Opinion: Examples News: Crackdown "Violation of Human Rights"attributes information to a sourceuses quotes, cites sourcedescribes what is objectively observable (something was said, something happened) to be truly balanced and unbiased, the piece would also include a quote from the other side (in this fictional example, the perspective of law enforcement, or perhaps a bystander or another organization who has a different account of what happened) Julie Mastrine is the Director of Marketing at AllSides. This is an important point in our current landscape.

More people have died from selfies than shark attacks this year A 66-year-old Japanese tourist has died, and his travel companion has been injured, after falling down stairs while attempting to take a selfie at the Taj Mahal. The man's death raises the selfie-related death toll this year — to 12. To put that in perspective, in 2015 there have so far been eight deaths caused by shark attacks. Image: Donte Neal, Mashable It sounds like a joke, but unfortunately it isn't: The deaths are a tragic reminder to travelers that focusing on a phone screen instead of unfamiliar surroundings is not safe. Four of the selfie deaths this year, like the tourist, identified as Hideto Ueda, were caused by falling. The next leading cause of deaths involving selfies was being hit or injured by trains, either because the individual was taking trying to get a photo with a train or because the photo they wanted involved getting on dangerous equipment.

Selfie/shark Refute #alternativefacts Propaganda (noun): Information that is often exaggerated or false and spread for the purpose of benefiting or promoting a specific individual or cause. Fake news is, quite simply, news (“material reported in a newspaper or news periodical or on a newscast”) that is fake (“false, counterfeit”) - #alternativefacts Spin Journalism (noun): News and information that is manipulated or slanted to affect its interpretation and influence public opinion. Opinion (noun): A belief or judgment that rests on grounds insufficient to produce complete certainty. Media Bias/Lean: A political bias in journalistic reporting, in programming selection, or otherwise in mass communications media. Satire: the use of humor, irony, exaggeration, or ridicule to expose and criticize people's stupidity or vices, particularly in the context of contemporary politics and other topical issues. Confirmation Bias: the tendency to interpret new evidence as confirmation of one's existing beliefs or theories. Merriam-Webster