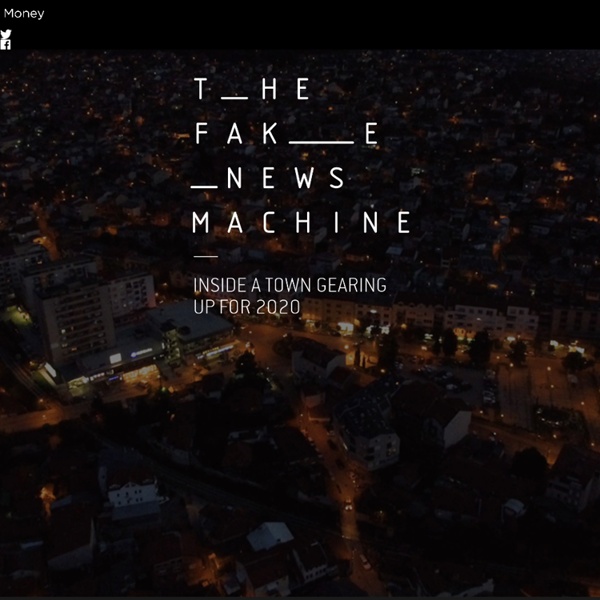 In the weeks following the 2016 presidential election, pundits, politicians and tech titans all sought to figure out whether fake news had affected the outcome. Hillary Clinton publicly castigated the "guys over in Macedonia who are running these fake news sites," and suggested they may have been working with Russia. The New Yorker reported that President Obama spent a day after Trump's victory talking "almost obsessively" with advisers about the stories coming out of Veles.

Pope Francis' associates compare right-wing US Christians with jihadists - The i newspaper online iNews Two leading theologians close to Pope Francis have said that American evangelicals and hard-line Catholics have a worldview that is “not too far apart’’ from jihadists. Their article in the journal Civilta’ Cattolica, which has outraged religious conservatives in the US, goes on to accuse right-wing Catholics and Christians of making an unholy pact with President Trump, and of deepening political polarisation in the United States. Some experts have interpreted the article as a call from Pope Francis himself for the church to dissociate itself from the US administration’s right-wing policies on everything from climate change to migration. Pope Francis has previously hit out at President Donald Trump’s proposals to build a wall between Mexico and the US – a policy the pontiff had said was not Christian.

The tricks propagandists use to beat science Back in the 1950s, health professionals became concerned that smoking was causing cancer. Then, in 1952, the popular magazine Reader’s Digest published “Cancer by the Carton,” an article about the increasing body of evidence that proved it. The article caused widespread shock and media coverage. Today the health dangers of smoking are clear and unambiguous.

Deaf children losing out as English councils cut support, charity warns More than a third of councils in England are cutting educational support totalling £4m for deaf children, according to figures obtained by the National Deaf Children’s Society (NDCS). The figures, gained through freedom of information requests, show that councils in these areas are cutting 10% on average from deaf children’s services, which the charity warns are already near breaking point. In the last four years, one in 10 specialist teachers of the deaf have been cut, the charity claims. Meanwhile, deaf children are falling behind at every stage of school, and at GCSE two-thirds of deaf children fail to achieve a grade 5 in both English and maths – a key government target. The NDCS said it had received responses from 122 councils, of which 45 said they were making cuts between 2017-18 and 2018-19. The cuts come as councils across England struggle to meet growing demand for support for children with special needs.

Memo Restoring Use of Private Prisons Is Good News for One Company Memo Restoring Use of Private Prisons [...] Attorney General Jeff Sessions holds a meeting with the heads of federal law enforcement components at the Department of Justice Feb. 9, 2017 in Washington, DC. (Photo by Susan Walsh-Pool/Getty Images) This post originally appeared at The Nation. "fake news" not new 2 clicks Donald Trump may well be remembered as the president who cried “fake news.” It started after the inauguration, when he used it to discredit stories about the size of the crowd at his inauguration. He hasn’t let up since, labeling any criticism and negative coverage as “fake.” Just in time for awards season, he rolled out his “Fake News Awards” and, in true Trumpian fashion, it appears he is convinced that he invented the term. He didn’t.

Ronald Reagan and The Great Social Security Heist : FedSmith.com View this article online at Ronald Reagan was one of the most popular presidents in modern history. As a former Hollywood actor, he had an uncommon degree of charisma. Some States Spend Billions on Economic Tax Incentives for Little or No Return By one estimate, state and local governments spend at least $45 billion a year on tax breaks and other incentives to lure or keep job-producing businesses and plants in their jurisdictions. New York, for example, plows billions of dollars into the Empire State Development Corp. and Democratic Gov. Andrew Cuomo’s signature Start-Up NY program. For more than three decades, Florida has offered an array of tax incentives to businesses that locate, invest, and hire in the state’s distressed areas through an initiative called the Enterprise Zone Program.

How biased is your news source? You probably won’t agree with this chart Are we even aware of our biases anymore? If you look at this chart and are convinced your “extreme” source belongs in the middle, you just might be part of the problem plaguing America today. “In the past, national evening news programs, local evening news programs, and the front pages of print newspapers were dominated by fact-reporting stories,” says the chart’s creator, patent attorney Vanessa Otero. “Now, however, many sources people consider to be ‘news sources’ are actually dominated by analysis and opinion pieces.” She released the first version of the chart back in 2016, and she’s updated it several times since. Over the past year, it’s gone viral, with thousands of educators at both the high school and college levels using the compelling visual.

Saudi Arabia accused of torturing female activists by electrocution and flogging leaving them unable to walk Campaigners have accused Saudi Arabia of subjecting several activists, including female human rights defenders, imprisoned since May to torture and sexual harassment. More than a dozen women’s rights activists have been detained for months, most of whom had campaigned for the right to drive and an end to the Kingdom’s male guardianship system, but some have since been freed. A group of UN experts last month called for the immediate release of six female human rights defenders they said were still being held incommunicado in Saudi Arabia. The arrests in May followed an earlier crackdown on clerics, intellectuals and activists in September 2017, in an apparent attempt to silence potential opponents of the country’s de facto ruler Crown Prince Mohammed bin Salman. The torture allegations come as Riyadh faces international outcry over the killing last month of dissident Saudi journalist Jamal Khashoggi in the Saudi consulate in Istanbul. Additional reporting by Reuters

60 Environmental Rules on the Way Out Under Trump 1. Revoked Obama-era flood standards for federal infrastructure projects This Obama-era rule, revoked by Mr. Trump in August, required that federal agencies protect new infrastructure projects by building to higher flood standards. Building trade groups and many Republican lawmakers opposed it as costly and burdensome. 2. Teaching Adolescents How to Evaluate the Quality of Online Information An essential part of online research is the ability to critically evaluate information. This includes the ability to assess its level of accuracy, reliability, and bias. In 2012, my colleagues and I assessed 770 seventh graders in two states to study these areas, and the results definitely got our attention. Unfortunately, over 70 percent of the students’ responses suggested that: