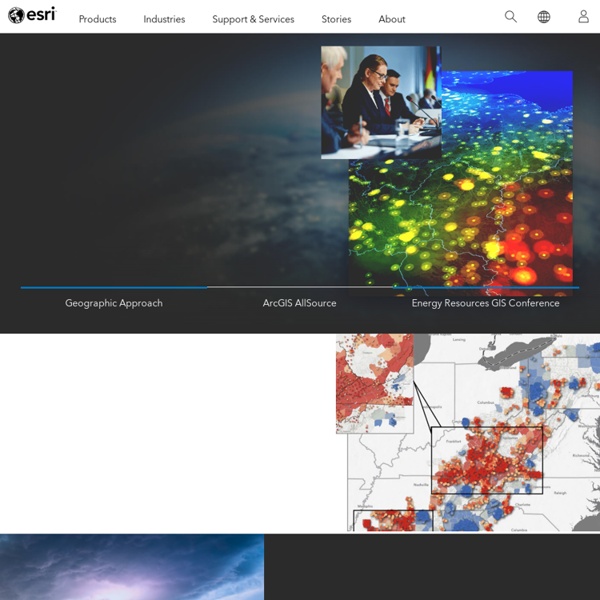 Atlas for the End of the World Précis On May 20, 1570, Abraham Ortelius, book collector and engraver from Antwerp, published the Theatrum Orbis Terrarum (Epitome of the Theater of the World), the world's first atlas… Read more Essay: Atlas for the End? Whereas Ortelius marked out modernity's territorial beginnings, this atlas — by focusing on the remaining habitat in the world's 36 biodiversity hotspots — rakes over its remains. This section explains the philosophy and methodology of the atlas…

GeoDa on Github GeoDa Release This GeoDa 1.12 is the most current version of GeoDa with new features. We found it to be stable but if you encounter a bug, please let us know. You can also report bugs and issues on our Github site. How We Share the World This interactive graphic shows how the world is divided according to six different socioeconomic variables. The land area of each country represents its share of the worldwide total. Click on a circle to reshape the map QGIS Tutorial Items covered in this tutorial include importing spatial data, dealing with projections, basic raster and vector manipulations, using some plugins, and creating a map. Use the links below to access the tutorial and data files: An older version, for QGIS 2.12, and largely still applicable to QGIS 2.x is available here. (For use with the same sample data.)

Map Projections & What They Say About You Comic by Randall Munroe at XKCD Most people go through life perfectly happy in the knowledge that the real earth looks like it does on a standard Mercator projection map. Cartographers, map nerds and those that have seen this scene from the West Wing know that this is not really the case. Wikipedia sums up why map projections are necessary in the first place: Global Mapper - All-in-one GIS Software Global Mapper is an affordable and easy-to-use GIS application that offers access to an unparalleled variety of spatial datasets and provides just the right level of functionality to satisfy both experienced GIS professionals and beginning users. Multivariate attribute querying 3D line exporting from profile paths

Trainspotting: Europe's railway lines - Views of the World Passenger transport in Europe is largely dominated by cars. In the past decade, cars kept a consistent share of around 83 per cent of the modal split within the European Union, followed by buses and coaches (around nine per cent in most recent statistics) and trains (between seven and eight per cent). The modal split describes these modes of transport as ‘transport kilometres travelled by all inland passengers’.

Geographic JSON (geojson) - Note: The data for concluded WGs is occasionally incorrect. Charter for Working Group GeoJSON is a format for encoding data about geographic features using JavaScript Object Notation (JSON) [RFC7159]. Geographic features need not be physical things; any thing with properties that are bounded in space may be considered a feature. Geology of Britain Functionality to search for a borehole can be found under the Menu button, when the Boreholes data mode is selected: In this mode, boreholes are displayed on the map. In ‘3D Below ground’ mode boreholes sticks are displayed below the Earth’s surface. Boreholes are coloured according to whether they have depth information as indicated in the key. Click on a borehole of interest to view some basic information about that borehole and to access a link to view a scan of the borehole record.

Great, thanks. I'm looking to grow my career or take it into a new direction with GIS. by smitterh May 3