How to Hack: Ethical Hacking and Cyber Security 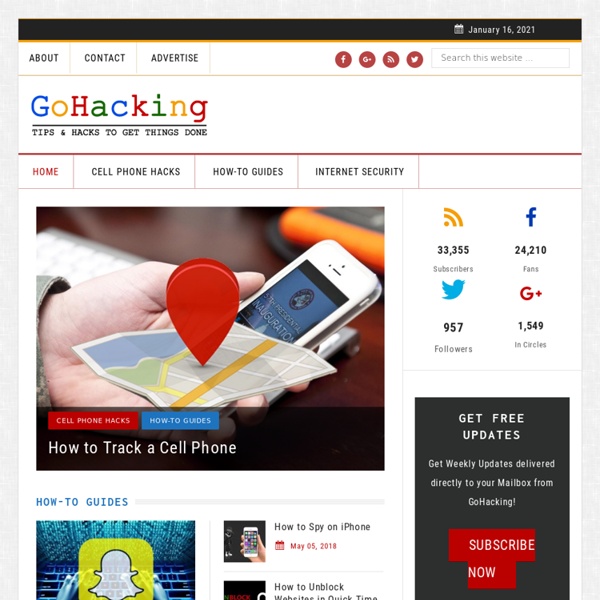 ipconfig - Windows Command Line Utility Updated June 30, 2015. ipconfig is a commmand line utility available on all versions of Microsoft Windows starting with Windows NT. ipconfig is designed to be run from the Windows command prompt. This utility allows you to get the IP address information of a Windows computer. It also allows some control over active TCP/IP connections. ipconfig is an alternative to the older 'winipcfg' utility. ipconfig Usage From the command prompt, type 'ipconfig' to run the utility with default options. The definitive glossary of hacking terminology We live in an era of unprecedented cyberattacks, where malicious campaigns, both personal and governmental, are carried out across laptops and wireless networks. Even if you are not technically minded, your day-to-day life is still probably pretty crowded with stories about hacking, whether you recognize them as such or not. Have you ever installed an antivirus tool on your computer?

Infinity Exists I Got My Computer Back! June 4th, 2009 by Patchy It’s been several years,… but finally Patchy and his computer are reunited at last Download Here Posted in News, Vblog | 9 Comments 64 Things Every Geek Should Know If you consider yourself a geek, or aspire to the honor of geekhood, here’s an essential checklist of must-have geek skills. The term ‘geek’, once used to label a circus freak, has morphed in meaning over the years. What was once an unusual profession transferred into a word indicating social awkwardness. As time has gone on, the word has yet again morphed to indicate a new type of individual: someone who is obsessive over one (or more) particular subjects, whether it be science, photography, electronics, computers, media, or any other field. A geek is one who isn’t satisfied knowing only the surface facts, but instead has a visceral desire to learn everything possible about a particular subject.

Working w/ IP Addresses & Subnets IP addresses are the fundamental method for computers to identify themselves on the Internet and many other computer networks. Learn here how to set up and maintain IP addresses. What Is an IP Address? The glider: an Appropriate Hacker Emblem The Linux folks have their penguin and the BSDers their daemon. Perl's got a camel, FSF fans have their gnu and OSI's got an open-source logo. What we haven't had, historically, is an emblem that represents the entire hacker community of which all these groups are parts. This is a proposal that we adopt one — the glider pattern from the Game of Life. How To Become A Hacker Copyright © 2001 Eric S. Raymond As editor of the Jargon File and author of a few other well-known documents of similar nature, I often get email requests from enthusiastic network newbies asking (in effect) "how can I learn to be a wizardly hacker?".

Change the Windows 7 Login Screen Background Image When you login to your Windows 7 computer (assuming you haven’t used something like this tutorial to turn on automatic login), you’ll generally see a login window with a background looking something like this. It’s fine; there’s nothing wrong with it. But sometimes a change is good so in this article we’ll show you how to change the background image behind the login screen to anything you want. IP Addresses - Working With My IP Addresses IP addresses are the fundamental method for computers to identify themselves on most computer networks. Every computer (or other network device) connected to the Internet has an IP address. This tutorial explains the basics of finding, changing, and hiding (your) my IP addresses.