The High Price of the Opioid Crisis 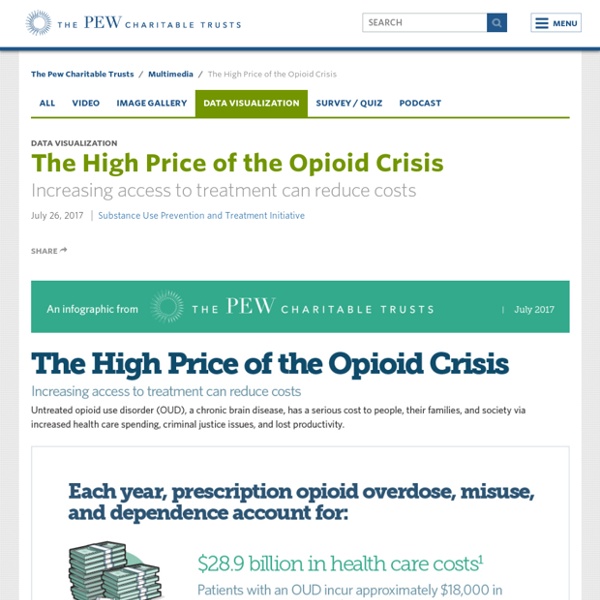 James Comey, You're Fired: A Video Timeline James Comey, You're Fired: A Video Timeline Trump and Russia: It all could end in a scandal without precedent. At this point nobody knows. But career litigator Steven Harper is determined to make sure that the public doesn’t go without the information it needs to make sense of the dense and troubling morass — all the information. In an interview with Bill Moyers, Harper warned of the dangers of news fatigue and political complacency: Florida health care system finishes at bottom of pack, study finds Florida’s poor showing on a recent ranking of state health care systems can be attributed partly to the large number of lower-wage jobs in the Sunshine State and its decision not to expand Medicaid, which would have come with its own significant costs over the long term, health care experts said. The personal finance website WalletHub.com reported that Florida came in No. 43 in its ranking of state health care systems. Florida received poor marks for its relatively low percentage of adults and children with health insurance and its high premium costs. The study measured health care costs, accessibility and outcomes. Florida received a score of 46.07, with a score of 100 representing the best-quality health care at the most affordable price. The state ranked dead last among states and the District of Columbia in its percentage of insured adults aged 18 to 64, according to the WalletHub study, and came in at No. 47 for its percentage of insured children 17 years and under.

The Unbelievable Story of the Japanese Man Who Survived BOTH Atomic Bombs Tsutomu Yamaguchi may very well have been both the luckiest and most unlucky man ever. On August 6, 1945, he was riding a small trolley across the city of Hiroshima. Yamaguchi recalls hearing the roar of an aircraft engine in the skies above during the ride, but thought nothing of it, since warplanes were constantly flying overhead during that time. Two-thirds of those on Medicaid are children, seniors or disabled One-third of New York state residents are on Medicaid, the federal-state program that helps pay for health care. We recently rated that claim True in a fact-check on U.S. Rep. How much did the Louisiana Purchase actually cost? Wikimedia Commons/White House Historical Association It’s a familiar chapter in our history, part of the triumphant narrative of westward expansion: In 1803, the United States bought a massive chunk of North America, and we got it for a song. Spain had ceded the Louisiana Territory to France, and Napoleon, in turn, offloaded it to American diplomats in Paris after the Haitian Revolution ruined his plans for the New World. Vaguely defined at the time as the western watershed of the Mississippi River, and later pegged at about 827,000 square miles, the acquisition nearly doubled the national domain for a mere $15 million, or roughly $309 million in today’s dollars. Divide the area by the price and you get the Louisiana Purchase’s celebrated reputation as one of the greatest real estate bargains in history. Historians have long known that Indians were paid something for their soil rights, but we’ve never been able to say how much.

Many operations more harmful than beneficial, top surgeon warns Too many surgeons are performing operations that are likely to do more harm than good, a leading orthopaedic surgeon says. About half of orthopaedic surgical procedures have no scientific evidence from randomised trials proving they work better than non-operative treatment, Ian Harris told a meeting of 1900 surgeons this week. Research showed another 25 per cent are no better than non-surgical alternatives, he said. Yet many of these are still being performed. Professor Harris, of the University of NSW, said ineffective and potentially harmful operations included knee arthroscopy for arthritis, some forms of spinal surgery for low back pain, Achilles tendon repairs, some shoulder arthroscopic procedures, and wrist and ankle fracture fixations.

Photo: Stefan Ruenzel Crowds of incontestable size spelled out "Resist!!" with their bodies this morning while sitting and standing on the sands of Ocean Beach. Taking back control: how a remote island in Alaska tackled domestic abuse When Stacy Bourdukofsky’s abusive ex-husband touched down on the small island where they live to stand trial for strangling his girlfriend and whacking a man in the head with a bat, she was waiting to board the outbound flight on the same jet. She’d gone to extreme measures to escape him in the past, and she wasn’t about to let him unnerve her this time around. “My first marriage was a nightmare. It was constant drinking, and it was always beatings.