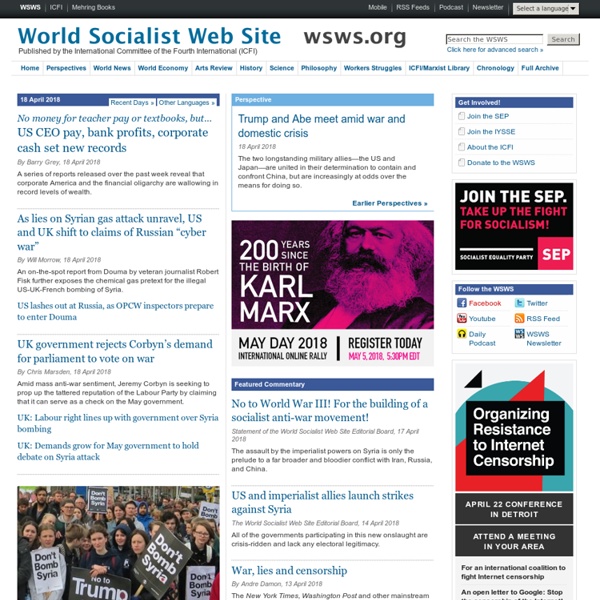 Right to Private Property The right to private property is the social-political principle that adult human beings may not be prohibited or prevented by anyone from acquiring, holding and trading (with willing parties) valued items not already owned by others. Such a right is, thus, unalienable and, if in fact justified, is supposed to enjoy respect and legal protection in a just human community. One reason that it must be shown that the social regulative principle of a right to private property is sound and that it ought to be respected and protected in human community life is that it is a vital conceptual or logical implication of the individualist story.

Centrists Are the Most Hostile to Democracy, Not Extremists A rally last September in Berlin for Martin Schulz, the Social Democrats’ candidate for German chancellor. Maja Hitij/Getty Images The warning signs are flashing red: Democracy is under threat. Across Europe and North America, candidates are more authoritarian, party systems are more volatile, and citizens are more hostile to the norms and institutions of liberal democracy. These trends have prompted a major debate between those who view political discontent as economic, cultural or generational in origin. But all of these explanations share one basic assumption: The threat is coming from the political extremes.

The U.S. Media Yesterday Suffered its Most Humiliating Debacle in Ages: Now Refuses All Transparency Over What Happened Friday was one of the most embarrassing days for the U.S. media in quite a long time. The humiliation orgy was kicked off by CNN, with MSNBC and CBS close behind, with countless pundits, commentators and operatives joining the party throughout the day. By the end of the day, it was clear that several of the nation’s largest and most influential news outlets had spread an explosive but completely false news story to millions of people, while refusing to provide any explanation of how it happened. The spectacle began on Friday morning at 11:00 am EST, when the Most Trusted Name in News™ spent 12 straight minutes on air flamboyantly hyping an exclusive bombshell report that seemed to prove that WikiLeaks, last September, had secretly offered the Trump campaign, even Donald Trump himself, special access to the DNC emails before they were published on the internet. This entire revelation was based on an email which CNN strongly implied it had exclusively obtained and had in its possession.

Freedom and Responsibility – A Guide to Ethics The Value of Freedom Some philosophers hold that freedom is intrinsically valuable; it is good for its own sake. The plausibility of this position may be illustrated by the (likely) fact that if you are walking along and someone shouts out in a commanding voice “STOP!” and you stop walking, you will rightly expect there to be a good reason that justified this interference. US military agency invests $100m in genetic extinction technologies A US military agency is investing $100m in genetic extinction technologies that could wipe out malarial mosquitoes, invasive rodents or other species, emails released under freedom of information rules show. The documents suggest that the US’s secretive Defense Advanced Research Projects Agency (Darpa) has become the world’s largest funder of “gene drive” research and will raise tensions ahead of a UN expert committee meeting in Montreal beginning on Tuesday. The UN Convention on Biological Diversity (CBD) is debating whether to impose a moratorium on the gene research next year and several southern countries fear a possible military application. UN diplomats confirmed that the new email release would worsen the “bad name” of gene drives in some circles. “Many countries [will] have concerns when this technology comes from Darpa, a US military science agency,” one said.

The Putative Fascism of the Kyoto School Abstract: Kyoto School thinkers have been labeled as fascists by a number of prominent contemporary critics, but their criticisms are not based on good scholarship. Important issues are obscured by such politically correct Japanology. Examples include an essay by Tetsuo Najita and H.D. Term of the Senate, [26 June] 1787 Read moved that the term be nine years. Mr. Madison. Laissez Faire Capitalism "Laissez Faire" is French for "leave alone" which means that the government leaves the people alone regarding all economic activities. It is the separation of economy and state. There are two ways that a government typically is tempted to interfere with the economy. The first is through the initiation of force, and the second is through socialized industries. Neither of these activities are aligned with the proper role of government, and are both unacceptable. "Laissez Faire Capitalism" is actually redundant, due to the nature of Capitalism.

Power and Ideology How does the state’s ruling class engineer the consent of the governed to its authority and legitimacy? In brief, the ruling class uses the power of the state to secure its privileges. Force is one technique, but force must seem legitimate otherwise the majority (the ruled) will revolt. Therefore, to win the assent of the ruled, the ruling class cultivates ideology and loyalty through discretionary law enforcement. The criminal law’s lessons (justice, majesty, and mercy), elicit the sanction of the victimized subjects. This benign face of criminal law masks the gallows and the death sentence. Nation vs Culture - What's the difference? Etymology 1 (etyl) ). Noun (en-noun) An historically constituted, stable community of people, formed on the basis of a common language, territory, economic life, ethnicity and/or psychological make-up manifested in a common culture (chiefly|historical) An association of students based on their birthplace or ethnicity. (jump)

The Flap Over Replacement Migration (June 2000) A draft report on replacement migration by the UN Population Division has captured the attention — and raised the eyebrows — of international audiences. The report's projections, that over the next 50 years the populations of virtually all countries of Europe as well as Japan will face population decline and population aging, are not surprising. Its conclusion, however — that these twin challenges may require huge influxes of immigrants — has prompted swift reaction from across Europe and Asia. Migrants Needed by 2050 Migrants needed by 2050 to maintain the ratio of workers to older people. Postmodern Politics Postmodern Politics – Introduction Richard Rorty gives us a great snapshot of Postmodern politics, “I see the ‘orthodox’ (the people who think that hounding gays out of the military promotes traditional family values) as the same honest, decent, blinkered, disastrous people who voted for Hitler in 1933. I see the ‘progressives’ as defining the only America I care about.”1 As keen observers of the Postmodern condition, Steven Best and Douglas Kellner comment on the current status of Postmodern politics: “As with postmodern theory, there is no one ‘postmodern politics,’ but rather a conflicting set of propositions that emerges from the ambiguities of social change and multiple postmodern theoretical perspectives.”2 Postmodern politics takes a variety of forms. On one end of the spectrum is the “anti-politics” of Baudrillard, a “cynical, despairing rejection of the belief”3 that politics can be used to change society. Learn More!