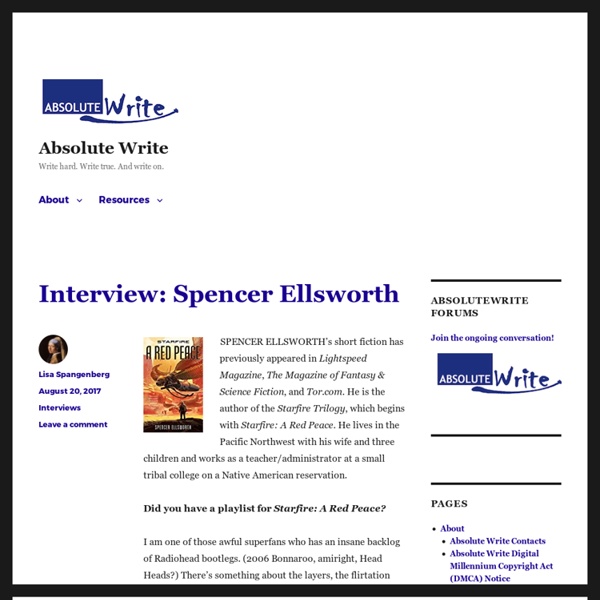 Guest Post by Francesca StaAna Wondering why your articles aren’t getting a lot of views or clicks? Stressing about the fact that you’re not getting enough repeat clients? You might be committing these deadly freelance writing mistakes: Silence (Not following up) – Contrary to what some might think, just because a prospect doesn’t immediately respond to your first call or email, it doesn’t necessarily mean that they’re not interested. Yes, most of them probably don’t need your services, but there ARE some potential clients who are simply too busy to respond.

Blog » Top Web Resources for Writers (Part 1) There’s a reason why the Internet was called the “information superhighway” in the 1990s. Although the term itself is somewhat out of date, the significance is not. Today’s search engines pull up thousands of web pages in seconds, so which sites should you be visiting and why? Here are some of our suggestions:

The Psychology of Writing and the Cognitive Science of the Perfect Daily Routine Reflecting on the ritualization of creativity, Bukowski famously scoffed that “air and light and time and space have nothing to do with.” Samuel Johnson similarly contended that “a man may write at any time, if he will set himself doggedly to it.” And yet some of history’s most successful and prolific writers were women and men of religious daily routines and odd creative rituals. (Even Buk himself ended up sticking to a peculiar daily routine.) Seven Tips From Ernest Hemingway on How to Write Fiction Image by Lloyd Arnold via Wikimedia Commons Before he was a big game hunter, before he was a deep-sea fisherman, Ernest Hemingway was a craftsman who would rise very early in the morning and write. His best stories are masterpieces of the modern era, and his prose style is one of the most influential of the 20th century.

50 of the Best Websites for Writers - StumbleUpon There are tons of reference sites on the web that can help you find a job or write a poem, essay or story. Here is a list of the best 50 websites for writers. Reference Websites Merriam-Webster Online - Merriam Webster is the perfect place to look up words and find information. The site offers a dictionary, thesaurus, encyclopedia, podcasts, word games and a lot of other things that may be of interest to writers and word-lovers. Bartleby - This site is good if you need a quote or if you want free access to encyclopedias, dictionaries, thesauri, and other reference books.

Searching for New Writing Markets? Try These Tips and Journals (kathysteinemann.com) Are you a writer or a poet? Have you considered publishing in literary journals? Here are tips for finding markets, and a section with links to four paying journals. The Basics Ten Obvious Truths About Fiction The following essay was previewed in the class that Stephen Graham Jones taught for LitReactor, Your Life Story Is Five Pages Long. 1. The reader should never have to work to figure out the basics of your story. Who’s whose wife or husband, what the time period is if that matters, why these people have broken into this house, and on and on, just the basic, ground-level facts about your story. If you don’t relay that stuff up-front, as quickly and efficiently as possible (and please don’t be fancy), then your story becomes a game of three-card-monty, with you hiding information under this or that shell, trying to keep everything moving fast enough that nobody knows what’s going on. Which is to say your story becomes about the reading of the story, not the experience the story is trying to get the reader to engage.

David Foster Wallace on Why You Should Use a Dictionary, How to Write a Great Opener, and the Measure of Good Writing By Maria Popova “Readers who want to become writers should read with a dictionary at hand,” Harvard psycholinguist Steven Pinker asserted in his indispensable guide to the art-science of beautiful writing, adding that writers who are “too lazy to crack open a dictionary” are “incurious about the logic and history of the English language” and doom themselves to having “a tin ear for its nuances of meaning and emphasis.” But the most ardent case for using a dictionary came more than a decade earlier from none other than David Foster Wallace. In late 1999, Wallace wrote a lengthy and laudatory profile of writer and dictionary-maker Bryan A.

Pixar’s 22 Golden Rules of Storytelling Back in 2011, then Pixar storyboard artist Emma Coats (now freelancing) tweeted 22 rules of storytelling, according to Pixar. Coats learned the ‘guidelines’ from senior colleagues on how to create appealing stories, tweeting the nuggets of wisdom over a 6 week period. Last week, artist and User Experience Director at Visceral Games (a subsidiary of Electronic Arts), Dino Ignacio, created a series of image macros of the 22 rules and posted them to Imgur and Reddit. Below you will find the list of image macros along with a text summary of Pixar’s 22 rules of storytelling at the end of the post. Enjoy! [Sources: Emma Coats, Dino Ignacio, The Pixar Touch]

It was a dark and stormy night "It was a dark and stormy night" is an often-mocked and parodied phrase[1] written by English novelist Edward Bulwer-Lytton in the opening sentence of his 1830 novel Paul Clifford.[2] The phrase is considered to represent "the archetypal example of a florid, melodramatic style of fiction writing,"[1] also known as purple prose. The phrase comes from the original opening sentence of Paul Clifford: It was a dark and stormy night; the rain fell in torrents — except at occasional intervals, when it was checked by a violent gust of wind which swept up the streets (for it is in London that our scene lies), rattling along the housetops, and fiercely agitating the scanty flame of the lamps that struggled against the darkness. Evaluations of the opening sentence[edit] Writer's Digest described this sentence as "the literary posterchild for bad story starters".[3] On the other hand, the American Book Review ranked it as #22 on its "Best first lines from novels list

Stephen King's Top 20 Rules for Writers Image by the USO, via Flickr Commons In one of my favorite Stephen King interviews, for The Atlantic, he talks at length about the vital importance of a good opening line. “There are all sorts of theories,” he says, “it’s a tricky thing.” “But there’s one thing” he’s sure about: “An opening line should invite the reader to begin the story. It should say: Listen.