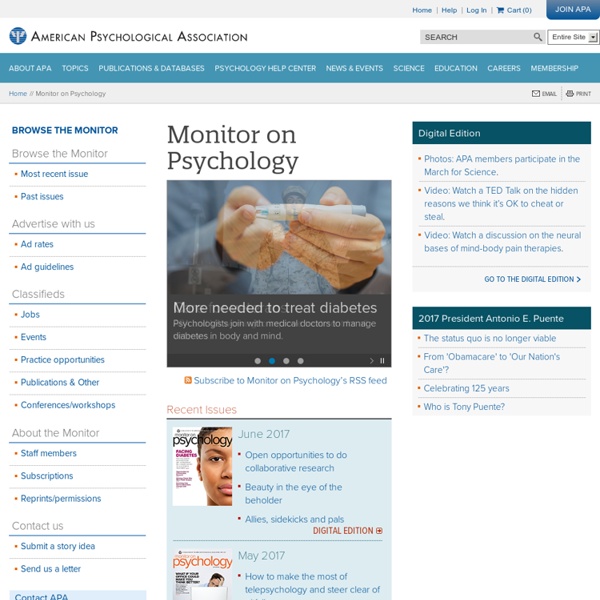 American Psychological Association (APA) All About Psychology The Psychologist A Brief Review of Creativity "Creativity is not the finding of a thing, but the making something out of it after it is found." --James Russell Lowell Often times creativity is thought to be artistic, lofty, intelligent, out-of-the-ordinary, and beyond understanding. However, creativity comes in much simpler forms such as formulating a solution to an everyday problem; if someone runs out of fuel on the highway, the person must think of a way to get to his/her destination, and this requires creativity even if it is in its simplest form. Creativity can be observed in the unusual as well. References Anderegg, D. & Gartner, G. (2001). The Cognitive Costs of Multitasking By Kendra Cherry Updated May 22, 2015. Quick Overview: Multitasking can reduce productivity by approximately 40-percent according to some researchers.Switching from one task to another makes it difficult to tune out distractions and can cause mental blocks that can slow you down. Is All That Multitasking Really Making You More Productive? Take a moment and think about all of the things you are doing right now. Perhaps you're also listening to music, texting a friend, checking your email in another browser tab, or playing a computer game. If you are doing several different things at once, then you may be what researchers refer to as a "heavy multitasker." In the past, many people believed that multitasking was a good way to increase productivity. continue reading below our video Play Video Recent research, however, has demonstrated that that switching from one task to the next takes a serious toll on productivity. What the Research on Multitasking Suggests Learn more about: References

All IQ tests, fun quizzes, personality tests, love quizzes and much more Psychology Resources in India and World 5 Essential Books and Talks on the Psychology of Choice by Maria Popova The psychology of spaghetti sauce and why too many jams make you lose your appetite. Why are you reading this? Today, at the risk of meta-irony, we look at not one but five fantastic books and talks that explore the subject. Among other things, Jonah Lehrer writes the excellent Frontal Cortex blog for Wired, one of our favorites. Amazon has a nice Q&A with Lehrer on the book page, in which he addresses everything from neuroscience to how he handles the cereal aisle. Barry Schwartz studies the relationship between economics and psychology. We may have had our public disagreements with the king of pop psychology, but Malcolm Gladwell does have a penchant for synthesizing diverse research, connecting the dots, and distilling the gist for the laymen of the land. Behavioral economist Dan Ariely has dedicated his career to expoloring the curious ways in which people make choices through odd, unorthodox and often amusing experiments. Donating = Loving Share on Tumblr

Howard Gardner | Papers Please note: These papers are provided for research purposes only. These works may not be excerpted or otherwise quoted for commercial purposes without express written consent from the author. For a full list of books, scholarly articles, topical articles, reviews, and activities, please see Gardner’s Long Vita. To see Gardner’s most cited works, visit his Google Scholar page. Long Vita (PDF)Short Vita (PDF) Peterson, A., Mucinskas, D., and Gardner, H. (2016). Gardner, H. (2008, January 12). “How MI Theory fits into traditional and modern China” by Jie-Qi Chen (PDF) “The Transmission and Reception of MI Theory in Contemporary China” by Dr.

Freud's Conscious and Unconscious Mind By Kendra Cherry Updated December 17, 2015. Psychoanalyst Sigmund Freud believed that behavior and personality derives from the constant and unique interaction of conflicting psychological forces that operate at three different levels of awareness: the preconscious, the conscious, and the unconscious. What do these terms mean? The Mind According to Freud Many of us have experienced what is commonly referred to as a Freudian slip. These misstatements are believed to reveal underlying, unconscious thoughts or feelings. James has just started a new relationship with a woman he met at school. If you were in this situation, how would you explain this mistake? The psychoanalytic view holds that there are unconscious, inner forces outside of your awareness that are directing your behavior. continue reading below our video Play Video For example, a psychoanalyst might say that James misspoke due to unresolved feelings for his ex or perhaps because of misgivings about his new relationship.