The Perfect Boob Throughout History, From Big Ol' Things To Bee Stings 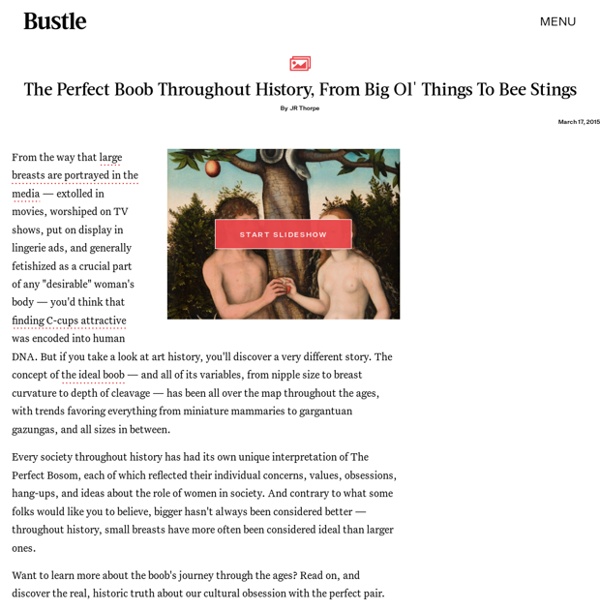 From the way that large breasts are portrayed in the media — extolled in movies, worshiped on TV shows, put on display in lingerie ads, and generally fetishized as a crucial part of any "desirable" woman's body — you'd think that finding C-cups attractive was encoded into human DNA. But if you take a look at art history, you'll discover a very different story. The concept of the ideal boob — and all of its variables, from nipple size to breast curvature to depth of cleavage — has been all over the map throughout the ages, with trends favoring everything from miniature mammaries to gargantuan gazungas, and all sizes in between. Every society throughout history has had its own unique interpretation of The Perfect Bosom, each of which reflected their individual concerns, values, obsessions, hang-ups, and ideas about the role of women in society. Want to learn more about the boob's journey through the ages? Want to learn more about the boob's journey through the ages?

Gibson Girl The Gibson Girl was the personification of the feminine ideal of physical attractiveness as portrayed by the pen-and-ink illustrations of artist Charles Dana Gibson during a 20-year period that spanned the late 19th and early 20th centuries in the United States.[1] The artist saw his creation as representing the composite of "thousands of American girls". Image[edit] Gibson Girls at the beach "Woman: the Eternal Question"

This Ad Was Rejected By The Oscars For Being “Too Graphic”, But It Shows The Reality Of A New Mom As Hollywood’s A-list celebrities were walking down the red carpet at this year’s Academy Awards, a new Frida Mom postpartum ad was causing controversy for not being accepted to the party. ABC refused to show the commercial during their three-hour broadcast of the Oscars, saying it was “too graphic”. The clip shows a new mom during the first days after giving birth, facing the effects it has had on her body. There’s the postpartum belly, the mesh underwear she received at the hospital, her problematic journey to the bathroom, and the pad she must wear as her body continues to bleed. ABC explained their reasoning by citing the Academy of Motion Picture Arts and Sciences guidelines: “Advertisement of the following is not permitted: Political candidates/positions, religious or faith-based message/position, guns, gun shows, ammunition, feminine hygiene products, adult diapers, condoms or hemorrhoid remedies.”

How the new coronavirus surges compare to New York City’s peak By Kennedy Elliott and Nsikan Akpan July 9, 2020 COVID-19 has been described as a once-in-a-century pandemic, with New York City as the iconic early epicenter for the United States. Smile! Could the pandemic lead to happier times? In January 2018, a Yale University professor named Laurie Santos launched a course, Psychology and the Good Life, which quickly became the most popular class in the institution’s 319-year-history. After 13 years at Yale, in 2016, the 44-year-old had taken charge of one of the university’s residential colleges and had become alarmed by widespread mental illness and stress. She wanted to explain the paradox of why so many students were still suffering, having achieved their dreams of being admitted to Yale and having met society’s definition of success.

50 Photos To Remind Everyone That Many Animals Are Way Bigger Than Most Of Us Think We usually imagine felines as cute little furballs who, no matter how fast they grow up, still fit into our lap just fine. But there’s one cat breed known as the Maine coon that can easily reach up to 40 inches. In comparison, the average size of an adult domestic cat comes in at as little as 8 to 10 inches.

Audrey Munson Early life[edit] Career[edit] Munson returned to New York in 1919 and was living with her mother in a boarding house owned by Dr. Walter Wilkins. Wilkins fell in love with Munson and murdered his wife, Julia, so he could be available for marriage.[1] Although Munson and her mother had left New York prior to the murder, the police still wished to question them, resulting in a nationwide hunt for them. Why Women Have to Wait in Longer Bathroom Lines Than Men Do But regular old bathroom-goers are probably not keen on familiarizing themselves with the intricacies of plumbing-code development. “The average person wouldn’t understand these ratios and understand which codes apply, so they don’t really know where to complain—they’re just miserable,” says Dufresne, of the Institute for Human Centered Design. The last objection to fixating on codes is a more philosophical one, about the limits of thinking numerically. As I spoke with architects, plumbing engineers, and design scholars for this piece, it became clear that building codes are looked to as a neutral, value-free lodestar, even though they have a strongly gendered history. As Greed has written, when it comes to restroom design, “an obsession with structural and technical issues predominates over social, ergonomic, health, equality, accessibility, and livability issues, with women’s needs peripheral.” Potty parity is just one salutary outcome of gender-neutral bathrooms.

untitled One couple from Singapore, fed up with their coronavirus quarantine a few months ago, decided to get creative and launch a website that satisfies the wanderlust in us all since most of us can’t travel right now.The result was “WindowSwap,” a site that presents visitors with video snippets of what you see when looking through the windows in peoples’ homes from around the world.The submissions have come everywhere from Giza to Brooklyn, and so many points in between. About two months ago, during what they describe as the strictest part of the coronavirus quarantine in Singapore, Sonali Ranjit and Vaishnav Balasubramaniam were starting to get restless and feel “a little antsy” in the couples’ one-bedroom apartment. Scrolling through their Instagram feed one day, they spied a post from a friend who lives in Barcelona. He’d shared an image of the view from his window, looking out into the northeastern Spanish city he calls home.

A field guide to Trump's dangerous rhetoric All leaders are demagogues. You may not realize this, because we’ve come to associate the word “demagogue” with only dangerous populist leaders. But in Greek, the word just means “leader of the people” (dēmos “the people” + agōgos “leading”). The U.S. was one of the last countries to abolish slavery As the Black Lives Matter protests have continued over the past two months, there has been an influx of misinformation surrounding the group’s donations and goals. A recent Facebook post suggested that Black Lives Matter protestors don’t know America’s history with slavery. The post reads: "Slavery used to be a normal throughout the world. America was the ONLY country that ended it! Black people owned slaves, too. White people were slaves, too.

"Weird Beauty" series by Alexander Khokhlov Moscow-based photographer Alexander Khokhlov uses the human face as his canvas for creating graphic, black and white illustrations. From the WiFi icon to the skip of a pulse line across his model's eyes, Khokhlov's vision is extraordinarily unique. Rather than relying on canvas, paper, or any other synthetic material as his foundation, Khokhlov relies on the beauty and lines of the feminine face to form this project, entitled Weird Beauty. The well designed face art, combined with simple and elegant female faces, presents viewers with a complex optical illusion of positive and negative space. Our eye is naturally and initially attracted to the strong black and white graphics painted by artist Valeriya Kutsan. But, after that, we are visually invited to explore the multiple layers of the photograph, from the swirls of perfect lines to the flawless skin, long lashes, piercing eyes, and emotionless expressions found beneath the paint.