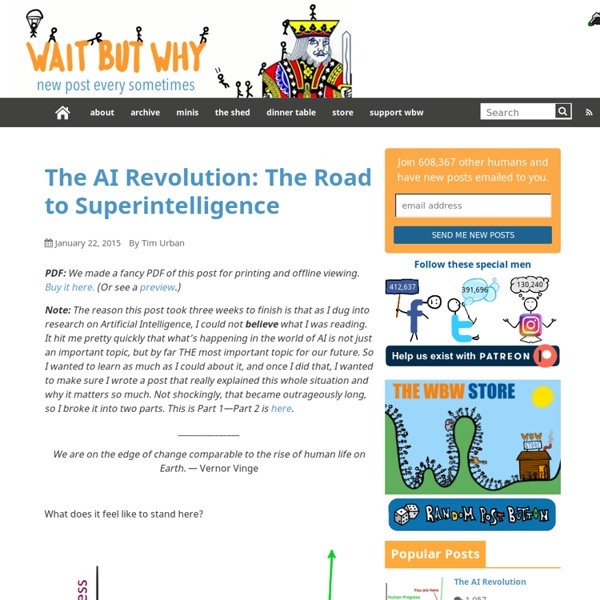 PDF: We made a fancy PDF of this post for printing and offline viewing. Buy it here. (Or see a preview.) Note: The reason this post took three weeks to finish is that as I dug into research on Artificial Intelligence, I could not believe what I was reading. It hit me pretty quickly that what’s happening in the world of AI is not just an important topic, but by far THE most important topic for our future. So I wanted to learn as much as I could about it, and once I did that, I wanted to make sure I wrote a post that really explained this whole situation and why it matters so much. We are on the edge of change comparable to the rise of human life on Earth. — Vernor Vinge What does it feel like to stand here? It seems like a pretty intense place to be standing—but then you have to remember something about what it’s like to stand on a time graph: you can’t see what’s to your right. Which probably feels pretty normal… The Far Future—Coming Soon This works on smaller scales too. 1. What Is AI?

Related:  How it works • Computers • Rousting

'The goal is to automate us': welcome to the age of surveillance capitalism We’re living through the most profound transformation in our information environment since Johannes Gutenberg’s invention of printing in circa 1439. And the problem with living through a revolution is that it’s impossible to take the long view of what’s happening. Hindsight is the only exact science in this business, and in that long run we’re all dead. Printing shaped and transformed societies over the next four centuries, but nobody in Mainz (Gutenberg’s home town) in, say, 1495 could have known that his technology would (among other things): fuel the Reformation and undermine the authority of the mighty Catholic church; enable the rise of what we now recognise as modern science; create unheard-of professions and industries; change the shape of our brains; and even recalibrate our conceptions of childhood. And yet printing did all this and more. Why choose 1495?

The Artificial Intelligence Revolution: Part 2 - Wait But Why Note: This is Part 2 of a two-part series on AI. Part 1 is here. PDF: We made a fancy PDF of this post for printing and offline viewing. Buy it here. (Or see a preview.) We have what may be an extremely difficult problem with an unknown time to solve it, on which quite possibly the entire future of humanity depends. — Nick Bostrom

Lise Meitner – the forgotten woman of nuclear physics who deserved a Nobel Prize Nuclear fission – the physical process by which very large atoms like uranium split into pairs of smaller atoms – is what makes nuclear bombs and nuclear power plants possible. But for many years, physicists believed it energetically impossible for atoms as large as uranium (atomic mass = 235 or 238) to be split into two. That all changed on Feb. 11, 1939, with a letter to the editor of Nature – a premier international scientific journal – that described exactly how such a thing could occur and even named it fission. The Great Battle of Fire and Light — Wait But Why Note: This is the second post in the series. The first one is here. There is a great deal of human nature in people. – Mark Twain The animal world is a stressful place to be. The problem is that the animal world isn’t really an animal world—it’s a world of trillions of strands of genetic information, each one hell-bent on immortality.

At Scale, Rare Events aren’t Rare – Perspectives I’m a connoisseur of failure. I love reading about engineering failures of all forms and, unsurprisingly, I’m particularly interested in data center faults. It’s not that I delight in engineering failures. My interest is driven by believing that the more faults we all understand, the more likely we can engineer systems that don’t suffer from these weaknesses.

Course Mapping - Center for Teaching and Learning Maps are all around us: on our phones, in our cars, in public spaces—just about anywhere. We use them to navigate traffic, go on road trips, illustrate concepts; put simply, they show us the way from Point A to Point B. By illustrating roads, traffic, and terrain, maps display how to get somewhere and what might happen along the way. Essentially, maps provide a high-level overview of new or unfamiliar territory, allowing us to journey safely and efficiently. Designing an online course can also present unfamiliar territory.

It’s true: millions in dark money has been spent to tilt courts right After the Supreme Court agreed this term to hear a Second Amendment case brought by an NRA affiliate, several Senate Democrats cried foul. To influence the court’s composition, Whitehouse said, a combined $34 million in "dark money" went toward both blocking President Barack Obama’s Supreme Court nominee Merrick Garland and confirming President Donald Trump’s two Supreme Court picks, Justices Neil Gorsuch and Brett Kavanaugh. In a follow-up to the legal brief, Whitehouse in a Sept. 6 Washington Post op-ed described the money as follows: "One unnamed donor gave $17 million to the (Leonard) Leo-affiliated Judicial Crisis Network to block the nomination of Judge Merrick Garland and to support Gorsuch; then a donor — perhaps the same one — gave another $17 million to prop up Kavanaugh." It can be difficult to trace the path of anonymous political spending with precision, and we wanted to know the factual basis for Whitehouse’s claim.

Linux nslookup command help and examples Updated: 04/26/2017 by Computer Hope About nslookup The nslookup command is used to query internet name servers interactively for information. Overview nslookup, which stands for "name server lookup", is a useful tool for finding out information about a named domain. By default, nslookup will translate a domain name to an IP address (or vice versa). Growing brains in labs: why it's time for an ethical debate “I have never seen so many brains out of their heads before!” declares Dr Michael Hfuhruhurr, the world-renowned neurosurgeon played by Steve Martin who has a love affair with a brain in a jar in the 1983 movie, The Man with Two Brains. Thirty five years on, the prospect of falling for a disembodied brain is still looking slim, but researchers have made such progress in growing and maintaining human brain tissue in the lab that a group of scientists, lawyers, ethicists and philosophers have called for an ethical debate about the work.