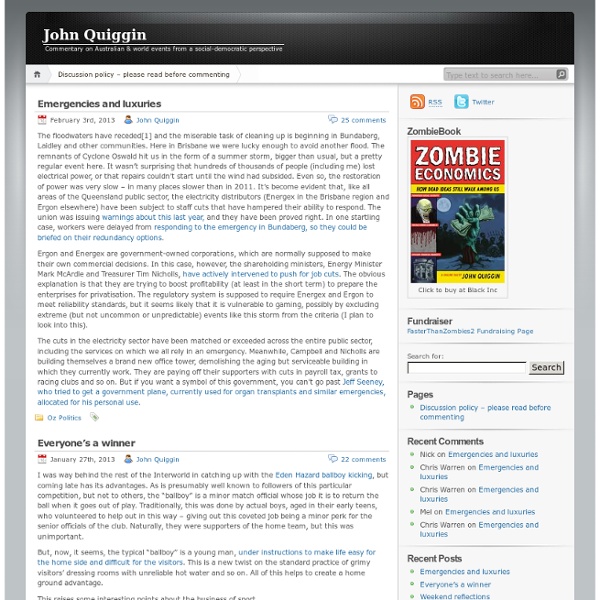 John Quiggin John Quiggin (born March 29, 1956) is an Australian economist, a Professor and an Australian Research Council Federation Fellow and a Laureate Fellow at the University of Queensland, and a member of the Board of the Climate Change Authority of the Australian Government.[1][2] Education[edit] Academic and professional career[edit] From 1989 to 1990 he was an Associate Professor in the Department of Agricultural and Resource Economics of the University of Maryland, College Park, a Fellow of the Research School of Social Sciences of Australian National University from 1991 to 1992, a Senior Fellow from 1993 to 1994 and a Professor in 1995 at the Centre for Economic Policy Research of the Australian National University in 1995. From 1996 to 1999 Quiggin was a Professor of Economics and Australian Research Council Senior Fellow at James Cook University. Other work[edit] He was appointed in 2012 to the Board of the Climate Change Authority of the Australian Government.[1] Awards[edit] 1994.

How I Became a Keynesian Until last September, when the banking industry came crashing down and depression loomed for the first time in my lifetime, I had never thought to read The General Theory of Employment, Interest, and Money, despite my interest in economics. I knew that John Maynard Keynes was widely considered the greatest economist of the twentieth century, and I knew of his book's extraordinary reputation. But it was a work of macroeconomics--the study of economy-wide phenomena such as inflation, the business cycle, and economic growth. Law, and hence the economics of law--my academic field--did not figure largely in the regulation of those phenomena. We have learned since September that the present generation of economists has not figured out how the economy works. Baffled by the profession's disarray, I decided I had better read The General Theory. The General Theory is a hard slog, though not because it is mathematical. The lag can retard economic growth. And workers are not fungible.

Slow Noodle Crooked Timber — Out of the crooked timber of humanity, no straight thing was ever made Cut taxes not spending, says ex-Monetary Policy Committee member Blanchflower Mr Blanchflower, a staunch opponent of the austerity consensus, has urged the Coalition to abandon its spending cuts and, instead, offer workers a tax holiday to stimulate spending and fuel growth. He has called for a reduction in employees' National Income contributions (NICs) from 11pc to 5pc for two years and across all income groups "immediately". "This would encourage individuals to spend more, and companies would boost hiring because of the lower price of labour," he said. "The danger is the Coalition's policies will push the economy back into recession... By scrapping "the austerity Budget and its planned tax increases" and awarding workers a two-year "holiday" on NICs, public spending would be roughly £28bn higher than planned this year and £35bn higher in 2011. The extra borrowing required would inevitably drive the budget deficit above its current forecast of £149bn this year and £121bn in 2011.

Climate Debt Denial Climate Debt Denial Art by Roger Peet At the height of the Washington feeding frenzy about the fiscal cliff, the debt ceiling, and sequestration, austerity hawks coined a new label to denigrate lawmakers who were opposed to cutbacks brought on by the cynical manipulation of national debt: “debt deniers.” Missing from the jousting on Capitol Hill was any mention of climate debt, yet there was plenty of evidence of its unwanted presence. This past year finally saw the climate change threat acknowledged by the world’s leading international finance institutions. In addition, both the IMF and the World Bank have acknowledged that the brunt of the impact will be borne by some of the poorest populations in the world, further jeopardizing their prospects for sustainable development. The debt trap has been a familiar outcome of neoliberal policies such as structural adjustment since the 1970s, but it also builds directly on patterns established through centuries of colonial extraction.

Lawyers, Guns & Money - : Lawyers, Guns & Money Transfinancial Economics Project by Robert Searle Transfinancial Economics (TFE) is an evolving project nearing basic completion. It should be said that there has been a degree of interest in it from a number of people with economic backgrounds such as Warren Mosler, Andy Dennis, Stephen Monrad, David Axelrod, Trond Andresen (cybernetics expert), Prem Sikka, and the noted autodidact, and futurist Hazel Henderson.In April 2010, TFE was also a subject discussed at a major scientific conference (the ICEME, or International Conference of Engineering, and Meta-Engineering, Florida, USA). It is important to add that TFE regards the financial system as a huge global IT system, and recognizes the reality that virtually all money exists as electronic,or digital data transmitted from one bank account to another.This means that the free flow of capital can be tracked, and controlled if necessary. Please note that the following may be subject to changes, and possible corrections. TFE, A Brief Introduction. PS.