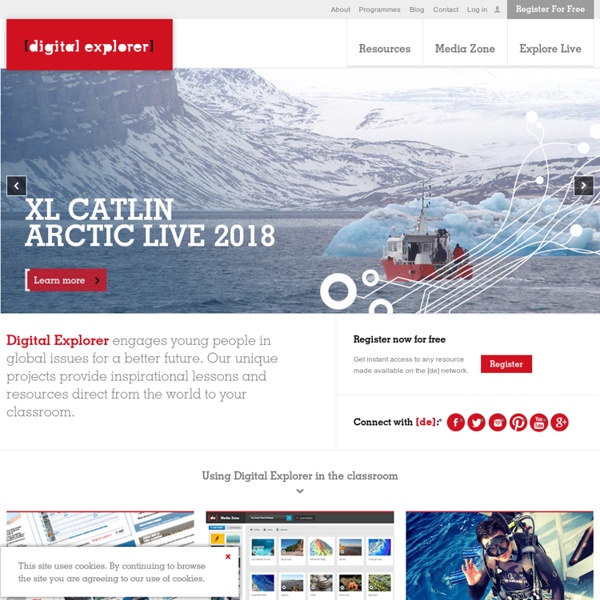 Overview of NIGMS and Computing Life: Computing Life - National Institute of General Medical Sciences Computing Life From text messaging friends to navigating city streets with GPS technology, we're all living the computing life. But as we've upgraded from snail mail and compasses, so too have scientists. Computer advances now let researchers quickly search through DNA sequences to find gene variations that could lead to disease, simulate how flu might spread through your school and design three-dimensional animations of molecules that rival any video game. By teaming computers and biology, scientists can answer new and old questions that could offer insights into the fundamental processes that keep us alive and make us sick.

11 Meaningful Earth Day Activities for Every Grade Level Our students are the future caretakers of our Earth. These fun Earth Day activities help empower kids to have a positive impact on the planet. From recycled art projects to farming simulations, here’s how to roll out the green carpet in your classroom on Earth Day this year. 1. Engineering for Good (6–8) Your middle schoolers know that drinking plenty of H2O is good for them, but they may not realize the impact all those plastic water bottles have on the environment.

Article: Inviting Global Perspectives into the Classroom Article Produced in Partnership with Cisco Education. As our schools and universities prepare students to make a contribution to the world, it is important to benchmark the emerging critical skills they will need to solve increasingly complex problems. As we accelerate the speed of moving data and communications around the world, one strategic skill emerges that we traditionally have not taught: global empathy. Grand Challenges - 14 Grand Challenges for Engineering With input from people around the world an international group of leading technological thinkers were asked to identify the Grand Challenges for Engineering in the 21st Century. From urban centers to remote corners of Earth, the depths of the oceans to space, humanity has always sought to transcend barriers, overcome challenges, and create opportunities that improve life in our part of the universe. In the last century alone, many great engineering achievements became so commonplace that we now take them mostly for granted. Technology allows an abundant supply of food and safe drinking water for much of the world.

Abrupt glacier melt causes Canadian river to vanish in four days Updated A vast glacier-fed river which flowed from Canada's Yukon territory across Alaska to drain into the Bering Sea has disappeared in just four days, in what scientists believe is the first observed case of "river piracy". High average temperatures in the first three months of 2016 caused a dramatic spike in the amount of meltwater flowing from the Kaskawulsh glacier, carving a deep canyon in the ice and redirecting the flow toward the Alsek River in the south, rather than the north-flowing Slims River. That changed the Slims River from a three-metre-deep, raging torrent to a place where "massive afternoon dust storms occurred almost daily", according to a scientific paper published in the journal Nature Geoscience. "We were really surprised when we got there and there was basically no water in the river," lead author Daniel Shugar said of the Slims River. "We could walk across it and we wouldn't get our shirts wet."

Facing the Future All students need opportunities to explore sustainability big ideas in a variety of contexts and disciplines. High quality education for sustainability helps students investigate the meaning and implications of these ideas and to incorporate these ideas into their own thinking, problem solving, and decision-making. Big ideas come in many shapes and sizes, including broad topics or themes difficult problems, or ongoing debates or issues.

iPad Graphic Calculator Apps April 12, 2016 Below are some very good graphing calculators for math teachers and students. Learners can use these apps on their iPads to perform complex mathematical equations, plot graphs, and visualize math notations. For those of you looking for graphing calculators to use on Chrome, check out this page. What the World Would Look Like if All the Ice Melted This story appears in the September 2013 issue of National Geographic magazine. The maps here show the world as it is now, with only one difference: All the ice on land has melted and drained into the sea, raising it 216 feet and creating new shorelines for our continents and inland seas. There are more than five million cubic miles of ice on Earth, and some scientists say it would take more than 5,000 years to melt it all. If we continue adding carbon to the atmosphere, we’ll very likely create an ice-free planet, with an average temperature of perhaps 80 degrees Fahrenheit instead of the current 58. North America

Video Resources for Teaching Math With Pi Day coming up, we wanted to shout out to all the amazing YouTube creators who are making math videos! (Of course, if it's Pi Day videos you want, check out our "Hooray for Pi Day" post.) Math may not seem like a natural fit for the visually-driven medium of video -- but you'd be amazed by the creativity of some of these creators who bring the complexities of all levels of math to life on the small screen. Math teachers, this one's for you! Video Playlist: Best YouTube Channels for Math Teachers What the World Will Look Like 4°C Warmer Micronesia is gone – sunk beneath the waves. Pakistan and South India have been abandoned. And Europe is slowly turning into a desert. This is the world, 4°C warmer than it is now. But there is also good news: Western Antarctica is no longer icy and uninhabitable. Smart cities thrive in newly green and pleasant lands.

Using Labs When you join NOVA Labs, you'­ll be actively participating in science. The data are real. The questions are real. The challenges you'­ll encounter are the same challenges that scientists and engineers are grappling with today. Volcanoes: How often do they erupt and what happens when they do? - Science News - ABC News Planet Earth is covered in hundreds of volcanoes, many of which will be erupting at any one time. Many of us only notice volcanoes when they are about to explode or disrupt our travel plans, but these spectacular forces of nature can have a significant impact on people living in the local area. While volcanoes can be destructive, they are also responsible for creating rich agricultural soil, minerals like gold and silver, diamonds, hot springs and geothermal energy. So how do these iconic wonders form, and what risks do they really pose?

Equation Tools for Math June 29, 2015 Here are four excellent Chrome apps specifically curated for Math teachers and students. These apps are ideal for writing, editing and viewing math formula whether they are simple or complex. One of these tools, TeX equation editor, is integrated with Google Drive so you can easily paste TeX equations right into your Google Docs. 1- Daum Equation Edior 'Edit the formula in this program is designed to quickly and easily. In the editor that provides many types of formulas with just the click of a button you can create a formula. What Causes Ocean Currents? The systems of ocean surface currents and deep water currents are, as expected, connected, but the locations of the physical connections are limited to three areas (one per main ocean), and are all on the Northern Hemisphere. The downwelling occurs on the Northern Atlantic, while the upwelling occurs on the Northern Pacific and the Northern Indian Ocean, as shown on the side map. The extents of the continental shelf block, or at least seriously limit, the movement of the ocean currents. To see a 3D view of the Conveyor Belt enlarge the diagram below. 1. Due to the friction between air and water, winds create surface currents that carry water masses from the equatorial areas toward northern (and southern) polar zones.