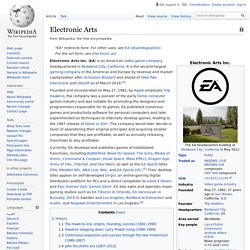 (EA) is an American video game company headquartered in Redwood City, California. It is the second-largest gaming company in the Americas and Europe by revenue and market capitalization after Activision Blizzard and ahead of Take-Two Interactive and Ubisoft as of March 2018.[4] History Trip Hawkins era: origins, founding, success (1982–1990) In February 1982, Trip Hawkins arranged a meeting with Don Valentine of Sequoia Capital[8] to discuss financing his new venture, Amazin' Software. For more than seven months, Hawkins refined his Electronic Arts business plan. Electronic Arts' original corporate logo, designed by Barry Deutsch, 1982–1999.[11] Hawkins liked the word "electronic", and various employees had considered the phrases "Electronic Artists" and "Electronic Arts". He recruited his original employees from Apple, Atari, Xerox PARC, and VisiCorp, and got Steve Wozniak to agree to sit on the board of directors.[14] Games Company structure.

Ninhursag. Sumerian goddess Ninḫursaĝ,[a] also known as Damgalnuna or Ninmah, was the ancient Sumerian mother goddess of the mountains, and one of the seven great deities of Sumer. 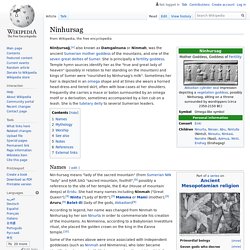 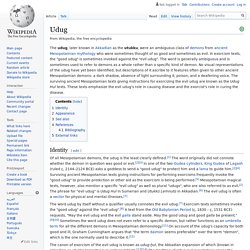 In exorcism texts, the "good udug" is sometimes invoked against the "evil udug". The word is generally ambiguous and is sometimes used to refer to demons as a whole rather than a specific kind of demon. No visual representations of the udug have yet been identified, but descriptions of it ascribe to it features often given to other ancient Mesopotamian demons: a dark shadow, absence of light surrounding it, poison, and a deafening voice. Khumban. Humban-Numena. Humban-Numena (or Kumban-Numena) was a king of Elam from the Igihalkid dynasty (Middle Elamite period, mid-14th century BCE). 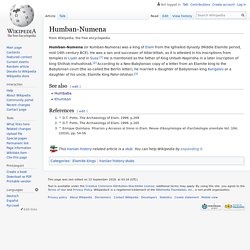 He was a son and successor of Attar-kittah, as it is attested in his inscriptions from temples in Liyan and in Susa.[1] He is mentioned as the father of King Untsah-Napirisha in a later inscription of king Shilhak-Inshushinak.[2] According to a Neo-Babylonian copy of a letter from an Elamite king to the Babylonian court (the so-called the Berlin letter), he married a daughter of Babylonian king Kurigalzu or a daughter of his uncle, Elamite King Pahir-ishshan.[3] See also[edit] Edimmu. The edimmu, read incorrectly sometimes as ekimmu,[1] were a type of utukku in Sumerian religion, similar in nature to the preta of the Hindu religions or the jiangshi of Chinese mythology. 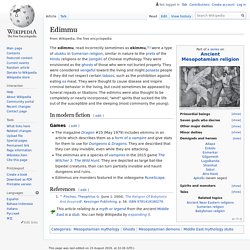 They were envisioned as the ghosts of those who were not buried properly. They were considered vengeful toward the living and might possess people if they did not respect certain taboos, such as the prohibition against eating ox meat. They were thought to cause disease and inspire criminal behavior in the living, but could sometimes be appeased by funeral repasts or libations.

Bes. Egyptian deity Bes (; also spelled as Bisu), together with his feminine counterpart Beset, is an Ancient Egyptian deity worshipped as a protector of households and, in particular, of mothers, children and childbirth. 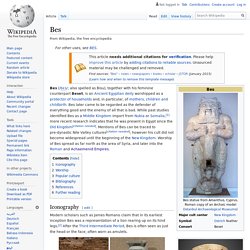 Bes later came to be regarded as the defender of everything good and the enemy of all that is bad. While past studies identified Bes as a Middle Kingdom import from Nubia or Somalia,[1] more recent research indicates that he was present in Egypt since the Old Kingdom[citation needed]. Asag. In the Sumerian mythological poem Lugal-e, Asag or Azag, is a monstrous demon, so hideous that his presence alone makes fish boil alive in the rivers. 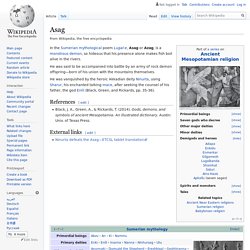 He was said to be accompanied into battle by an army of rock demon offspring—born of his union with the mountains themselves. References[edit] Black, J. A., Green, A., & Rickards, T. (2014). Gods, demons, and symbols of ancient Mesopotamia: An illustrated dictionary. Petra. Ancient historical site in Jordan The trading business gained the Nabataeans considerable revenue and Petra became the focus of their wealth. 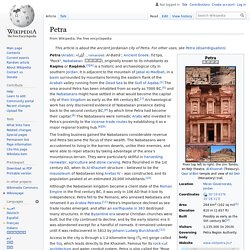 The earliest historical reference to Petra was an unsuccessful attack on the city ordered by Antigonus I in 312 BC and recorded by various Greek historians. The Nabataeans were, unlike their enemies, accustomed to living in the barren deserts, and were able to repel attacks by taking advantage of the area's mountainous terrain. They were particularly skillful in harvesting rainwater, agriculture and stone carving. Petra flourished in the 1st century AD, when its famous Khazneh structure – believed to be the mausoleum of Nabataean king Aretas IV – was constructed, and its population peaked at an estimated 20,000 inhabitants.[6] 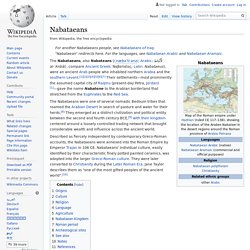 The Nabataeans were one of several nomadic Bedouin tribes that roamed the Arabian Desert in search of pasture and water for their herds.[8] They emerged as a distinct civilization and political entity between the second and fourth century BCE,[9] with their kingdom centered around a loosely controlled trading network that brought considerable wealth and influence across the ancient world. Origins[edit] Gorgoneion. A wooden door panel intended to guard the house from an unwelcome guest (Thomas Regnaudin, former Hôtel des Ambassadeurs de Hollande, rue vieille du Temple, Paris c. 1660). 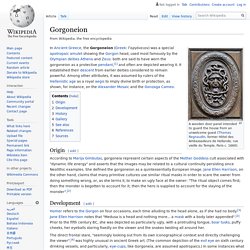 In Ancient Greece, the Gorgoneion (Greek: Γοργόνειον) was a special apotropaic amulet showing the Gorgon head, used most famously by the Olympian deities Athena and Zeus: both are said to have worn the gorgoneion as a protective pendant,[1] and often are depicted wearing it. It established their descent from earlier deities considered to remain powerful. Among other attributes, it was assumed by rulers of the Hellenistic age as a royal aegis to imply divine birth or protection, as shown, for instance, on the Alexander Mosaic and the Gonzaga Cameo. Medusa. Monster from Greek mythology In Greek mythology, Medusa (; Ancient Greek: Μέδουσα "guardian, protectress")[1] also called Gorgo, was one of the three monstrous Gorgons, generally described as winged human females with living venomous snakes in place of hair.

Those who gazed into her eyes would turn to stone. Most sources describe her as the daughter of Phorcys and Ceto,[2] although the author Hyginus makes her the daughter of Gorgon and Ceto.[3] Medusa was beheaded by the Greek hero Perseus, who thereafter used her head, which retained its ability to turn onlookers to stone, as a weapon[4] until he gave it to the goddess Athena to place on her shield. Perseus. Ancient Greek hero and founder of Mycenae Etymology[edit] Because of the obscurity of the name "Perseus" and the legendary character of its bearer, most etymologists presume that it might be pre-Greek; however, the name of Perseus' native city was Greek and so were the names of his wife and relatives. There is some idea that it descended into Greek from the Proto-Indo-European language. Achaemenid Empire. The Achaemenid Empire (/əˈkiːmənɪd/; Old Persian: Pārsa;[9][10] New Persian: شاهنشاهی هخامنشی c. 550–330 BC), or First Persian Empire,[11] was an empire in Western and Central Asia, founded in the 6th century BC by Cyrus the Great.[11] The dynasty draws its name from king Achaemenes, who ruled Persis between 705 BC and 675 BC.

The empire expanded to eventually rule over significant portions of the ancient world, which at around 500 BC stretched from the Indus Valley in the east to Thrace and Macedon on the northeastern border of Greece. The Achaemenid Empire would eventually control Egypt as well. It was ruled by a series of monarchs who unified its disparate tribes and nationalities by constructing a complex network of roads. The historical mark of the Achaemenid Empire went far beyond its territorial and military influences and included cultural, social, technological and religious influences as well. History[edit] Neo-Assyrian Empire. Historical state in Mesopotamia The Neo-Assyrian Empire (Assyrian cuneiform: mat Aš-šur)[a] was an Iron Age Mesopotamian empire, in existence between 911 and 609 BC,[10][11][12] and became the largest empire of the world up until that time.[13][unreliable source?] The Assyrians perfected early techniques of imperial rule, many of which became standard in later empires.[14] The Assyrians were the first to be armed with iron weapons, and their troops employed advanced, effective military tactics.[15]