In the Withdrawal from the Paris Climate Agreement, the Koch Brothers’ Campaign Becomes Overt 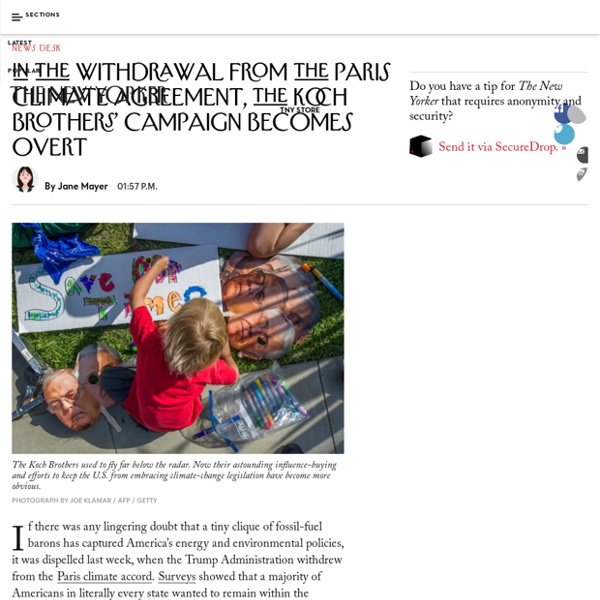 If there was any lingering doubt that a tiny clique of fossil-fuel barons has captured America’s energy and environmental policies, it was dispelled last week, when the Trump Administration withdrew from the Paris climate accord. Surveys showed that a majority of Americans in literally every state wanted to remain within the agreement, and news reports established that the heads of many of the country’s most successful and iconic Fortune 100 companies, from Disney to General Electric, did, too. Voters and big business were arrayed against leaving the climate agreement. Yet despite the majority’s sentiment, a tiny—and until recently, almost faceless—minority somehow prevailed. How this happened is no longer a secret. The answer, as the New York Times reported, on Sunday, is “a story of big political money.” Until recently, those buying the fealty of the Republican Party on these issues tried to hide their sway, manipulating politics from the wings.

It Looks Like the Kochs' Dream of a Right-Wing Constitutional Convention Has Been Roadblocked Photo Credit: DonkeyHotey / Flickr Creative Commons This year's legislative season saw a strong push in the states from right-wing groups, bankrolled by the Koch brothers and other ultra-conservative billionaires, hoping to convene a national constitutional convention in order to inject rigid fiscal constraints into our country's founding document. Advocates of a federal "balanced budget amendment" (BBA) picked up two more states, Wyoming and Arizona, in their drive to win the 34 resolutions needed to bypass Congress and convene a convention to propose changes to the U.S. Constitution. That momentum, however, was blunted by surprisingly successful campaigns to rescind convention calls in three states, New Mexico, Maryland, and Nevada. As a result, BBA proponents now claim 27 states in their column, down from 28 at the beginning of the year.

The Ideologues Who Want to Destroy Democracy to Save Capitalism The Ideologues Who Want to Destroy [...] James Buchanan flashes a smile at a news conference in 1986 at George Mason University after it was announced that he is the winner of the Nobel Memorial Prize in economic science. (Photo by Don Emmert/AFP/Getty Images) Why the Scariest Nuclear Threat May Be Coming from Inside the White House On the morning after the election, November 9, 2016, the people who ran the U.S. Department of Energy turned up in their offices and waited. They had cleared 30 desks and freed up 30 parking spaces. They didn’t know exactly how many people they’d host that day, but whoever won the election would surely be sending a small army into the Department of Energy, and every other federal agency.

Inside the Koch Brothers' Toxic Empire - Rolling Stone The enormity of the Koch fortune is no mystery. Brothers Charles and David are each worth more than $40 billion. The electoral influence of the Koch brothers is similarly well-chronicled. The Kochs are our homegrown oligarchs; they've cornered the market on Republican politics and are nakedly attempting to buy Congress and the White House. Their political network helped finance the Tea Party and powers today's GOP. Koch-affiliated organizations raised some $400 million during the 2012 election, and aim to spend another $290 million to elect Republicans in this year's midterms.

Koch Brothers, Behind Tea Party Wave, Face Democrats' Rising Tide In 2018 Tea Party activists hold a rally on Capitol Hill in 2010. That grassroots movement, with backing from the Koch political network, helped Republicans win back the House in the 2010 midterms. In 2018, the Koch network is on defense against Democratic gains. Chip Somodevilla/Getty Images hide caption toggle caption Chip Somodevilla/Getty Images

How the Koch brothers built the most powerful rightwing group you've never heard of The cries of “Shame! Shame! Shame!” rang throughout the marbled walls of the Wisconsin state assembly chamber. Oil giant Koch Industries try to stop the attempt to expand the electric vehicle federal tax credit - Electrek With a new Republican-backed effort to expand the electric vehicle federal tax credit, the Koch brothers are urging senators to vote against it – putting their political donation dollars at work. The situation around the federal tax credit for EVs is weirder than ever right now. As Tesla hit the threshold to initiate the phase-out, there are two different legislative efforts to change it. Earlier this month, a Republican senator introduced a new bill to end the $7,500 federal tax credit for electric cars and tax them even more instead. But a few days later, another Republican senator proposed a new bill to remove the federal tax credit cap for EVs and expand it to 2022.