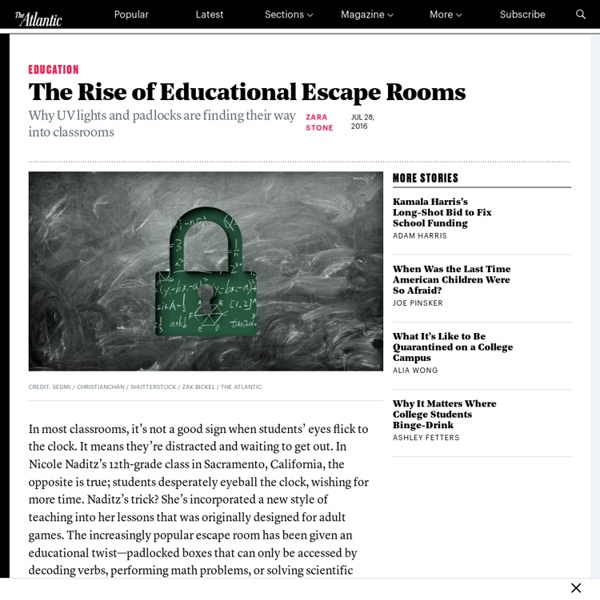 Shauna Pollock, a Toronto-based educator and the author of Creating Classroom Magic, a book about using the Disney-inspired principles of magic, safety, and courtesy in teaching, believes educational escape rooms have enormous potential to be effective in schools, since they can be adapted to any subject. “[They can] excite learners and help develop their skills, teaching them content through immersive, engaging play,” she wrote in a recent paper. This style of puzzle-based learning is well suited for web-based games, which also provide access to a larger audience. In 2012, Arizona State University trialed this by building Science Detectives: Training Room Escape, a click-through online escape room for preK-12 learners. “Instead of the typical lecture, we wanted the student to have fun playing a game that just so happens to require using the Scientific Method to succeed,” said Charles Kazilek, the chief technology officer at Arizona State University.

The game-player’s hat (Barbara Braxton) As the cooler days of Australia’s winter encroach, more and more students make their way to the library as a warm haven during recess and lunch breaks. But to expect them all to want to curl up and read for that time may be a bit ambitious so this is a perfect opportunity to introduce them to some of the “old-fashioned” board and card games of yesteryear. Those of us of a certain vintage may well remember the family nights where televisionwas turned off (if there were a television) and games like Monopoly, Scrabble and Squatter would be set up or a lively game of cards would ensue.

This is My Teacher Costume: #eduescape - Escape Rooms in Education My brother, Charlie (this post is dedicated to him, the day after his birthday! Happy Birthday, Charlie!) and his partner, Ashton introduced me to Escape Rooms nearly a year ago. We were in New York City for New Year's 2015 and they insisted that I come play an immersive game with them. How to create an educational escape room for your class - Classcraft Blog As soon as we enter the room, the gamemaster locks the door behind us. There are multiple clues to lead us to salvation, and we have one hour to find them and make our escape. This kind of entertainment is better than going to a movie. In escape rooms, you and your friends are united in one goal: leaving that ominous place. Talking is not a luxury; it is a must.

Learning from Escape Rooms Commercial escape rooms get around this in two ways. First, they make all information readily available. They can’t rely on people coming into their escape rooms with prior knowledge of Edison, the Cold War, or whatever else their scenario is based of off. For teachers, however, giving students the opportunity to recall material in a new context is part of the appeal and advantage of escape rooms. Using the Gamification User Types in the Real World One of the main questions I get about my User Types, is how do you actually make use of them? What I have provided is a simple framework to look at basic motivations of users who are using your system. However, if it was just an analytical tool, it would not be all that much use really! The main reason I developed the user types was to help you in the planning and design phase – not just with analytics and improvements! There are two main ways to go about using the user types in the early phases of your design. Survey the populous

ABC OF GAMIFICATION – ED Blog Knowledge Sharing Gone are the days of going through hours of learning content sitting back-to-back on your desktop. Today, you can quickly learn on your smart phone while travelling to work. Introduction of gamification in the learning environment adds to the engagement and overall experience. Game-based learning designed for a global environment conservation organization How to create an educational escape room for your class - Classcraft Blog As soon as we enter the room, the gamemaster locks the door behind us. There are multiple clues to lead us to salvation, and we have one hour to find them and make our escape. This kind of entertainment is better than going to a movie. In escape rooms, you and your friends are united in one goal: leaving that ominous place. Talking is not a luxury; it is a must. You have be a team to win.

Educational Escape Rooms An escape room is a physical adventure game in which players are ‘locked’ in a room and have to use elements within it to solve a series of puzzles which allow them to escape within a set time limit. The games are physical versions of “escape the room” video games, similar to the Crystal Maze. Games are set in a variety of fictional locations, such as prison cells, dungeons and space stations, and are popular as team building exercises and corporate away days. EscapED (part of the GameChangers initiative) has taken the concept of the escape room and repurposed it for use in Higher Education. The emphasis of the educational escape room is not on the learning within the allotted time of the game itself, but rather in the reflective process within the debrief period. The game itself merely provides the mechanism for which to create a rich reflective process focused around team dynamics and communication.

101 Best Escape Room Puzzle Ideas – Nowescape Q: What’s the ultimate win for an escape game operator? A: Making a group of players want to simultaneously curse you and high-five you. Seriously! When escape room players love you and hate you at the same time, you’re doing something right! To run a truly great escape room, your puzzles must be challenging, unique . . . and FUN!