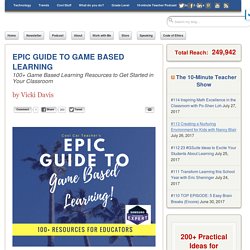 We can use them to teach. It isn’t that hard. Game based learning excites learning in my classroom. It can ignite your classroom too. In this post, I’ll share what I’m doing in my classroom. Games in Libraries – brought to you by ALA GameRT. CENZ presents Bron Stuckey. PD Series: Gamification of Information Literacy Learning. The game-player’s hat (Barbara Braxton) As the cooler days of Australia’s winter encroach, more and more students make their way to the library as a warm haven during recess and lunch breaks. 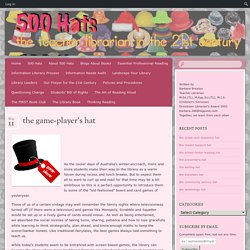 But to expect them all to want to curl up and read for that time may be a bit ambitious so this is a perfect opportunity to introduce them to some of the “old-fashioned” board and card games of yesteryear. Those of us of a certain vintage may well remember the family nights where televisionwas turned off (if there were a television) and games like Monopoly, Scrabble and Squatter would be set up or a lively game of cards would ensue. As well as being entertained, we absorbed the social niceties of taking turns, sharing, patience and how to lose gracefully while learning to think strategically, plan ahead, and know enough maths to keep the scorer/banker honest.

Like traditional fairytales, the best games always had something to teach us. Where History Comes Alive: Augmented Reality in Museums. “Museums will need to do everything they can to engage with their public, through their displays, education and outreach programs, and by being as open as possible to what their audience wants. 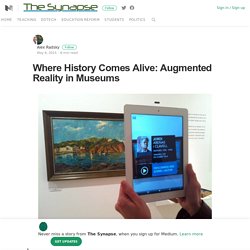 Museums are much more than repositories of objects; they are meeting places for people and ideas. Their future depends on remaining a dynamic part of the public realm.” Playing games at the Library: Seriously? 1. 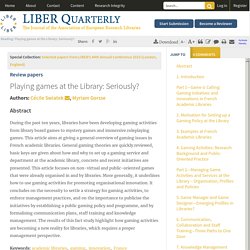 Introduction “Man only plays when in the full meaning of the word he is a man, and he is only completely a man when he plays” (Schiller, 1902). 25 years after Ray Oldenburg (1989) described his “third place” theory, French academic libraries started developing game practices with their publics. How virtual reality technology is changing the way students learn. For many years, schools and universities have had to change the way they work and teach in order to fit in with technology. 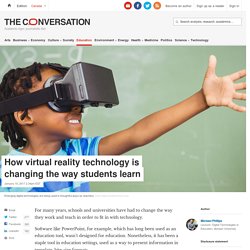 Software like PowerPoint, for example, which has long been used as an education tool, wasn’t designed for education. Nonetheless, it has been a staple tool in education settings, used as a way to present information in template, bite-size formats. But this isn’t always a good thing. The use of digital technologies sees some teachers and students presenting information using templates, which means much of the individual character of teachers’ practices can be lost.

Research shows that software such as PowerPoint can homogenise and sanitise the way teachers present information to their students. Board Games in the Library – Teen Services Underground. When the average person thinks of board games, they likely think of games like Sorry, Monopoly, and Risk. 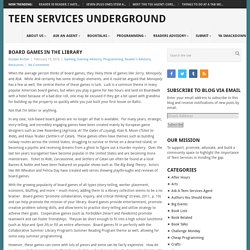 While Risk certainly has some strategic elements, and it could be argued that Monopoly has a few as well, the central theme of these games is luck. Luck is a common theme in many popular American board games, but when you play a game for two hours and land on Boardwalk with a hotel because of a bad dice roll, one may be excused if they get a bit upset with grandma for building up the property so quickly while you just built your first house on Baltic. Not that I’m bitter or anything. Extra Credits. Digital Technologies Hub. 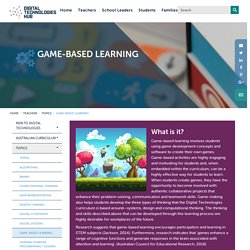 Game-Based Learning: Resource Roundup. Overcoming 10 Common Obstacles of Game-Based Teaching. Game-based teaching is an exciting adventure for any teacher to embark on with their students. 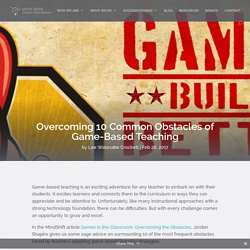 It excites learners and connects them to the curriculum in ways they can appreciate and be attentive to. Unfortunately, like many instructional approaches with a strong technology foundation, there can be difficulties. Use Classic Games to Ignite Student Engagement. As a new middle school media specialist in a school that serves students in grades 5 through 8, I spent most of last year collaborating with Sara, our school's instructional technology facilitator. 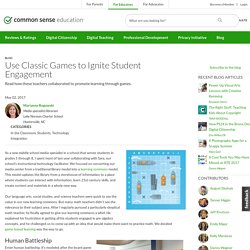 We focused on converting our media center from a traditional library model into a learning commons model. This model updates the library from a storehouse of information to a place where students can interact with information, learn 21st-century skills, and create content and materials in a whole new way. Our language arts, social studies, and science teachers were quick to see the value in our new learning commons.

But many math teachers didn't see the relevance to their subject area. After I regularly pursued a particularly skeptical math teacher, he finally agreed to give our learning commons a whirl. AR, VR Lead Top Tech Trends Discussion. Augmented reality (AR) technology is not new, but the growing ubiquity of smartphones is making it possible for libraries and other cultural institutions to create new applications that allow patrons to explore collections in new and exciting ways, Cynthia Hart, emerging technologies librarian, Virginia Beach Public Library, explained during the Library Information Technology Association’s (LITA) Top Tech Trends panel on January 22 at the American Library Association’s Annual Midwinter conference in Atlanta. 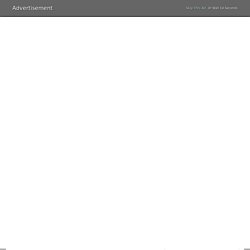 AR can be traced back to heads up displays used in airplanes in the 1950s, and mainstream use has been growing since the 2000 release of Hirokazu Kato’s open source ARToolKit, which enables the overlay of computer generated imagery on video, Hart noted. “I do think it is a tool that we can use very easily at libraries and museums to assist our customers in a variety of different ways—providing information, providing navigation, or just answering questions,” she said.

Virtual Growth. Play as an approach – It Happened in the Library. Play is not so much an activity as it is an approach. It is a very particular, instinctual, joyous approach towards interacting with our environment and each other. It is not something that only children do. Our play oriented activities may change as we progress through life, but the instinct towards play as a style of engagement with our world and each other, remains.

Sure… some of us may have lost the spontaneity we had as children. But perhaps all we need is a nudge, an idea, or an irresistible invitation. 12 Surprising Things Your Child Can Learn from Minecraft. Video gaming has been seen by some detractors as a passive, mind-numbing activity that has an adverse effect on children’s social development. In fact, research indicates the exact opposite. There are a number of benefits to playing video games, including cognitive development, motor skill development, and creative problem solving. In particular, games like Minecraft have been shown to affect cognitive skills in a variety of positive ways, and is now being used in schools across the globe for its surprising educational benefits.

With this infographic we explore 12 Surprising Things Your Child Can Learn From Minecraft, and in doing so, unlock some of the most important reasons why the game is considered the greatest educational game of its generation. Will virtual and augmented reality move us into the knowledge age? 3 Ways to Use Game-Based Learning. What exactly is game-based learning, anyway? Is it a roomful of children playing video games? Is it students designing games? Or is it both of these? Game­-Based or Playful Learning, not Gamification for All Things. Developing Literacy Skills with Video Games in Education. Games in education are nothing new.

Because of their strategic nature that they share with subjects such as math, reading and writing, games have been used in the K-12 curriculums for decades. What is new is the use of a specific type of game for these subjects: the video game. This is especially the case with language arts. Like comic books, video games (including computer or PC games) in language arts curriculum have been controversial over whether they’re appropriate learning tools. Disruptive technology: Gamification. The ILN has looked at games in libraries in a previous discussion topic in 2015. More specifically though, gamification, “the use of game mechanics and experience design to digitally engage and motivate people to achieve their goals” (Burke, 2014), is being used in libraries to disrupt the customary orientation programs, and the usual methods of teaching information literacy. This post will look into the specifics of game elements, and some programs that can be used to build these gamified programs.

Related:  *Find the Learning in Any Game   -  12 Surprising Things Your Child Can Learn from Minecraft   -  Educational Escape Rooms Engage Students with Innovative Puzzles and Tasks - The Atlantic   -  Education   -  Enterprise