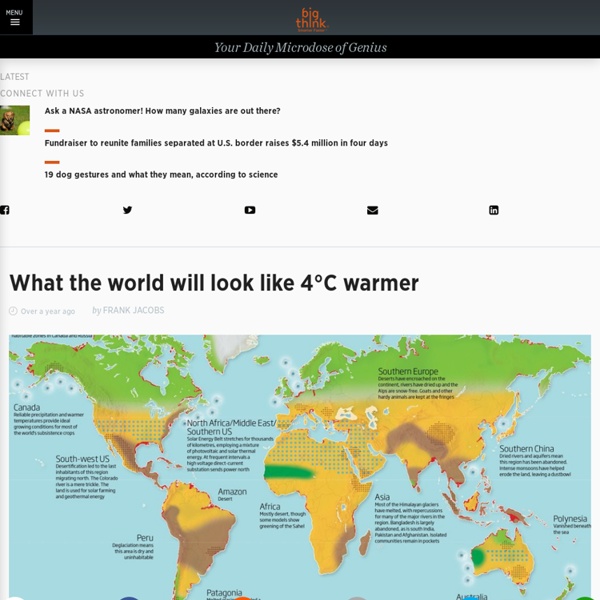 Micronesia is gone – sunk beneath the waves. Pakistan and South India have been abandoned. And Europe is slowly turning into a desert. This is the world, 4°C warmer than it is now. But there is also good news: Western Antarctica is no longer icy and uninhabitable. Smart cities thrive in newly green and pleasant lands. This map, which shows some of the effects a 4°C rise in average temperature could have on the planet, is eight years old, but it seems to get more contemporary as it ages (and the planet warms). Few serious scientists doubt that climate change is happening, or that it is man-made. Those on the fact-based side of this argument should realise that continuously bombarding the opposition with doom and gloom is likely to reinforce their resistance to accepting the new paradigm. This map offers an alternative: lots of misery and disaster, but also plenty of hope and solutions. First, the bad news. Orange is not much better: 'Uninhabitable desert'. But there is a flipside.

What the World Would Look Like if All the Ice Melted This story appears in the September 2013 issue of National Geographic magazine. The maps here show the world as it is now, with only one difference: All the ice on land has melted and drained into the sea, raising it 216 feet and creating new shorelines for our continents and inland seas. There are more than five million cubic miles of ice on Earth, and some scientists say it would take more than 5,000 years to melt it all. If we continue adding carbon to the atmosphere, we’ll very likely create an ice-free planet, with an average temperature of perhaps 80 degrees Fahrenheit instead of the current 58. North America The entire Atlantic seaboard would vanish, along with Florida and the Gulf Coast.

Abrupt glacier melt causes Canadian river to vanish in four days Updated A vast glacier-fed river which flowed from Canada's Yukon territory across Alaska to drain into the Bering Sea has disappeared in just four days, in what scientists believe is the first observed case of "river piracy". High average temperatures in the first three months of 2016 caused a dramatic spike in the amount of meltwater flowing from the Kaskawulsh glacier, carving a deep canyon in the ice and redirecting the flow toward the Alsek River in the south, rather than the north-flowing Slims River. 11 Meaningful Earth Day Activities for Every Grade Level Our students are the future caretakers of our Earth. These fun Earth Day activities help empower kids to have a positive impact on the planet. From recycled art projects to farming simulations, here’s how to roll out the green carpet in your classroom on Earth Day this year.

Volcanoes: How often do they erupt and what happens when they do? - Science News - ABC News Planet Earth is covered in hundreds of volcanoes, many of which will be erupting at any one time. Many of us only notice volcanoes when they are about to explode or disrupt our travel plans, but these spectacular forces of nature can have a significant impact on people living in the local area. While volcanoes can be destructive, they are also responsible for creating rich agricultural soil, minerals like gold and silver, diamonds, hot springs and geothermal energy. So how do these iconic wonders form, and what risks do they really pose? What is a volcano? What Causes Ocean Currents? The systems of ocean surface currents and deep water currents are, as expected, connected, but the locations of the physical connections are limited to three areas (one per main ocean), and are all on the Northern Hemisphere. The downwelling occurs on the Northern Atlantic, while the upwelling occurs on the Northern Pacific and the Northern Indian Ocean, as shown on the side map. The extents of the continental shelf block, or at least seriously limit, the movement of the ocean currents.

40 maps that explain the world By Max Fisher By Max Fisher August 12, 2013 Maps can be a remarkably powerful tool for understanding the world and how it works, but they show only what you ask them to. So when we saw a post sweeping the Web titled "40 maps they didn't teach you in school," one of which happens to be a WorldViews original, I thought we might be able to contribute our own collection. Australia's pollution mapped by postcode reveals nation's 'dirty truth' Updated about an hour agoFri 16 Nov 2018, 2:53am On the fringes of Australia's biggest cities, people work, live, and play next to some of the nation's biggest polluters. Key points: National Pollution Inventory data has been mapped according to postcodes The Australian Conservation Foundation report reveals the country's most-polluted postcodesBotany Bay in Sydney and Altona in Melbourne are the cities' most-polluted areas For the first time, Australia's pollution has been mapped by postcode in a report titled The Dirty Truth by the Australian Conservation Foundation (ACF). Some of the areas identified as being the most polluted in Australia's capital cities include:

When water is scarce, we can't afford to neglect the alternatives to desalination This is the second of two articles looking at the increasing reliance of Australian cities on desalination plants to supply drinking water, with less emphasis on the alternatives of water recycling and demand management. So what is the best way forward to achieve urban water security? An important lesson from the Millennium Drought in Australia was the power of individuals to curb their own water use. This was achieved through public education campaigns and water restrictions.

Cities turn to desalination for water security, but at what cost? This is the first of two articles looking at the increasing reliance of Australian cities on desalination to supply drinking water, with less emphasis on alternatives such as recycling and demand management. So what is the best way forward to achieve urban water security? Removing salts and other impurities from water is really difficult. For thousands of years people, including Aristotle, tried to make fresh water from sea water. In the 21st century, advances in desalination technology mean water authorities in Australia and worldwide can supply bountiful fresh water at the flick of a switch. Achieving water security using desalination is now a priority for the majority of Australia’s capital cities, all but one of which are on the coast.

Where does rain come from? - Science (2) - ABC Splash - Overview Rain comes from clouds but do you know how rain gets into clouds? This clip shows how clouds are formed (made). You will see how important the Sun is in making it rain. 47 secs Earth needs its atmosphere! - Science (10) - ABC Splash - Overview Discover why the atmosphere is crucial to life on Earth. Learn how the atmosphere creates the weather and clouds, and provides blue skies and red sunsets. See how worldwide wind patterns form. View scientists investigating how greenhouse gases have changed over thousands of years, and what the recent dramatic changes could mean for life on Earth. KML Archive Introduction I am a British/American volcanologist, neogeographer and undergraduate educator. My scientific interests incorporate a mixture of physical volcanology, geomorphology, remote sensing and other geospatial tools, such as Google Earth. My goals are to promote understanding and of the form and processes of the world around us through the use of innovative technologies. Map Data Map data ©2014 Google