A Story of Slavery in Modern America - The Atlantic 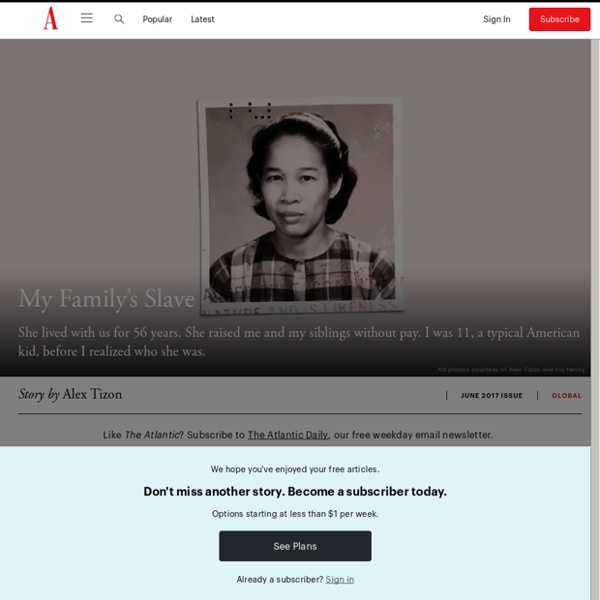 点击这里阅读中文版本 (Chinese) | Basahin ang artikulong ito sa Tagalog (Tagalog) Alex Tizon passed away in March. He was a Pulitzer Prize–winning journalist and the author of Big Little Man: In Search of My Asian Self. For more about Alex, please see this editor’s note. The ashes filled a black plastic box about the size of a toaster. It weighed three and a half pounds. Her name was Eudocia Tomas Pulido. Listen to the audio version of this article:Feature stories, read aloud: download the Audm app for your iPhone. To our American neighbors, we were model immigrants, a poster family. After my mother died of leukemia, in 1999, Lola came to live with me in a small town north of Seattle. At baggage claim in Manila, I unzipped my suitcase to make sure Lola’s ashes were still there. Early the next morning I found a driver, an affable middle-aged man who went by the nickname “Doods,” and we hit the road in his truck, weaving through traffic. Slavery has a long history on the islands. I was 13. “Yes.

Free with No Registration Required You must have an OLD browser. The old crossword maker doesn't allow all of the new features like cool fonts, adding images, shadows, special colors, and much more coming in the furture like saving, and being playable online. You can upgrade your browser to IE 9+ or better yet, get the Google Chrome browser and enjoy all of those great features. Not convinced? You can go to the old version by clicking choosing it below. 2 reasons crosswords will not generate: 'Lola' Pulido lived life of devotion to family Originally published November 19, 2011 at 9:26 PM | Page modified May 17, 2017 at 1:19 PM Editor's note (May 17, 2017): This obituary, published in 2011, was written at the suggestion of and after an extensive interview with Alex Tizon, a former Seattle Times reporter. This week, a story in the June 2017 issue of The Atlantic written by Tizon, who died earlier this year, describes Eudocia Tomas Pulido as a slave and details her relationship with his family spanning decades. The Seattle Times is shocked at the newly revealed disparity in Tizon's accounts of her life and wrote more about it here. This page is from an old version of The Seattle Times' website.

The White Rhino: A Chicago Latino English Teacher Part I: Introduction--What inspired my argumentative response? For decades, too many high-school teachers have been instilling persuasive writing skills by teaching students the five-paragraph essay. You know it: Introduction with three reasons Reason #1 The truth about false rape accusations False rape accusations loom large in the cultural imagination. We don’t forget the big ones: The widely-read 2014 Rolling Stone article, later retracted, about a brutal gang rape at the University of Virginia; the 2006 accusations against innocent members of the Duke University lacrosse team. These cases are readily cited by defense attorneys and Republican lawmakers and anyone else who wants a reason to discuss the dangers of false allegations. What if a woman has consensual sex, and then regrets it the next day? What if a woman gets dumped by her boyfriend and decides to accuse him of rape as revenge?

Teacher: Why it is ridiculous not to teach Shakespeare in school - The Washington Post I’ve been inundated with e-mails from teachers and other Shakespeare lovers yelling about a post published early Saturday (which you can read here) by a high school teacher who says she doesn’t want to teach the Bard anymore. Why? Because, she said, she doesn’t like his work and thinks that there other works of literature from different cultures that speak to the human condition as well as or better than Shakespeare that would be more engaging to students. As you might expect, I’ve been called all kinds of names for posting the piece, and the author — whose opinion, by the way, is shared by a lot of people in and out of education — has been pilloried too. I happen to love Shakespeare, and would be sorry if students were not exposed to his works, but I post a lot of pieces on this blog with which I find interesting even if I don’t agree.

50 Free Animation Tools And Resources For Digital Learners 50 Animation Tools & Resources For Digital Learners by Lisa Chesser, opencolleges.edu.au A purple monster with wild curls spiraling out of control explains the economics of oil production in the Sudan to students in Los Angeles, Sydney, Berlin, Jerusalem, and Riyadh. That is education and animation working together to teach students everywhere, everything they ever wanted to know. Educators need only utilize the tools available, most of them for free.

Teacher: Why I don’t want to assign Shakespeare anymore (even though he’s in the Common Core) - The Washington Post A flaming depiction of William Shakespeare during a fireworks display in England on April 23, 2014. (Reuters/Suzanne Plunkett) A new report on the teaching of Shakespeare in higher education found that English majors at the vast majority of the country’s most prestigious colleges and universities are not now required to take an in-depth Shakespeare course — but the Bard remains a fixture in high school English classes. In fact, studying Shakespeare is a requirement in the Common Core English Language Arts standards, mentioned in specific standards throughout high school. For example, in ninth and tenth grades:

50 awesome literary t-shirts for book lovers We maintain this blog by recommending products on the web. If you buy an item by following the links in this post, we may get a small share of the revenue. In the list below, you’ll find a dream apparel for every book lover – literary t-shirts and other clothes. “I like big books and I cannot lie” – this quote by Jim C. Hines is the most commonly used phrase on mugs, t-shirts, bags and everything else. You won’t find it in this overview.

Boston's EMPath Program Uses Science to Fight Family Poverty - The Atlantic “The Family Carpool Lane Tool,” meanwhile, helps parents and their children align individual and family goals. Working together, they can avoid traffic and cruise through the fast lane. Intergen mentors visit participating families and facilitate conversations that prompt both adults and children to make future-oriented and contextualized decisions, ones that take into account other important domains. Their goal is to help the adults in the families become mentors for themselves and their children. Eventually, they hope, they make their own contributions obsolete. Stephanie Brueck, the senior coordinator of the Intergenerational Mobility Project, recently sat down with a single mom, Ginnelle V., who asked her last name not be used to preserve her family’s privacy, and Ginnelle’s five children, four girls and one boy who range in age from kindergarten through college-aged.

Having Just One Black Teacher Can Keep Black Kids In School : NPR Ed How important is it to have a role model? A new working paper puts some numbers to that question. Having just one black teacher in third, fourth or fifth grade reduced low-income black boys' probability of dropping out of high school by 39 percent, the study found. And by high school, African-American students, both boys and girls, who had one African-American teacher had much stronger expectations of going to college. Keep in mind, this effect was observed seven to ten years after the experience of having just one black teacher. The study is big.

The Distraction Of Racism And The Bipartisan Roots Of Chicago’s Black Suffering There’s a Toni Morrison quote I used to bristle at: “The function of racism is distraction.” I had never read the full context of this quote and initially, I thought this was another attempt to dismiss racism as a primary societal ill deserving of discussion, while prompting us to start paying attention to the “real” issue ie;- classism. This is an idea that’s frequently purported by clueless celebrities, people who just finished reading Rich Dad/Poor Dad, and that Black Capitalism group whose posts your cousin shares on your Facebook news feed.

Five on the Black Hand Side: Origins and Evolutions of the Dap Five on the Black Hand Side is a project exploring gestural languages that were born in African American communities during the 1960s and 1970s, including the “the dap” and the black power handshake. When we see youths, athletes, or even President Obama giving a fist bump or dap, we think of these gestures as mere greetings and are not aware of the origins and historical significance of these languages. Historically, the dap is both a symbol among African American men that expresses unity, strength, defiance, or resistance and a complex language for communicating information. The dap and the black power handshake, which evolved from the dap, were important symbols of black consciousness, identity, and cultural unity throughout black America.

Is It Better to Blend Your Food? - The Atlantic Imagine you have a glass of water and a plate of chicken, broccoli, and mushrooms. If you were already imagining that, keep imagining it. Then consider a non-trivial question: Would it be better to eat it as it is, or blend it all together and drink it? Not many people choose the latter. But among them would be hunger expert Robin Spiller, director of biomedical research at the Nottingham Digestive Diseases Centre in the U.K. And he has data and a deeply considered health argument on his side.

What is white culture, exactly? Here's what the stats say A few months after I moved to New York, a magical conversation happened that would radically shift my psyche forever. I was telling my friend that I had gone to his favorite shop and he asked: “Who served you? Was it the tall white guy?” I frowned and replied, “Are the rest of the staff not white?”