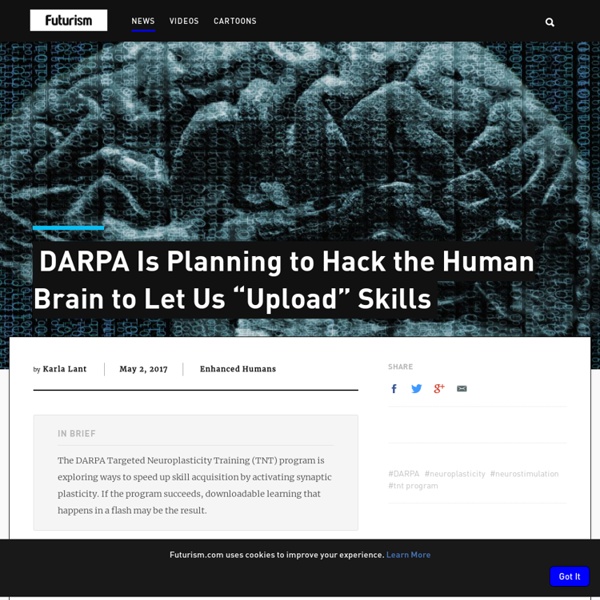 In Brief The DARPA Targeted Neuroplasticity Training (TNT) program is exploring ways to speed up skill acquisition by activating synaptic plasticity. If the program succeeds, downloadable learning that happens in a flash may be the result. Mindhack For Faster Learning In March 2016, DARPA — the U.S. military’s “mad science” branch — announced their Targeted Neuroplasticity Training (TNT) program. The TNT program aims to explore various safe neurostimulation methods for activating synaptic plasticity, which is the brain’s ability to alter the connecting points between neurons — a requirement for learning. The ideal end benefit for this kind of breakthrough would be downloadable learning. First Neurostimulation, Then Application As part of the TNT program, DARPA is funding eight projects at seven institutions. If the TNT program succeeds, striving to be all you can be may mean learning at a much faster pace, and not just for military personnel.

Google’s New AI Is Better at Creating AI Than the Company’s Engineers In Brief At its I/O '17 conference this week, Google shared details of its AutoML project, an artificial intelligence that can assist in the creation of other AIs. By automating some of the complicated process, AutoML could make machine learning more accessible to non-experts. When people work together, they’re literally on the same wavelength, brain waves show Thanks to scientists who have ventured outside the laboratory, we have learned that tight-knit groups of females experience synchronized menstrual periods over time, that cohesive groups engaged in decision-making discount dissenting viewpoints in the interests of consensus, and that couples who stay together long enough begin to look alike. Psychology researchers at New York University equipped each of 12 high school seniors with a portable, low-cost electroencephalogram and gathered the gadgets’ brain-wave readings over a semester’s worth of biology classes (11 sessions lasting 50 minutes each). Writing in the journal Current Biology, the researchers reported that when students were most engaged with each other and in group learning, the readings on their electroencephalograms, or EEGs, tended to show brain-wave patterns that rose and dipped in synchrony. That neural synchrony was most pronounced when students reported they liked their teacher.

Teaching machines to understand – and summarize – text We humans are swamped with text. It’s not just news and other timely information: Regular people are drowning in legal documents. The problem is so bad we mostly ignore it. Every time a person uses a store’s loyalty rewards card or connects to an online service, his or her activities are governed by the equivalent of hundreds of pages of legalese. Most people pay no attention to these massive documents, often labeled “terms of service,” “user agreement” or “privacy policy.” These are just part of a much wider societal problem of information overload. Majority of military discharges for misconduct linked to brain injury, mental health – GAO More than six in 10 service members who were discharged for misconduct had a brain injury or mental health condition, and many of them are potentially ineligible to receive health benefits from the Department of Veterans Affairs, a new report has found. The US Government Accountability Office (GAO), an independent government watchdog agency, reported that 57,141 of the 91,764 service members who were separated or discharged for misconduct from fiscal years 2011 through 2015 had been diagnosed with post-traumatic stress disorder (PTSD), a traumatic brain injury (TBI), or another mental health condition at least two years before their separation. Using data from the Department of Defense’s Defense Manpower Data Center (DMDC), the DOD’s Defense Health Agency (DHA), and the Veterans Benefits Administration, the report found that 16 percent of troops discharged for misconduct had been diagnosed with TBI or PTSD. Read more

Twenty years on from Deep Blue vs Kasparov: how a chess match started the big data revolution On the seventh move of the crucial deciding game, black made what some now consider to have been a critical error. When black mixed up the moves for the Caro-Kann defence, white took advantage and created a new attack by sacrificing a knight. In just 11 more moves, white had built a position so strong that black had no option but to concede defeat. The loser reacted with a cry of foul play – one of the most strident accusations of cheating ever made in a tournament, which ignited an international conspiracy theory that is still questioned 20 years later.

Your Brain Is Trying to Show You The Future In the Spider-Man films, the geeky superhero is gifted with an internal alarm system that warns him of danger moments before it hits. But it turns out that all humans have a skill that helps them dodge dangerous situations. A new study has found that when we anticipate an event, we automatically visualise it in ‘fast-forward’ beforehand.

Why we don't trust robots Robots raise all kinds of concerns. They could steal our jobs, as some experts think. And if artificial intelligence grows, they might even be tempted to enslave us, or to annihilate the whole of humanity. The reason Steve Jobs didn't let his children use an iPad The success of devices like the iPod, iPad and iPhone made Steve Jobs a household name and earned him billions of dollars. However, despite spending his life creating one of the world's biggest technology empires, he took a fairly strict view on gadgets when it came to his children. Writing in the New York Times in 2014, Nick Bilton recalled a conversation he had with the late Apple chief executive (whose birthday is 24 February) after the launch of the first iPad. Asking whether his children liked the new device, Jobs replied: "They haven't used it.

Get Ready: Elon Musk Is Releasing Details on His Plan to Unite Our Brains With AI Details Coming Monday A few weeks ago, details leaked that Elon Musk had backed a brain-computer interface venture founded to allow humans to keep up with the advancements made in machine intelligence. The company – Neuralink – is still in the earliest stages of development. Why Do So Many Smart People Use Dumb Phones? – TheBlaze Wherever you go, people are on their “smartphones.” In airports, restaurants or on the street, people are almost permanently glued to their devices, obsessed with the idea that they cannot exist without being connected to the cyber world. Thus, they text and tweet, email and Google, follow and like in an effort to be constantly present online. It has become part of a “normal” existence in today’s postmodern world. However, not everyone is connected. A growing number of smartphone dissenters are trading in their passport to the digital world.

Ban 'killer robots' to protect fundamental moral and legal principles When drafting a treaty on the laws of war at the end of the 19th century, diplomats could not foresee the future of weapons development. But they did adopt a legal and moral standard for judging new technology not covered by existing treaty language. This standard, known as the Martens Clause, has survived generations of international humanitarian law and gained renewed relevance in a world where autonomous weapons are on the brink of making their own determinations about whom to shoot and when. The Martens Clause calls on countries not to use weapons that depart “from the principles of humanity and from the dictates of public conscience.” I was the lead author of a new report by Human Rights Watch and the Harvard Law School International Human Rights Clinic that explains why fully autonomous weapons would run counter to the principles of humanity and the dictates of public conscience.

Some college kids spend a fifth of class time on digital devices (HealthDay)—College students spend one-fifth of their time in class using digital devices—such as smartphones—for non-educational purposes, new research reveals. The main culprit is texting. Almost nine out of 10 reported that texting was their main digital diversion while in class. Why humans love robots By S. Brent Rodriguez-Plate5 minute Read Japanese customers have already bought over 20,000 units, and it is expected to come to the U.S. before the holiday gift-buying season–at a price nearing US$3,000. Why would anyone pay so much for a robotic dog? My ongoing research suggests part of the attraction might be explained through humanity’s longstanding connection with various forms of puppets, religious icons, and other figurines, that I collectively call “dolls.”